The air was stuffy in the French press room of the European Council building, which was crowded with journalists. Everyone wanted to see the new French president during his first press conference after a European Union summit. Shortly after 1 o'clock on Thursday morning, François Hollande held court just as his predecessor, Nicolas Sarkozy, once had, explaining his "vision for growth" for nearly an hour.

In the room next door was German Chancellor Angela Merkel. In front of her were just a few rows of chairs and some cameras, and the room was half empty. She had decided not to hold a full press conference. Instead, she gave a brief statement, answered two questions and left after five minutes. She apparently knew that she didn't have much of a chance against the appeal of her new French counterpart. It almost seemed as if she was happy to concede the stage to Hollande without a fight.

The parallel appearances in Brussels in the early hours of Thursday had symbolic value. It was the first EU summit in years which was not dominated by Merkel. Instead, Hollande set the tone at the informal dinner attended by the leaders of the 27 EU member states, even if he only spoke briefly himself and showed surprise at the lengthy comments of some of his colleagues.

But with his demand for euro bonds, he set the main topic of discussion at the dinner. Hollande has deliberately put the controversial proposal for jointly issued bonds at the center of his growth agenda. His aim is to challenge the German chancellor. His unspoken message at the summit was that Merkozy, and the symbiotic relationship between Merkel and Sarkozy, was history. In the future, France will assert itself again.

Hollande's desire to distance himself from Merkel is partly inspired by electioneering. On June 17, the French will vote for a new parliament. During the election campaign, the Socialist Hollande cannot afford to be perceived as a puppet of the conservative German chancellor.

Although Hollande said that he didn't want to make any decisions without Germany, the summit marks a striking change: It is the first time in years that the German and French leaders did not meet ahead of the summit to agree on a common position. Instead, on Wednesday evening they found themselves in opposing camps. Hollande argued that euro bonds are part of the debate on growth. They would benefit countries such as Spain by allowing them to save money on interest payments which they could reinvest elsewhere, he said. Merkel countered that jointly issued bonds violate EU law and are not a suitable tool to promote growth in Europe.

During the dinner, it became difficult to keep track of the various positions. One leader after another took turns to speak, arguing for or against euro bonds. According to participants, the tone remained friendly, but the positions became hardened. Hollande received support from countries such as Italy, Austria and Ireland, while the Finns, Swedes and Dutch were on Merkel's side. Ahead of the summit, Dutch Prime Minister Mark Rutte had said it was possible to "withstand" the pressure from France. Merkel, therefore, is not entirely isolated in her struggle against Hollande.

Speaking afterwards, Hollande said that there were even countries that are more strongly opposed to euro bonds than Germany. He did not want to reveal which camp was larger. "We did not count," he said, explaining that there were more than just two positions. Some countries, he said, can only imagine joint bonds happening in the distant future, others would only support such bonds for specific purposes while others are opposed to them on principle. Merkel, too, said that the positions were "highly differentiated." In any case, no resolution was passed at the meeting, which was only intended as a forum for discussion.

A growth package will only be decided upon at the next regular EU summit in late June. Whether euro bonds, in whatever form, are part of that will probably become clear over the next few weeks. European Council President Herman Van Rompuy has the task of collecting the proposals and deciding what will be on the agenda at the June summit.

Almost equally controversial is the proposal by Hollande and Italian Prime Minister Mario Monti that the permanent euro rescue fund, the European Stability Mechanism (ESM), should in the future be able to support banks directly (under the current rules, it will only be able to lend money to national governments). Hollande remarked in passing that he agrees with Monti on many points. The implication was clear: The adversary is Merkel.

So far, the 27 heads of state and government have only managed to agree to boost the capital of the European Investment Bank (EIB), to use the EU's structural funds in a more targeted way to help crisis-hit countries and to issue so-called project bonds for infrastructure projects. Whether those measures will be called a "growth pact" will be decided in June, Hollande said.

At the informal summit, the French president was able to give new momentum to the long-running debate on euro bonds. But it is unclear whether the euro zone is any closer to implementing the controversial bonds. Hollande himself admitted that the EU treaties would have to be changed for euro bonds -- something which seems practically impossible in the foreseeable future, given that Britain and the Czech Republic already rejected an amendment to the treaties in December. Back then, the issue was the fiscal pact, which would have required far less intervention in national budgets than euro bonds would.

The fundamental debate about euro bonds almost seems like a diversionary tactic to distract attention from the burning questions about Greece. The EU's leaders have no new answers about how to deal with the crisis-hit country.

In a joint statement, they reaffirmed that they would not abandon the country. But that is unlikely to reassure the skeptics. Ever since the attempts to form a government in Athens collapsed two weeks ago, there has been speculation on the financial markets regarding an impending Greek exit from the euro zone. There is considerable unease over a possible victory of the left-wing Syriza party, which wants to renegotiate Greece's international bailout, in new elections on June 17. European politicians have warned that they will stop financial aid to the country if the new Greek government fails to carry out the agreed reforms. The result would be a Greek default and a possible exit from the euro zone.

Hence, the messages coming from Brussels, Berlin and Paris are contradictory. On the one hand, EU leaders want to reassure the financial markets that they will prevent Greece from leaving the euro zone. On the other hand, they are threatening Greek voters and politicians with precisely that.

This dilemma will persist until the Greek election. Up until June 17, the euro zone will remain paralyzed. Diplomats in Brussels hope that once the Greek and French elections have passed, things will become clearer. After that, it will also be easier for Hollande to reach out to the German chancellor. 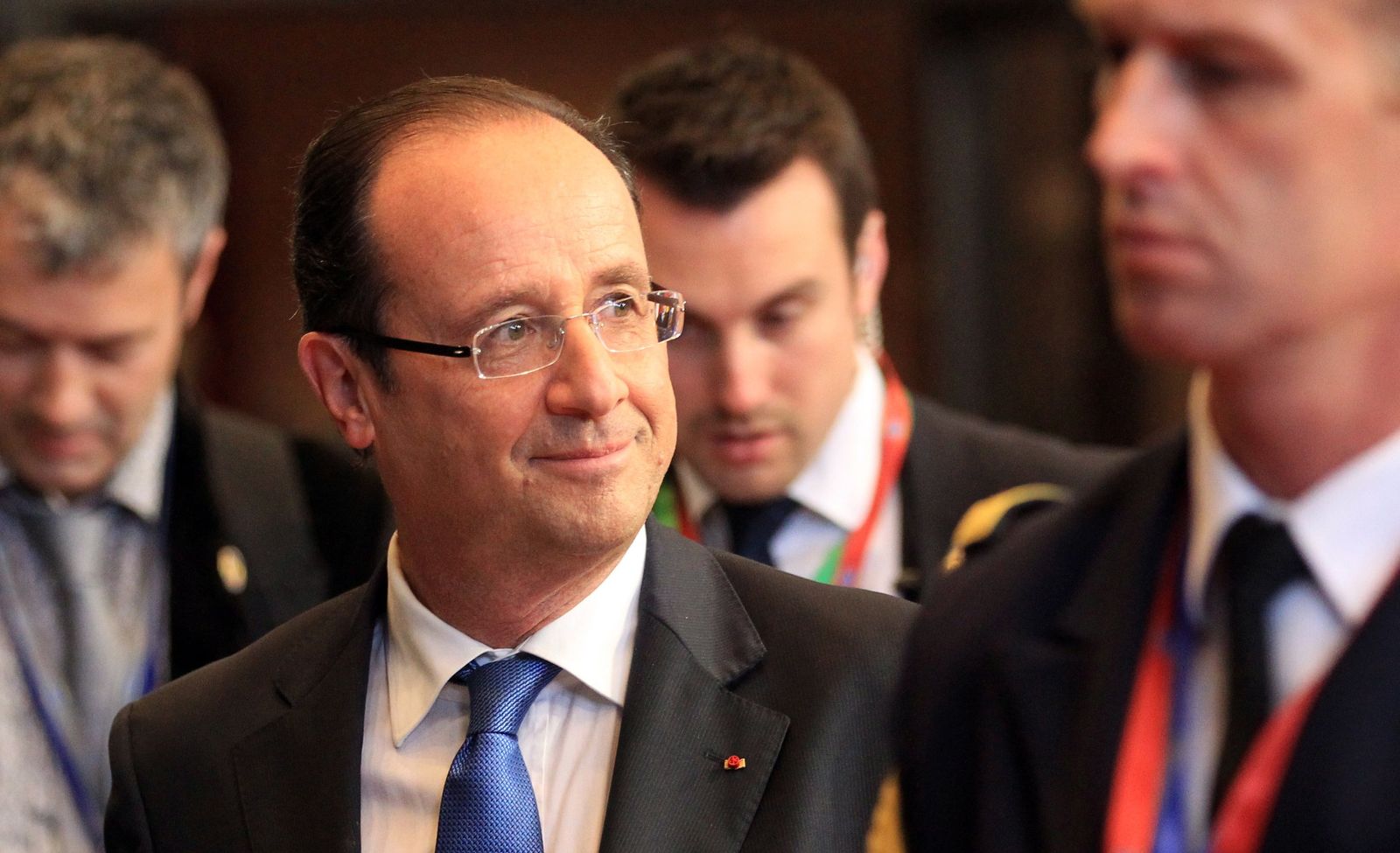 French President François Holland at the end of the informal EU summit in Brussels.