On the outside, the new Angela Merkel looks like the old one. She still wears her usual blazer -- a camel-colored one on this particular Wednesday. Her striking amber necklace has resurfaced. Her hair? Always the same. Still, something has changed since the German chancellor returned from her summer vacation. And it was apparent on Wednesday, as she stood together with Italian Prime Minister Mario Monti on the first floor of the Chancellery in Berlin.

"Italy has undertaken great efforts," the German chancellor said, praisingly. She said the country's reform agenda to combat the debt crisis had been "impressive" and that she was personally convinced it would also "bear fruit." At the end of the press conference, she murmured to reporters: "It was nice being here with you."

It is Merkels words that are sounding different these days. She no longer sounds like the cold, iron chancellor. Merkel seems to have discovered empathy.

No longer does the chancellor speak exclusively about austerity obligations, of deficit targets that need to be me or the threat of another troika report. Instead, while not having suddenly yielded to those countries in the euro zone that are struggling to right their debt-ridden ships, she is expressly acknowledging all the efforts governments are undertaking. She praises successes, offers her gratitude and also speaks of the people who are suffering under the crisis, showing sympathy for their privations. When it comes to the core issues surrounding the euro crisis, she remains firm, but her tone has grown more conciliatory.

It is as though Merkel spent some time during her summer vacation in the mountains of South Tyrol pondering her international image. And there is plenty to ponder. Hideous photo montages have become a regular feature in the Greek and, increasingly, Italian press. Some depict the chancellor wearing a Nazi uniform, others bluster of a "Fourth Reich." Even the British press has gotten involved, with the New Statesman recently caricaturing Merkel as the Terminator and declared her to be "Europe's Most Dangerous Leader." In a SPIEGEL interview published not long ago, Monti himself reported growing resentment in his country -- "against the Germans and sometimes against the chancellor herself."

'Showing a Human Side'

Merkel, of course, is partially to blame for the bad press. Her euro-crisis severity aside, she has also occassionally been unguarded. During the campaign ahead of state elections in North Rhine-Westphalia earlier this year, she remarked that Southern Europeans needed to work longer hours and take less vacation. That and similar utterances have helped cement an image abroad of a merciless Teutonic disciplinarian obsessed with austerity measures and possessed of little regard for the losses and suffering such policies would entail.

In Germany, Merkel currently enjoys higher popularity ratings than she has in a long time, and even her party has gained a few points in recent public opinion polls. But the risk is considerable that the less flattering image Merkel has abroad could eventually influence her domestic standing. Within the business community, concerns have been growing for some time that anti-German sentiment in Europe could eventually have a negative impact on their bottom lines.

Countering the trend does not come easy for Merkel, whose brand of hard-nosed leadership can seem almost dour. Indeed, SPIEGEL once describe her governing style as robotic. But for now, it appears that she has decided to fix her image by simply being nicer. "Showing a human side always plays well," said Klaus-Peter Schöppner, head of German pollster Emnid.

The chancellor's new approach first became apparent last Friday, during Greek Prime Minister Antonis Samaras' visit to Berlin. When Merkel would speak to his predecessor, Georgios Papanderou, she often sounded like a school principal addressing a poorly behaved pupil. Even though the situation in Greece hasn't improved much since then, her reception of Samaras was radically different.

"Germany is linked with Greece in friendship," Merkel stressed. She insisted the country would remain in the euro zone, evoked how valuable the common currency is for European unity, pronounced her trust in Samaras and, most importantly, she expressed her deep respect for the "major sacrifices" that Greeks were having to make. They had, she said, been forced "to endure a lot and have suffered." She repeated the statements in a Sunday television interview and again at a Monday meeting with leaders from her Christian Democratic Union (CDU) party. At a Tuesday event at the Chancellery, she addressed cuts made to Greek pensions and to workers' salaries, saying: "It is deeply distressing."

The week before, Merkel took part in a major campaign launched in Germany by a number of non-profit foundations, many of which are linked to the country's biggest companies, under the slogan, "I want Europe." The campaign is aimed at combating growing EU fatigue within the German population and in a video made for the campaign, the chancellor said: "These people, with their pledge to Europe, are speaking directly to my heart." She said every effort and initiative defending the idea that Germany's future is tied to Europe is valuable.

Merkel Distances Herself from Hardliners

Merkel's new tone comes at a difficult time for the euro, with trying weeks ahead. Many believe that a Greek bankruptcy is only a matter of time, and concurrently the German chancellor is trying to find consensus for a deeper political union within the EU. Merkel wants Germany to once again be seen as a driving force of European integration -- and not simply as Greece's most vociferous critic and the country most likely to drive the common currency over the abyss. "She is acting very diplomatically so as not to be branded a hardliner," said Emnid's Schöppner.

Whether her campaign will ultimately be successful is not entirely under her control. While her junior coalition partners from the Free Democrats have turned down the volume recently on their criticism of Greece, the CDU's sister party, the Christian Social Union, has shown no such tendency. Just recently, the party's general secretary, Alexander Dobrindt, lashed out at Greece. Merkel immediately distanced herself. Manfred Güllner, head of the Forsa Institute polling firm, said that Merkel is "consciously disassociating" herself from such anti-Greece sentiments. "By being pleasant, she will be perceived differently than the euro populist yappers." he said.

Still, Merkel knows that every sharp-edged word has the potential to ruin her efforts to improve her image and that of her country. That is something she would like to avoid, particularly now that her efforts have begun bearing fruit. During his Berlin visit, Greek Prime Minister Samaras spoke of a "beginning of new relations." The Greek media too noted the reconciliatory tone. "The ice has been broken," wrote the Athens-based Ta Nea. For its part, conservative Kathimerini observed a "crack in the Berlin Wall." 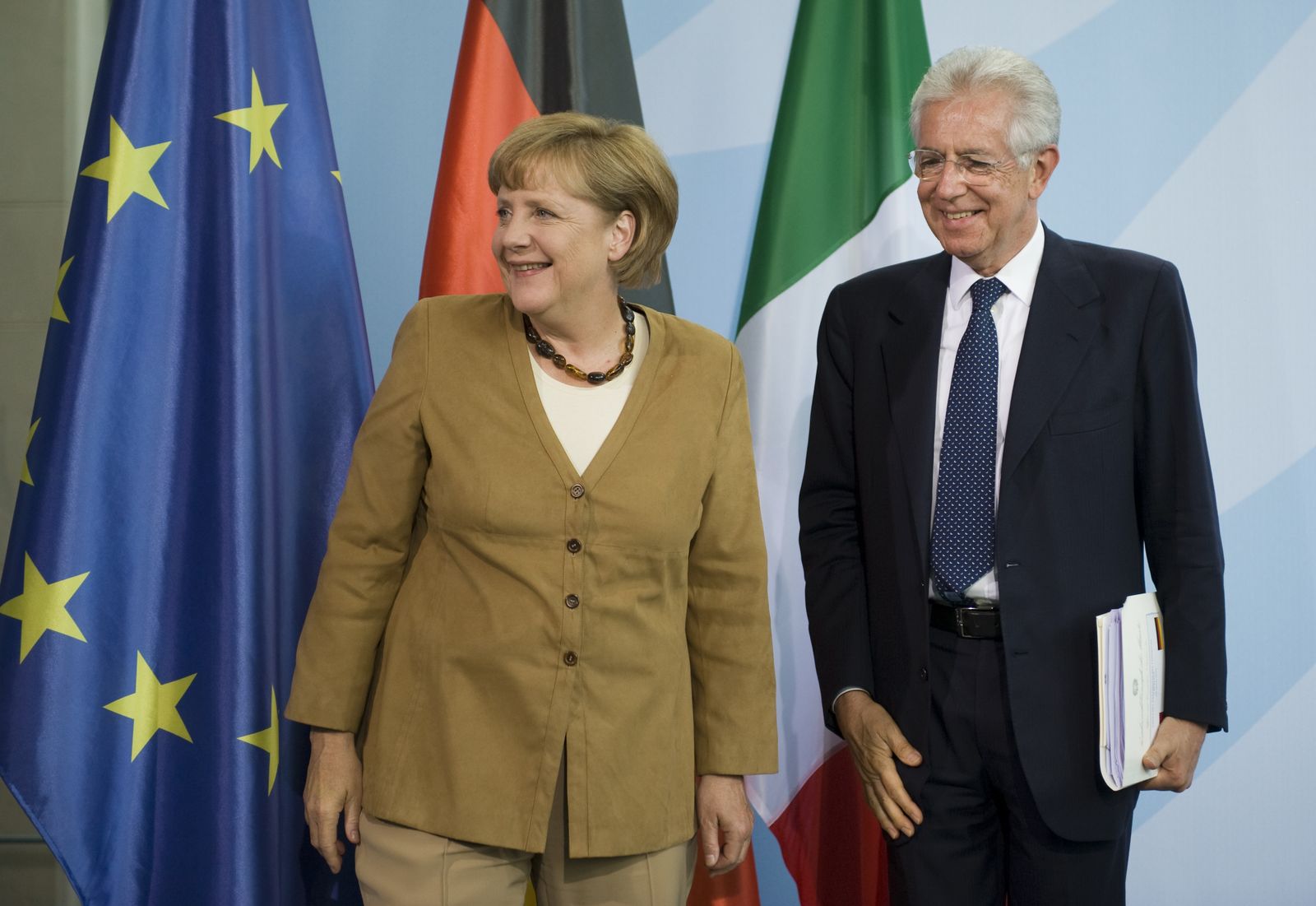 Smiling her way to a new image: Chancellor Angela Merkel at a press conference with Italian Prime Minister Mario Monti in Berlin on Tuesday