The European sovereign debt crisis has plenty of losers, but arguably one clear winner: Germany. Demand for German bonds, seen as the safest haven in the euro zone, has pushed Berlin's borrowing costs so low that some investors are effectively paying Germany for the privilege of lending it money.

Now German economists have calculated that Germany could reach its cherished goal of a balanced budget by as early as next year, as a result of its bargain borrowing costs -- provided, that is, the euro crisis doesn't escalate.

According to calculations conducted for the Financial Times Deutschland by the private research company Kiel Economics, a spin-off of the respected Kiel Institute for the World Economy (IfW), Germany will save a total of around €15 billion ($19 billion) in 2011 and 2012 as a result of low interest rates on government bonds. Berlin will save at least €10 billion in 2012 alone, the economists calculate. "We are expecting a balanced budget in 2013," the IfW's Jens Boysen-Hogrefe told the Thursday edition of the newspaper.

The economic research institute RWI also foresees a balanced budget for Germany in 2013 in its latest economic report, published Wednesday. That prediction, however, is based on the assumption that the euro crisis does not escalate, which could leave Germany with costly liabilities -- for example, in the event that Greece leaves the euro zone.

Investor demand for German government bonds, perceived as a safe haven amid the burgeoning euro crisis, has pushed yields down to record lows. At an auction on Wednesday, Berlin issued 10-year bonds with an interest rate of just 1.52 percent. When adjusted for inflation, currently at 1.9 percent, the rate means that investors will actually lose money on their investment. In effect, they are paying Germany to keep their money safe.

The figures are likely to provide critics of Germany with more ammunition. Already many economists and politicians outside the country are calling on Berlin to do more to solve the debt crisis. The perception that Germany is benefiting financially from the crisis while imposing strict austerity measures on countries in southern Europe is unlikely to win many friends for Chancellor Angela Merkel, who is already highly unpopular in countries such as Greece.

But the German government looks unwilling to bend to the external pressure. In a strongly worded statement to the German parliament on Thursday, Merkel defended her crisis-management approach and warned that Germany could be overwhelmed by growing financial liabilities caused by the crisis.

In an apparent reference to the proposed euro bonds, Merkel said that seemingly simple "collectivization ideas" are actually "unconstitutional and completely counterproductive."

"Germany is strong," Merkel said, describing the country as an "economic motor" and an "anchor for stability." Germany deploys its strength in the service of European unity and the global economy, she said, but added that the country's strength is "not unlimited." All of the proposed solutions for the crisis will be just "hollow words" if it turns out that they would overwhelm Germany's capabilities, she said.

The important thing is not to find the quickest solution, but the best one, Merkel said, and she called for gradual steps toward the "Herculean task" of building a European political union. "It is our task today to make up for what was not done (when the euro was introduced in 1999) and to end the vicious circle of ever new debt, of not sticking to the rules," she said.

Merkel received backing from an unexpected quarter on Wednesday, when US Treasury Secretary Timothy Geithner defended Germany's position on the euro crisis, saying it was "very reasonable." Speaking at an event organized by the Council on Foreign Relations, at think tank in Washington, Geithner said it would be unfair to blame Germany as the sole source of the euro zone's problems.

"Germany is saying make monetary union work," said Geithner, who in the past has been critical of European leaders' efforts to solve the crisis. He also said that the international community will be looking to Germany and other "major players" at next week's G-20 summit in Mexico to clarify proposals on a European banking union and other steps to fight the crisis.

Meanwhile, there was more bad news for the euro zone's battered southern members on Thursday when yields on Spain's 10-year bonds hit 7 percent, the highest mark since the euro was introduced. Greece, Ireland and Portugal were all forced to ask for a bailout when their borrowing costs hit that level, which is considered unsustainable.

Spain's banking bailout, announced over the weekend, appears to have done little to reassure markets. On Wednesday, the credit rating agency Moody's cut Spain's rating by three notches to Baa3, just one level above junk status. At another bond auction on Thursday, Italy's three-year borrowing costs rose to 5.3 percent, the highest level since December, increasing fears that Italy too may need financial aid.

Investors are clearly getting increasingly nervous about the euro zone's future ahead of Sunday's general election in Greece, which is being seen as a referendum on the country's membership in the euro zone. Many observers are concerned that Greece will have to return to the drachma if the left-wing anti-austerity Syriza party wins the election, or if the country is unable to form a viable government.

Breaking into a Run

There are recent reports that Greeks are withdrawing more cash from their accounts, suggesting that the country's so-called "bank jog" is gaining speed. Senior bankers told the news agency Reuters on Wednesday that daily deposit outflows by private customers and companies have reached between €500 million and €800 billion over the last few days, with the pace increasing as the election approaches. The figure includes cash withdrawals, wire transfers, and investments in money market funds and German and American bonds.

The European Commission is, however, standing firm in its refusal to loosen the conditions on Greece's bailout. A spokesman for Olli Rehn, the EU commissioner for economic and monetary affairs, told the center-left daily newspaper Süddeutsche Zeitung on Wednesday that the Commission was sticking to the agreed terms of the bailout.

Although that appeared to contradict an earlier report that the EU was planning to discuss softening the terms of Greece's bailout, sources in Brussels told the Süddeutsche that the Commission was taking a tough stance for tactical reasons. Representatives of the so-called troika -- which consists of the European Commission, the European Central Bank and the International Monetary Fund -- are getting ready to travel to Greece to examine the situation as soon as a new government has been formed, the Süddeutsche reported in its Thursday edition. 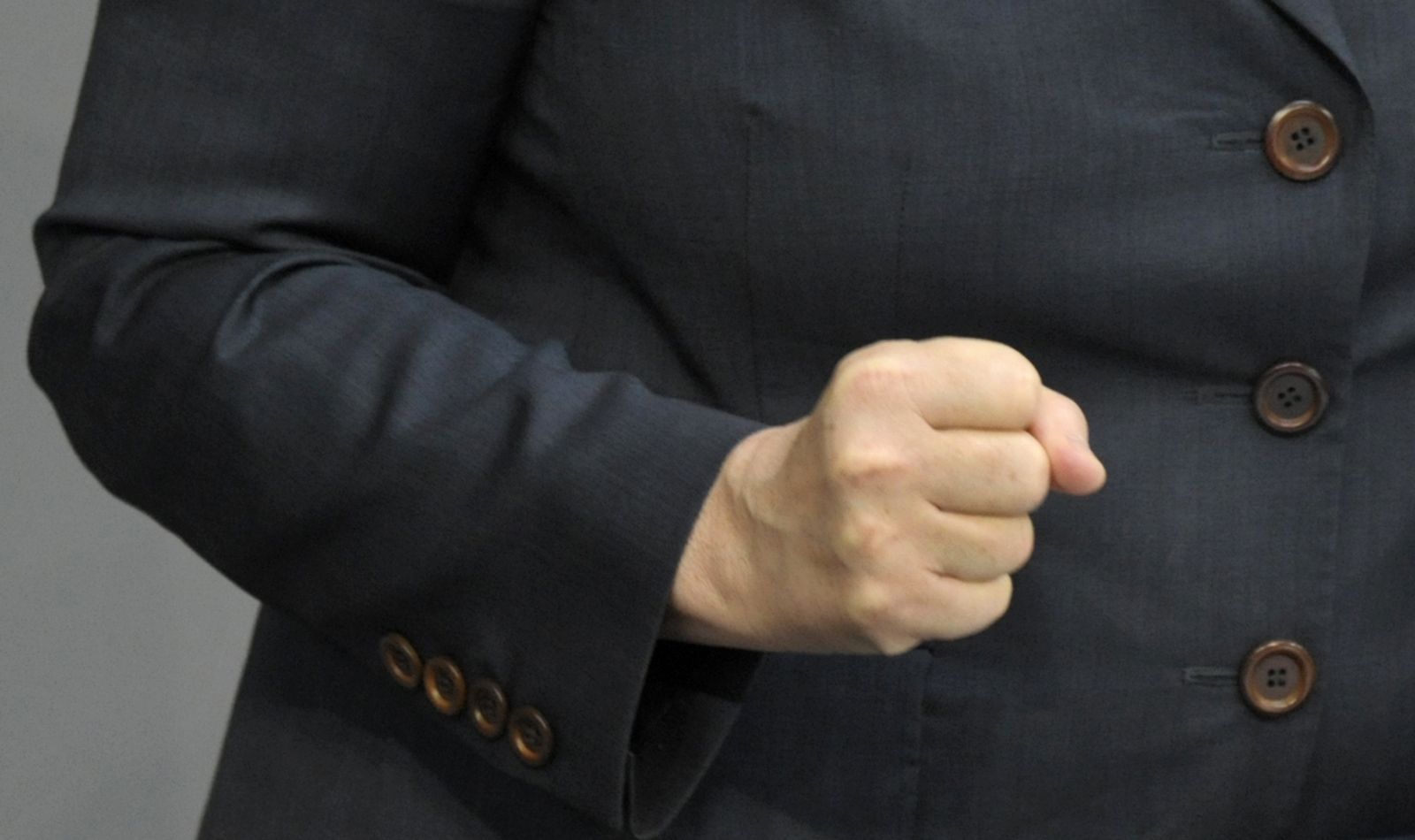 Chancellor Merkel clenchs her fist as she delivers a speech on the euro crisis to the German parliament on Thursday.