Georgios Provopoulos, the governor of the central bank of Greece, is a man of statistics, and they speak a clear language. "In September and October, savings and time deposits fell by a further 13 to 14 billion euros. In the first 10 days of November the decline continued on a large scale," he recently told the economic affairs committee of the Greek parliament.

With disarming honesty, the central banker explained to the lawmakers why the Greek economy isn't managing to recover from a recession that has gone on for three years now: "Our banking system lacks the scope to finance growth."

He means that the outflow of funds from Greek bank accounts has been accelerating rapidly. At the start of 2010, savings and time deposits held by private households in Greece totalled €237.7 billion -- by the end of 2011, they had fallen by €49 billion. Since then, the decline has been gaining momentum. Savings fell by a further €5.4 billion in September and by an estimated €8.5 billion in October -- the biggest monthly outflow of funds since the start of the debt crisis in late 2009.

The raid on bank accounts stems from deep uncertainty in Greek households which culminated in early November during the political turmoil that followed the announcement by then-Prime Minister Georgios Papandreou of a referendum on the second Greek bailout package.

Papandreou withdrew the plan and stepped down following an outcry among other European leaders against the referendum, and a new government was formed on Nov. 11 under former central banker Loukas Papademos. That appears to have slowed the drop in bank savings, at least for the time being.

Nevertheless, the Greeks today only have €170 billion in savings -- almost 30 percent less than at the start of 2010.

The hemorrhaging of bank savings has had a disastrous impact on the economy. Many companies have had to tap into their reserves during the recession because banks have become more reluctant to lend. More Greek families are now living off their savings because they have lost their jobs or have had their salaries or pensions cut.

In August, unemployment reached 18.4 percent. Many Greeks now hoard their savings in their homes because they are worried the banking system may collapse.

Those who can are trying to shift their funds abroad. The Greek central bank estimates that around a fifth of the deposits withdrawn have been moved out of the country. "There is a lot of uncertainty," says Panagiotis Nikoloudis, president of the National Agency for Combating Money Laundering.

The banks are exploiting that insecurity. "They are asking their customers whether they wouldn't rather invest their money in Liechtenstein, Switzerland or Germany."

Nikoloudis has detected a further trend. At first, it was just a few people trying to withdraw large sums of money. Now it's large numbers of people moving small sums. Ypatia K., a 55-year-old bank worker from Athens, can confirm that. "The customers, especially small savers, have recently been withdrawing sums of €3,000, €4,000 or €5,000. That was panic," she said.

Marina S., a 74-year-old widow from Athens, said she has to be extra careful with money these days. "I have no choice but to withdraw money from my savings," she said.

The shrinking Greek bank deposits compare with bank loans totalling €253 million. Analysts say the share of bad loans could rise to 20 percent next year, or €50 billion, as a result of the recession. This in turn will worsen the already pressing liquidity problems faced by Greek banks.

Nikos B., a doctor in the Greek military, has had enough of the never-ending crisis his country is going through. While the 31-year-old has a secure job, repeated salary cuts have made it increasingly hard for him to make ends meet.

He needs most of his money to make loan repayments for a small car. "How can I clear my account? There's hardly anything in it," he says. He started learning German two months ago and wants to leave Greece. "As soon as possible!"

Nikos pauses and looks down. He quietly utters words that must be painful for a proud Greek. "It would be best to change nationality." 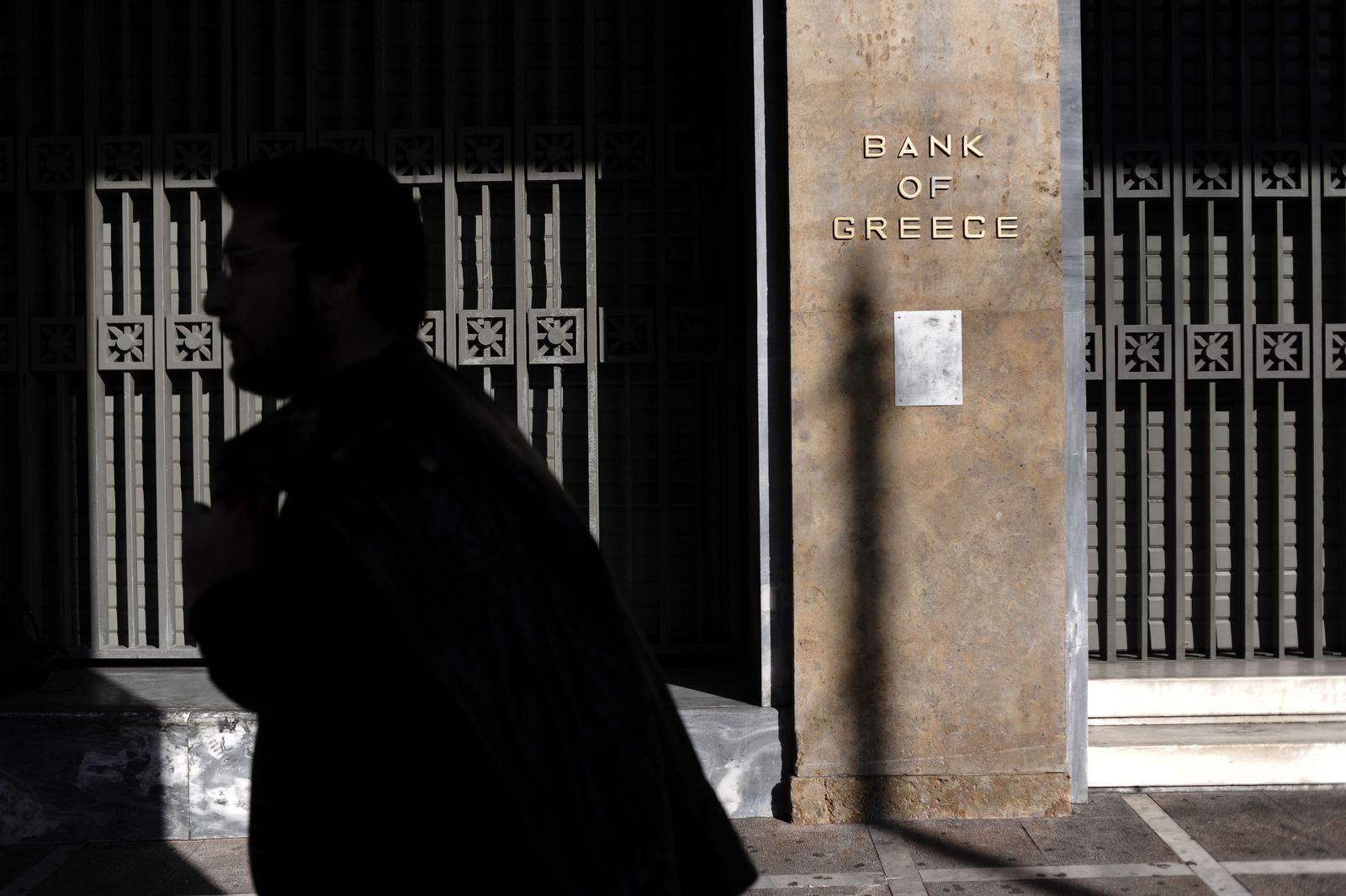 A branch of the Greek central bank. Bank deposits are falling rapidly.