Let's hope Europe is prepared for a Greek bankruptcy. That was the message delivered by former German Finance Minister Peer Steinbrück during a Tuesday evening appearance at the Woman's National Democratic Club in Washington. Were he still in charge of German finances, he says, he would have ordered his experts "half a year ago" to come up with a plan B. "I would have liked to have been prepared for a Greek insolvency," he said.

Steinbrück's comments came immediately following an announcement by the Euro Group head, Luxembourg Prime Minister Jean-Claude Juncker, that he had cancelled a Wednesday meeting of euro-zone finance ministers because Greece had yet to meet conditions demanded by Brussels. Steinbrück called the cancellation an "escalation."

The comments by Steinbrück, a senior member of Germany's opposition Social Democrats and a possible candidate for chancellor in next year's general elections, are just the latest sign that leading politicians in Europe are beginning to think seriously about a Greek insolvency. On Monday evening, current German Finance Minister Wolfgang Schäuble indicated that Europe was much better prepared for such an eventuality than it was two years ago.

Angel Gurria, the head of the Organization for Economic Cooperation and Development (OECD), agreed with Schäuble on Tuesday, though he warned that a Greek bankruptcy could be messy. "Although we are better off today than we were two years ago for that kind of a scenario, we really don't know which unexpected consequences may happen," he said, according to the Associated Press.

Euro-zone finance ministers had hoped to grant approval to a badly needed €130 billion ($171 billion) bailout package for Greece on Wednesday. Greece is facing a €14.5 billion bond redemption in March -- a payout it will not be able to meet without external help. Rapid approval of the bailout package is vital.

But Juncker opted to replace the planned face-to-face meeting with a telephone conference call after Greece failed to meet several criteria for the release of the funds. Despite the Greek parliament having passed a €3.3 billion austerity package on Sunday evening, some concrete elements of the plan remain missing. Specifically, Europe wants details regarding how Athens plans to make an additional €325 million in savings demanded by the euro zone. Euro-zone finance ministers will now consult at a regularly planned meeting on Monday.

Furthermore, Europe has demanded signed statements from the leaders of Greek political parties that they will implement the savings measures beyond the next parliamentary elections, currently scheduled for April. "I did not yet receive the required political assurances from the leaders of the Greek coalition parties on the implementation of the program," Juncker said in a statement.

Specifically, Antonis Samaras has been slow to provide his assurance. The leader of the conservative New Democracy party, Samaras has been vocal in his resistance to the austerity measures, though his party ultimately backed them in parliament on Sunday night. Still, Samaras indicated that, were he elected prime minister this spring, he might try to revisit the deal now being negotiated with the European Union. Samaras' party is currently leading in public opinion polls. According to media reports, he is planning on delivering his signed pledge on Wednesday.

Conservatives in Germany are becoming frustrated with Samaras' stalling tactics. Schäuble, who is a member of Chancellor Angela Merkel's Christian Democrats (CDU), confirmed on Wednesday that the lack of Samaras' political pledge is a significant reason for the cancellation of the planned Euro Group meeting. He told radio station Südwestrundfunk that New Democracy's insufficient commitment to austerity remained a hurdle.

Peter Altmaier, one of Merkel's most important advisers, also said that a pledge from the New Democracy leader regarding austerity was an "extremely decisive prerequisite" for the release of further aid funds.

Still, Samaras' reluctance is perhaps understandable, and it reflects growing frustration in Greece as austerity eats into the country's economy. Economic data released on Tuesday indicated that Greece's gross domestic product had shrunk by 7 percent in the fourth quarter of 2011 relative to the same period in the previous year. The country's economy has now receded by 16 percent against its peak and, with more austerity on the way, there is no end in sight for the slide.

Economic leaders in Germany are also taking note. Franz Fehrenbach, CEO of the engineering and electronics giant Bosch, told the tabloid Bild that he thinks Greece should leave the euro zone. The Greek system, he said, "is dilapidated and is an unacceptable burden for a union based on solidarity." 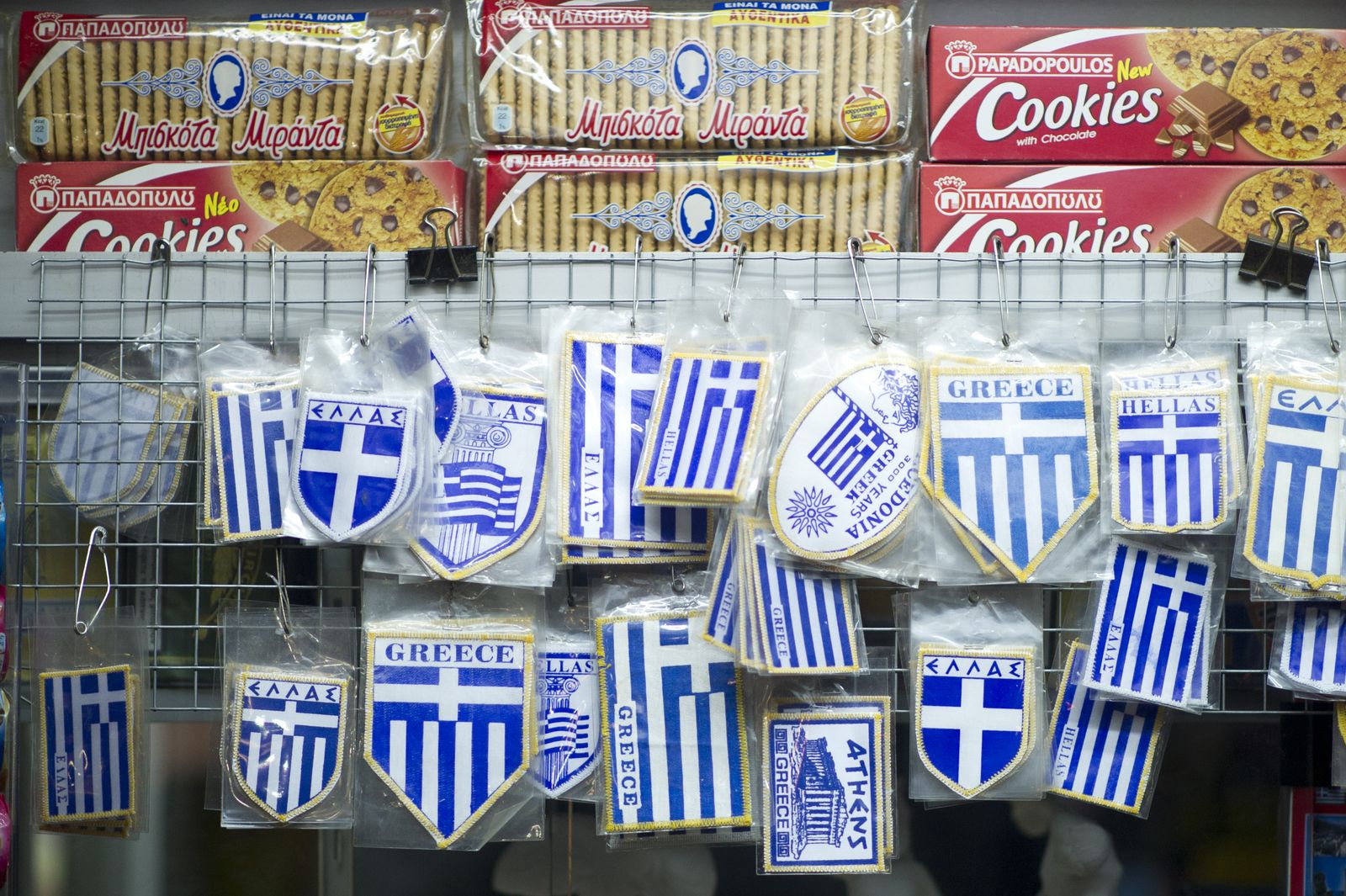 Greek flags for sale in a kiosk in Athens.