In recent years characterized by mammoth euro-zone bailouts and interminable European Union squabbling over the future of the bloc, German Finance Minister Wolfgang Schäuble has become a master at downplaying differences. On Wednesday morning, after talks aimed at finally overcoming an impasse on efforts to artificially resuscitate Greece collapsed, he once again put his talent on display.

"Because the questions are so complicated, we were unable to find closure," Schäuble said after a 12-hour negotiation marathon. He added that a number of options were discussed.

What he didn't say is that the core of the debate is quite simple -- and highlights the serious, and potentially dangerous, divide which has opened up between the euro-zone member states and the International Monetary Fund. Both sides are eager to see Greece's overall debt load shrink to a level that Athens can shoulder on its own. But whereas the IMF believes that the only sure way to get there is by ushering in another partial Greek default, euro-zone leaders, Germany first among them, would like to avoid such a scenario at all costs.

With Greece having recently been granted two extra years to reach its budget deficit reduction targets, the debate is now focusing on overall debt reduction. The IMF insists that Athens reduce its debt load from a current level of around 170 percent of gross domestic product (GDP) to a ratio of 120 percent by 2020. Based on measures in place today and current growth forecasts for the Greek economy -- combined with the two-year budget deficit delay -- that target is likely unreachable. As such, the IMF is insisting that Germany and other creditors forgive a portion of Greece's debt.

Such a move, however, is anathema to Berlin. Indeed, Chancellor Angela Merkel's Christian Democratic Union (CDU) party on Wednesday once again emphasized its opposition to such a debt haircut. Norbert Barthle, a senior CDU parliamentarian and the party's budgetary spokesman in the Bundestag, told German radio that he "very much hopes" that Germany can ward off a debt haircut. A partial default, he said, "would be a fatal signal to Portugal, Ireland and perhaps even Spain." Such countries, he added, would immediately wonder why they should bother adopting difficult austerity and reform measures in the future.

'Close to a Result'

According to a paper circulated at the euro-zone finance minister talks in Brussels on Tuesday night -- and which Reuters has seen -- measures currently in place would result in a reduction of Greek debt to 144 percent of GDP by 2020 and 133 percent by 2022.

"To bring the debt down further, one needs to take recourse to measures that would entail capital losses or budgetary implications for euro area member states," the document states, according to Reuters. Several possible measures have been discussed, including slashing the interest that Greece must pay on the emergency loans it has thus far received as well as creditor nations handing the profits they have earned on those loans back to Greece.

Euro Group head Jean Claude Juncker was at pains to project optimism after the collapse of the talks. "We are very close to a result," he told reporters on Wednesday morning. "We see no major stumbling block." IMF chief Christine Lagarde was more circumspect. "We have narrowed the positions," is all she would say.

Even if the IMF imposed debt-load target of 120 percent of GDP by 2020 is largely arbitrary, a break between the euro-zone and the IMF would likely be seriously damaging. IMF involvement in bailouts for Greece and other struggling euro-zone countries have lent the effort vital credibility and were Lagarde's organization to back out, it could seriously alarm investors as well as make the bailouts a lot more expensive for Europe.

Greece's euro-zone creditors, however, are skeptical of the IMF's debt haircut model. In contrast to the partial Greek default last spring, which primarily affected private investors, any new debt haircut would hit public money this time -- and would mark the first time that countries such as Germany actually lost money in the crisis. With Merkel facing a re-election battle next year, the appetite for such a move in Berlin is extremely limited.

The collapse of the talks, meanwhile, has left Athens in limbo yet again. The country badly needs the next payout of bailout money, but without an agreement on Greece's debt structure, the tranche cannot be disbursed. "Greece has done what it had to and what it had committed to doing," Greek Prime Minister Antonis Samaras said in a statement on Wednesday morning. "Our partners, along with the IMF, also must do what they have undertaken."

Despite his frustration, however, he will have to wait. Talks between the EU finance ministers and the IMF are first expected to resume on Monday. 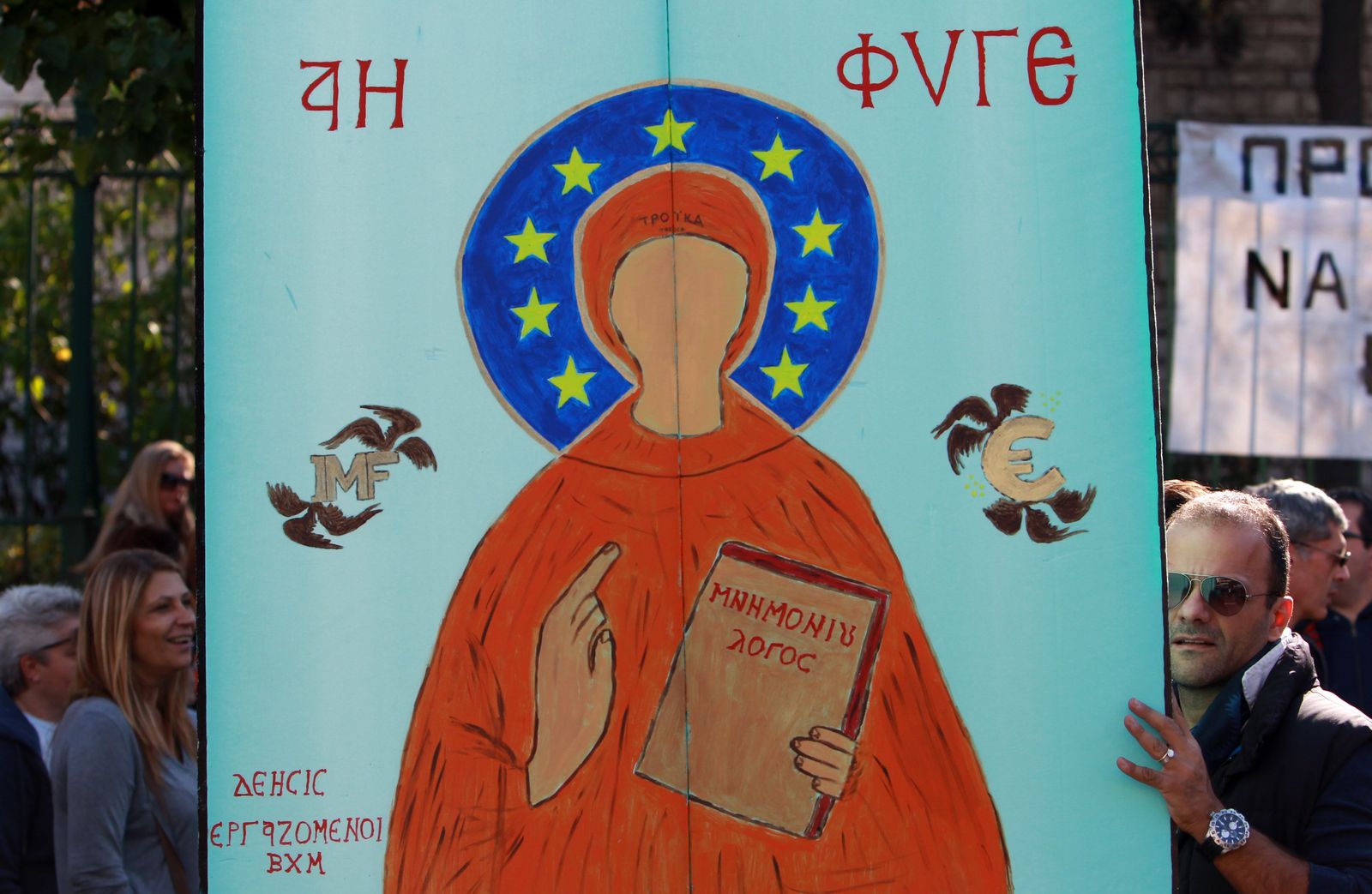 A sign held by a protester earlier this month in Athens reading "IMF Get Out."