It's no accident that "pathos" is a Greek word. Greek Prime Minister Antonis Samaras, at least, is a politician who is fond of sprinkling his speeches with the kind of emotional appeal that Aristotle long ago identified as an effective stylistic device.

"The era of bailout packages is ending," Samaras promised in September during an appearance in Thessaloniki. "Greece is now welcoming the new Greece."

Samaras knew the line would guarantee him applause from his audience, but the promise also came a bit prematurely. Following the announcement, Greece got a small taste of what it might mean were Greece were released from the oversight of the troika, comprised of the European Commission, the European Central Bank (ECB) and the International Monetary Fund. The more often Samaras spoke of a "clean solution," the more yields rose on long-term Greek government bonds. At the beginning of September, the rates had been 5.8 percent, but they soon climbed to almost 9 percent.

It was the financial markets' way of hinting that it is still too early to grant Greece full fiscal independence.

One high-ranking EU official compared the situation to a patient who has survived intensive care but wants to leave the hospital early. A relapse is certain and the subsequent care will be much more involved than if the patient had stayed in the hospital long enough for full recovery. Greece's second bailout package officially ends in a month's time, but it is already certain that the country will require additional funding from its EU partners.

Last Wednesday in Paris, there was a minor uproar when troika officials made it known that they felt Greece hadn't fulfilled conditions for the payout of the final tranche from the second bailout package. Athens' international creditors determined the country will fall around €2 billion ($2.5 billion) short of reaching its commitment of not exceeding a budget deficit of 3 percent of gross domestic product. The Greeks, for their part, accused the troika of being overly critical, arguing that in the past, the situation had developed more positively than predicted by pessimists.

Still, in contrast to Ireland or Portugal, both of which fulfilled bailout conditions with flying colors, the Greeks have always lagged behind on major reforms intended to make the country competitive again. And with presidential elections approaching, the impetus for reform has fallen even further in recent months, sources inside the European Commission claim.

A Wave of Good News

There has, of course, been plenty of positive news coming out of Greece recently. The economy is growing for the first time since 2007 and the unemployment rate is falling, even if one-quarter of all Greeks are still jobless. The country is also estimating it will host 23 million tourists this year -- the highest number ever.

Jorgo Chatzimarkakis, a former member of the European Parliament with Germany's business-friendly Free Democratic Party, says he moved to Greece, where his family is originally from, a few weeks ago. It took just three hours for him to register his place of residence and also to get signed up with the national healthcare system. "Everything was done electronically," the astounded politician says. Chatzimarkakis recently took a position as a special envoy for the Greek Foreign Ministry.

But the inefficiency often associated with Greece remains a fact of life in many areas, despite massive European development aid. The country still lacks important institutions, including a reliable national land registry office where the size of properties and their owners can be registered in a legally binding way.

Ongoing uncertainty about property ownership is considered to be one of the greatest hindrances to development in Greece. In response, the EU dispatched experts from the Netherlands to help Greece establish a functioning system. Earlier this year, the project was put out to a public tender, but the Greeks later simply cancelled it. The financing of the land registry offices was also suddenly questioned, even though they could actually help generate revenues for the country.

"We've lost over a year once again," says one fatigued EU official in Brussels. Although the government had agreed it would make progress on the land registry offices, the official speculates that the plan likely fell afoul of one of the local oligarchs that pulls the strings in the background. The vaguer the better for black market dealings.

In June, Charis Theocharis also fell victim to the interests of the super rich, who spent decades amassing billions of euros in assets without that wealth getting touched by the tax office. The public revenues general secretary had been assigned to revolutionize tax collection on behalf of the Finance Ministry. His job was to not only impose taxes on small and medium-sized businesses, but also on the country's well-connected elite. The post of a high-ranking tax collector in the Greek government had been created under pressure from international lenders. Theocharis had been given a five-year contract running until 2018, and not even the prime minister had the right to fire him.

The IMF and the European Commission were convinced they had found the right path to a truly independent tax administration. But the pressure placed on Theocharis proved so great that he ultimately resigned, "for personal reasons."

To help Greece fight corruption, Finland is also providing assistance by training 700 employees and helped to create plans for 30 related projects. But as in so many reform areas in Greece, the effort has failed to bear much fruit. So far, there has only been one major seizure and one arrest, according to the activity report from an EU task force currently advising Greece.

Changes in Greece come slowly and often only succeed as a result of firm international pressure. In 2013, the OECD club of industrialized nations reviewed four areas of the Greek economy and found 555 problematic regulations. For example, hotels, marinas and wellness-related tourist attractions all had to submit their prices to the authorities for approval. In some cases, they were also required to maintain the approved prices for an entire year. Recently, OECD economics experts determined with satisfaction that the laws had been annulled.

But developments have been less favorable in other areas where there are obstacles to competition. In the rest of Europe, fresh milk can be sold in supermarkets for 10 or 11 days, but Greece imposes a limit of five days. The OECD calculates that this costs Greek consumers €33 million a year. After the Greek milk regulators' original reform proposal triggered bitter protests, they finally agreed to allow milk to remain on store shelves for just seven days. But the reforms did contain some other benefits, as the OECD experts noted approvingly. Greek consumers now have access to fat-reduced rice puddings and yogurts, which wasn't the case before.

Progress is slow and tedious, and German Finance Minister Wolfgang Schäuble believes it has to be safeguarded with a third bailout package for Greece. At the end of last week, a group of finance ministry deputies from the euro-zone countries met in Brussels to discuss a so-called precautionary credit line for Greece that would be provided by the Euro Stability Mechanism, the common currency's permanent backstop fund. There are two types of precautionary credit lines that could be given to Greece, and Athens is expected to be prescribed the one with stricter conditions and tougher controls.

There is already broad agreement on the scope of the aid. Greece is expected to be granted around €10 billion, and the ESM will not be required to raise any additional funds for it. Some €10.8 billion is still left in the current aid package for Greece. That funding had been earmarked for shoring up the capital resources of Greek banks, but so far it hasn't been used.

Now this money is expected to be redirected so that it can be used to provide financing for the Greek national budget. But unanimous approval from the ESM's board of governors is required before that action can be taken. In a half dozen member states, including Germany, national parliaments also have a say in the decision.

In order for the precautionary credit line to go into effect at the start of next year, euro-zone finance ministers will have to make a final decision by Dec. 8 at the latest. It's still questionable right now whether they can succeed. The precondition for that to happen is that Greece must fulfill all the conditions set in the second bailout program by the end of the year.

An alternative would be to extend the duration of the second bailout program. In addition to the financing for the bank rescue, which has been earmarked for a specific purpose, there is still €1.8 billion left in the fund. Assuming the country moves forward with all of its pledged reforms, that would be enough money to cover Greece well into the next year. In ESM jargon, the trick is called a "technical extension". It's a measure that would also require approval from the board of governors.

Some €16 billion is also available until March 2016 as part of an IMF aid program, but Greece would prefer to forego the monetary fund and its controls if it can. At the end of last week, however, representatives of Germany, Finland and the Netherlands made clear to their negotiating partners from Athens that nothing would happen next year without the IMF.

Chatzimarkakis, the special envoy to Greek Foreign Minister Evangelos Venizelos, is currently calling on the Europeans to also bring populists with the leftist Syriza party to the negotiating table. The party is leading in all election polls with its fundamental opposition to the troika.

"There shouldn't be any new money without the consent of the entire political class," he says. 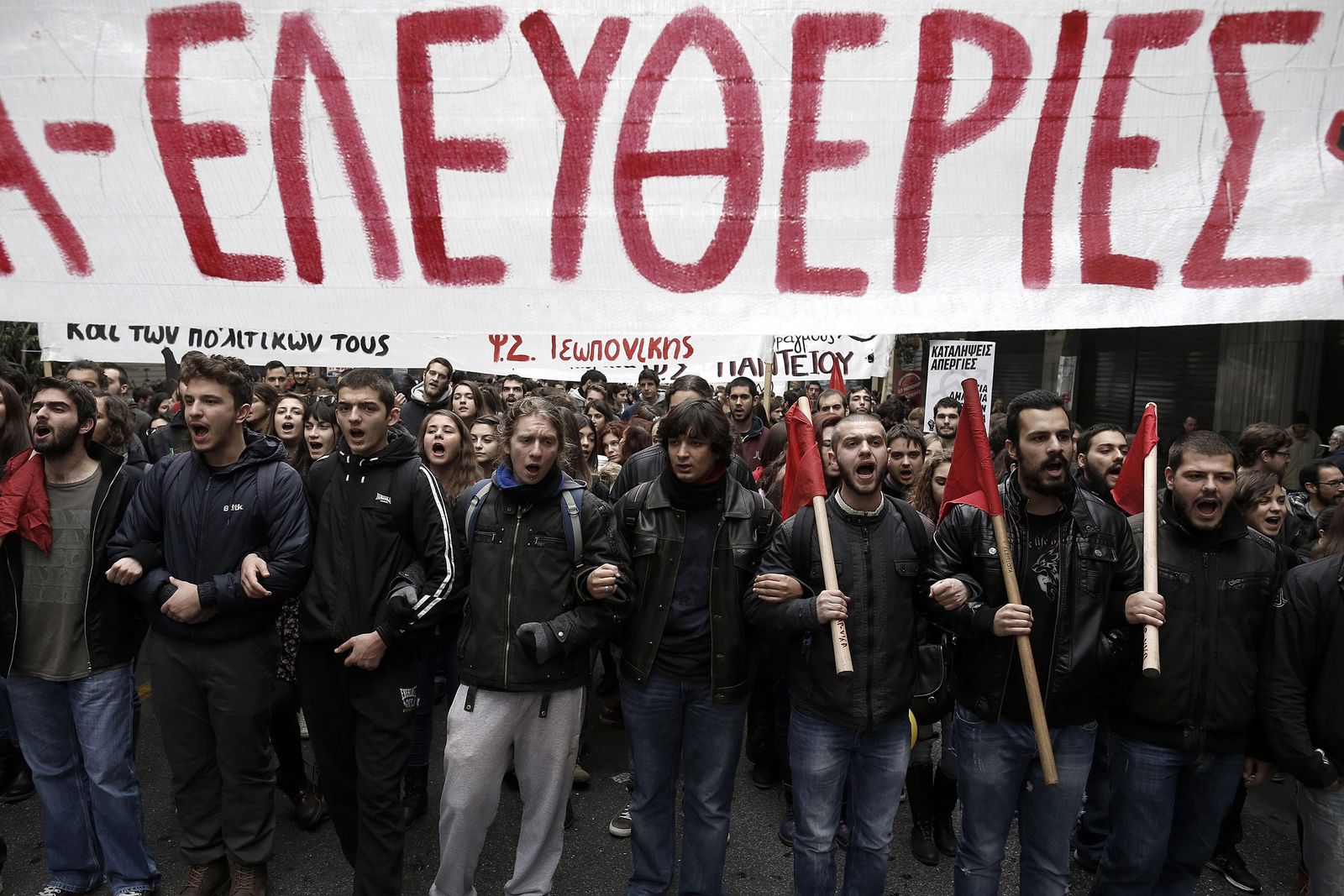 Protesters march against austerity measures in Athens on Thursday.