The Twelve Days of Christmas have finally come to an end, but in many European countries the festival of the Epiphany on Jan. 6 offers yet another chance for celebrations amid the bleak midwinter.

A national holiday in many countries, Epiphany marks the arrival of the Three Wise Men in Bethlehem bearing gifts for the baby Jesus. Yet, the traditions for celebrating the end of the Christmas holidays vary greatly from country to country.

In Spain the eve of Epiphany is marked with processions featuring the Three Wise Men and other colorful characters. On Tuesday, thousands of people filled the center of the Spanish capital Madrid to watch the annual parade, which included a giant mechanical elephant. Participants threw gifts of sweets into the crowd and many children had brought along plastic bags to increase their chances of getting some loot. In Barcelona the Magi arrived by boat and were greeted by the city's mayor, while in the Basque resort of San Sebastian, the kings arrived on camels. 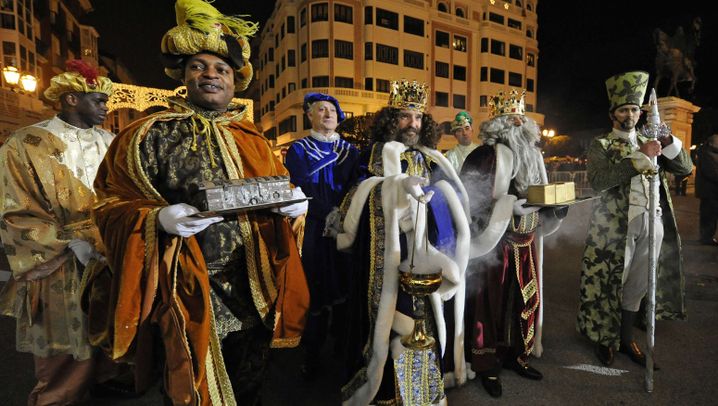 Jan. 6 is traditionally the day that Spanish children get their Christmas presents. Shoes are placed outside their bedrooms over night, in the hope that the Three Kings will be generous with gifts of sweets and small toys. On Epiphany people also eat a sweet, donut shaped bread with candied fruit that contains a small toy or coin.

Italian children, or at least the ones who have been good, are given gifts not by Santa but by a witch. La Befana flies down chimneys or through keyholes to leave presents after deciding who has been naughty and who has been nice. Children leave out stockings hoping to wake up to discover candy and small toys.

There are also festivals featuring La Befana and the small medieval town of Urbania has become the destination for a kind of children's pilgrimage in the post-Christmas period. Thousands of kids flock there to sit on the lap of a woman dressed up as an ugly old witch, while over 100 other women dressed as witches gather in the main square, performing for the visitors.

In Greece, Epiphany allows for a cleansing of the goblins, or Kallikantzaroi, that pop up between Christmas and Jan. 6 to wreak havoc. Legend has it that the mythical goblin-like spirits live in the bowels of the earth, but creep out during the Twelve Days of Christmas to get up to all kinds of mischief. To ward off the unwanted intruders, Greek households hang up a black-handled knife or the lower jaw of a pig or hang up a tangled strand of flax.

The only cure for this mayhem comes on the eve of Epiphany when the village priests bless the waters that people sprinkle throughout the house. This is usually enough to chase away the evil spirits for another year.

Greece also marks the Jan. 6 date with feats of great valor. Men dive into the sea or rivers to retrieve a cross. Bulgaria, has a similar activity. An Orthodox priest throws the cross into the freezing waters and the swimmers dive in, hoping to be the first to retrieve it. The lucky man who grabs the cross is said to be blessed with health and good luck.