If you're looking for a hint on where the key to solving the Brexit problem lies, you could do worse than looking at Donald Tusk's travel plans this week. Today, the president of the European Council, the powerful European Union body representing the leaders of the 28 member states, will be visiting Paris and Berlin, where he will be promoting his proposal to offer the British the longest possible extension of Article 50 and the date the country will withdraw from the EU.

Whether the United Kingdom must leave the EU on March 29 as previously planned, or whether the British will be given a final grace period if the impasse in the British parliament continues, will be determined in the French and German capitals, and at Thursday's EU summit in Brussels.

In principle, the EU is prepared to comply with the British wish to postpone the Brexit date -- a possibility expressly provided for in Article 50 of the EU Treaty. But that's where the common ground ends. As unanimous as the EU member states have been in the Brexit negotiations so far, they have not yet found agreement on the details of the extension of Article 50.

Paris, as has been standard throughout the Brexit talks, is holding firm. French President Emmanuel Macron first wants to hear from the British why the EU should agree to extend the deadline. Michel Barnier, the EU's chief Brexit negotiator, echoed the sentiment in European Parliament last Wednesday. "Why would we extend these discussions?" he curtly asked.

Berlin, though, has taken a different approach. Like Tusk, the German government wants to give the British more breathing room if necessary and could even imagine Britain remaining in the EU until the end of 2020. Some consider that date to be suitable because it marks the end of the EU's current budget period.

That would also provide enough time for new elections or a second referendum in Britain. Tusk, in particular, has always expressed the hope that the British might at some point reconsider Brexit.

Thus far, though, a European majority has yet to develop behind that scenario. Like Macron, many European parliamentarians and EU member-state governments aren't interested in dragging out the process for almost another two years. They note that a series of important decisions are due to be taken in the EU starting this summer, including who will lead the European Commission and the European Council, and they aren't interested in the UK having a voice in those decisions.

More than anything, though, if Article 50 were to be extended by more than three months, Britain would have to participate in European Parliament elections at the end of May -- an absurd notion for a country that wants to leave the EU. But lawyers at the European Commission and the European Parliament all agree that the EU Treaty does not allow for any other scenario. The only way to prevent it would be a shorter extension to the British withdrawal deadline.

The possible dates currently under discussion for that extension are either May 22, the day before the four-day elections start, or June 30, shortly before the new parliament is set to convene. That's also the date the British government is aiming for if a delay becomes necessary.

But that solution is also problematic. After all, no one believes that the situation in London will change significantly within such a short time period. If May had a good chance of securing a majority for her withdrawal agreement, then a short technical extension might help to enact the necessary implementing legislation. But with each defeat that May suffers in the House of Commons, this scenario becomes less likely.

"A short extension is pointless," said one European Council source. "Then the British circus will just continue to go on." At the moment, diplomats in Europe are playing things by ear. So, it's quite possible that a typical EU solution will ultimately emerge: Namely that EU leaders will grant the UK an extension and only then decide what to do with it. 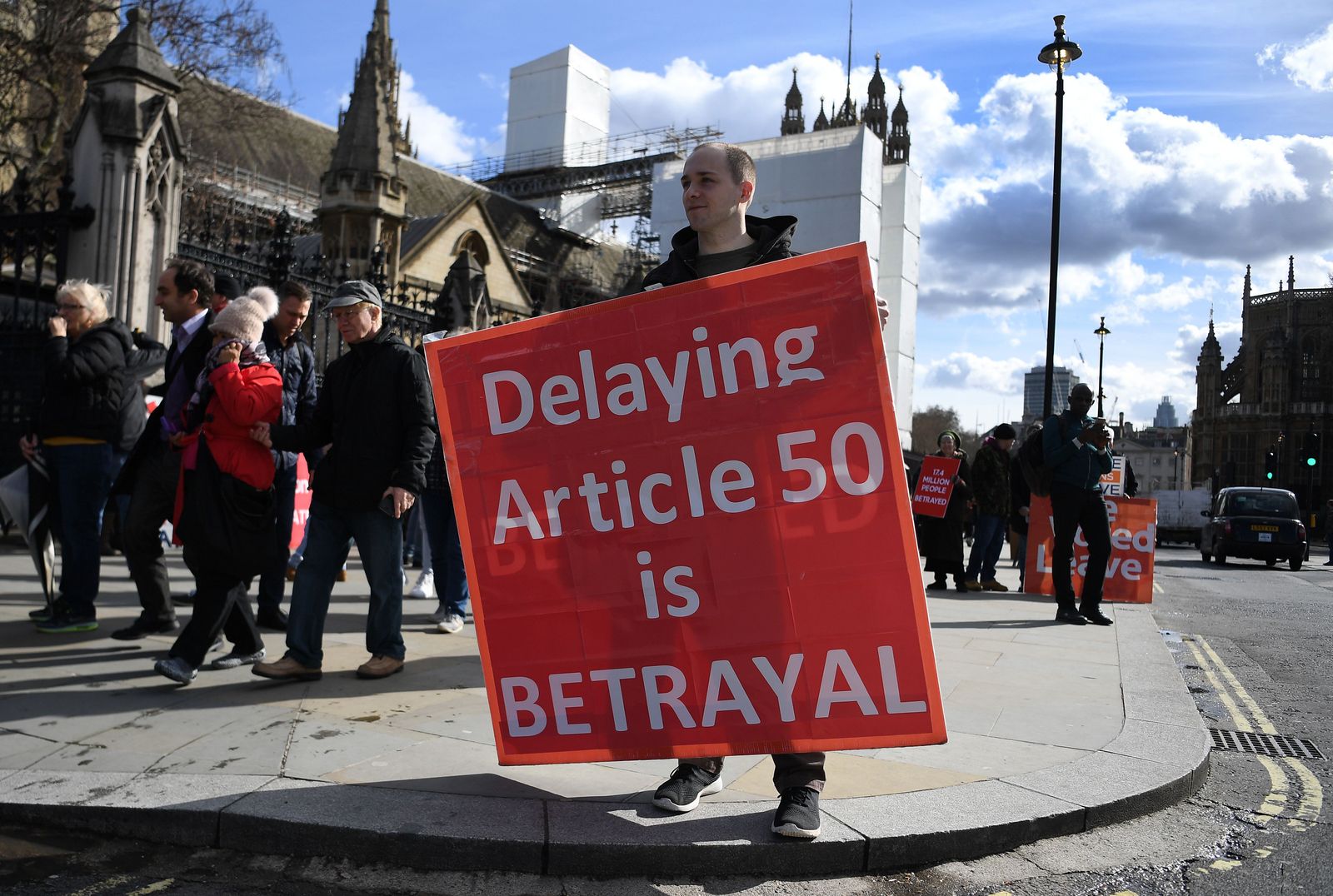 A protester in London