Jean Asselborn generally views the world through the sober lens of a diplomat. The Luxembourg politician is one of Europe's longest-serving foreign ministers and his country currently holds the six-month rotating presidency of the European Union. A short while ago, however, during a visit to the Greek island of Lesbos, Asselborn lost his composure.

Thousands of migrants are setting off from Turkey to Lesbos each day, families with children included. Yet despite the efforts made by the Greeks, there is still a lack of pretty much everything: toilets, rest areas, private sphere. "If I were the father of a family, would I have confidence here that I was in good hands with the EU authorities?" Asselborn wondered aloud.

Lesbos and other such hotspots are a significant focus of efforts by the European Commission and German Chancellor Angela Merkel to find a solution to the refugee crisis. They would like to establish initial reception centers where refugees will not only be registered, but also housed until a cursory review is conducted to determine whether they might qualify for asylum or protection under the Geneva Convention on refugees.

Under the second part of the plan, refugees from countries with an average EU-wide asylum recognition rate of 75 percent would then be distributed among the rest of the member states. The others would face deportation.

If the plan were to go through, it would be a success, especially for Merkel because it would slow the flow of refugees toward Germany. Unfortunately for her, though, the plan isn't yet working. And those, lilke Asselborn, who have seen the conditions on Lesbos first hand, are left with the concern that refugees will not see these facilities as the start of a new life in Europe. Rather, they will likely see the centers as a dead-end.

"The hotspots can only work if we have fair distribution of refugees within Europe," says European Parliament President Martin Schulz of Germany. An "EU that disintegrates into its component parts" will not be able to handle the refugee crisis, he says.

A Lack of Unity

That becomes clear at the hotspots. The primary problem is that there is currently no unity in the EU regarding what tasks the centers should handle. Leading European politicians don't share Merkel's idea -- chief among them is Italian Prime Minister Matteo Renzi and his interior minister, Angelino Alfano. The two feel that Italy has already done its share in registering refugees, particularly on the island of Lampedusa.

Renzi isn't even considering the idea of caring for tens of thousands of refugees for weeks on end until it is clear whether they can stay in Europe or not, especially not without aid from the EU. "Italy is ready for hotspots," he said back in September, "but Europe has to redistribute the migrants."

During a recent meeting of a small group of European officials, including French Prime Minister Manuel Valls, Renzi bluntly stated that, if necessary, he would simply send refugees north.

Renzi's obstructionism has not gone unnoticed in Berlin, and it was no coincidence that no representative of Italy was invited to a meeting in Brussels on Oct. 25 of countries along the so-called West Balkan route, the path that most refugees are now taking as they make their way from Turkey to Germany. Renzi saw the lack of an invitation as an affront. The official line in Berlin was that Italy is not located along the route, but at the same time, sources said they wanted to send the message that Italy hasn't done enough to help manage the crisis.

It's questionable whether things are going any better in Greece. The country is still suffering considerable hardship and although the number of refugees traveling across the Mediterranean to Italy has decreased significantly, the influx coming into Greece on their way along the Balkan route to Germany has not slowed. In order to handle the crowds, four new hotspots are to be created on Greek islands located close to the Turkish coast later this month. The country is currently receiving aid from Germany, including 12 devices worth €200,000 used to collect refugees' fingerprints during registration. In addition, Germany's federal police have deployed around 300 officials this year as part of the European border agency Frontex.

But in order to support countries like Greece in the construction and operation of accommodations that can handle up to 50,000 refugees, European Parliament President Schulz is calling for EU aid. "Those who are securing the EU's external borders are taking over a community task. That's why it is only logical that they receive financial and staffing assistance from the EU."

But it's right at these hotspots where the first problems start to develop. Often, the refugees put greater faith in the dubious tips provided to them by the human-traffickers than in the information they are provided by EU staff. And, unfortunately, the smugglers have been spreading fears that the migrants will simply be deported once they arrive in the centers. This is keeping many from submitting asylum applications there.

The biggest problem, however, is the lack of a clear answer to the question as to what happens to refugees who have little chance of remaining in Europe. How will these people be prevented from heading towards Germany on their own?

"It's a delicate issue," says one high-ranking EU official. "After all, the Greek government doesn't want to be accused of putting migrants in internment camps."

Indeed, refugees attempting to escape from fenced-in camps is the one image that has yet to plague this European refugee crisis. 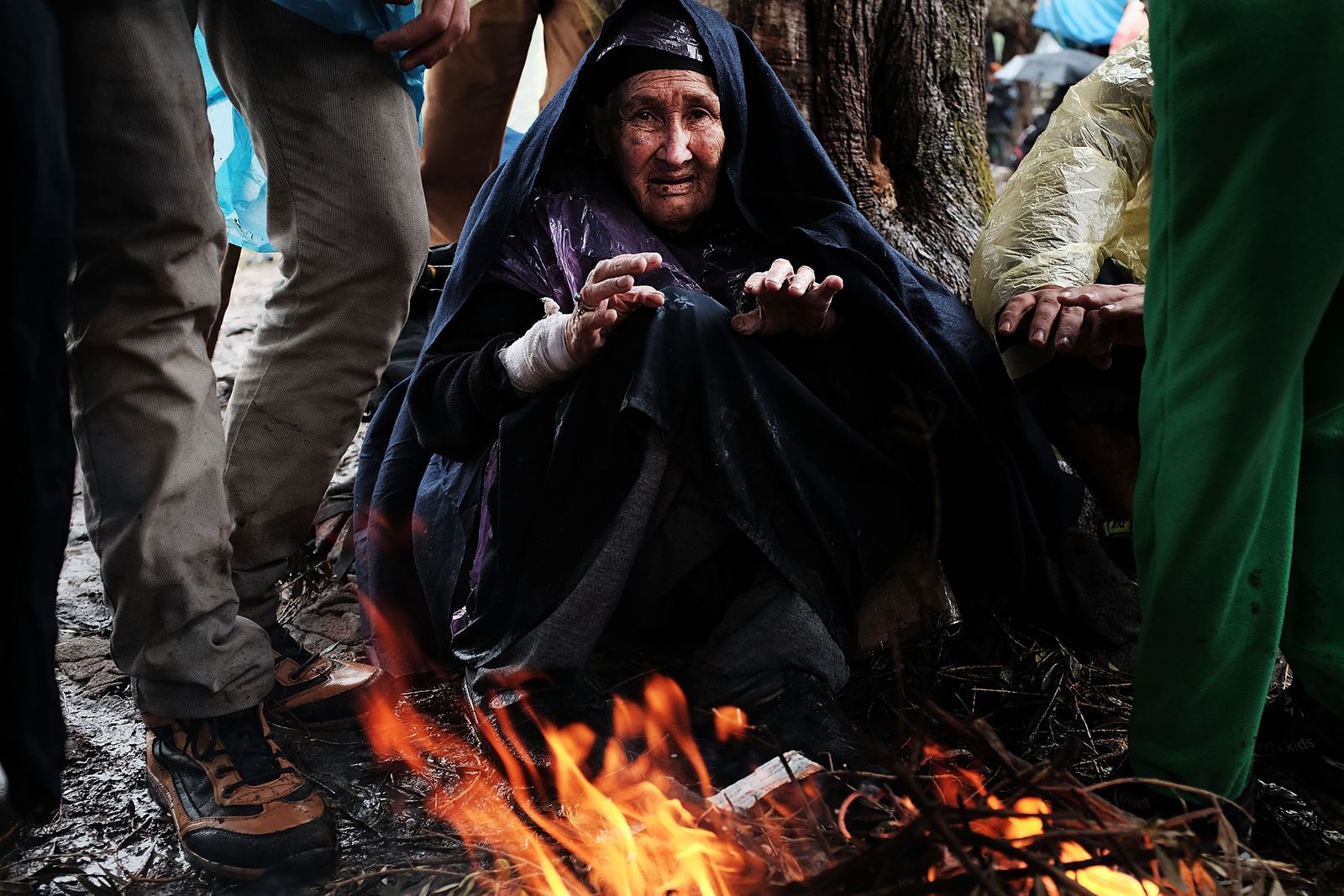 A 90-year-old warms herself by a fire at the increasingly overwhelmed Moria camp on the island of Lesbos on Oct. 23, 2015 in Mitilini, Greece. 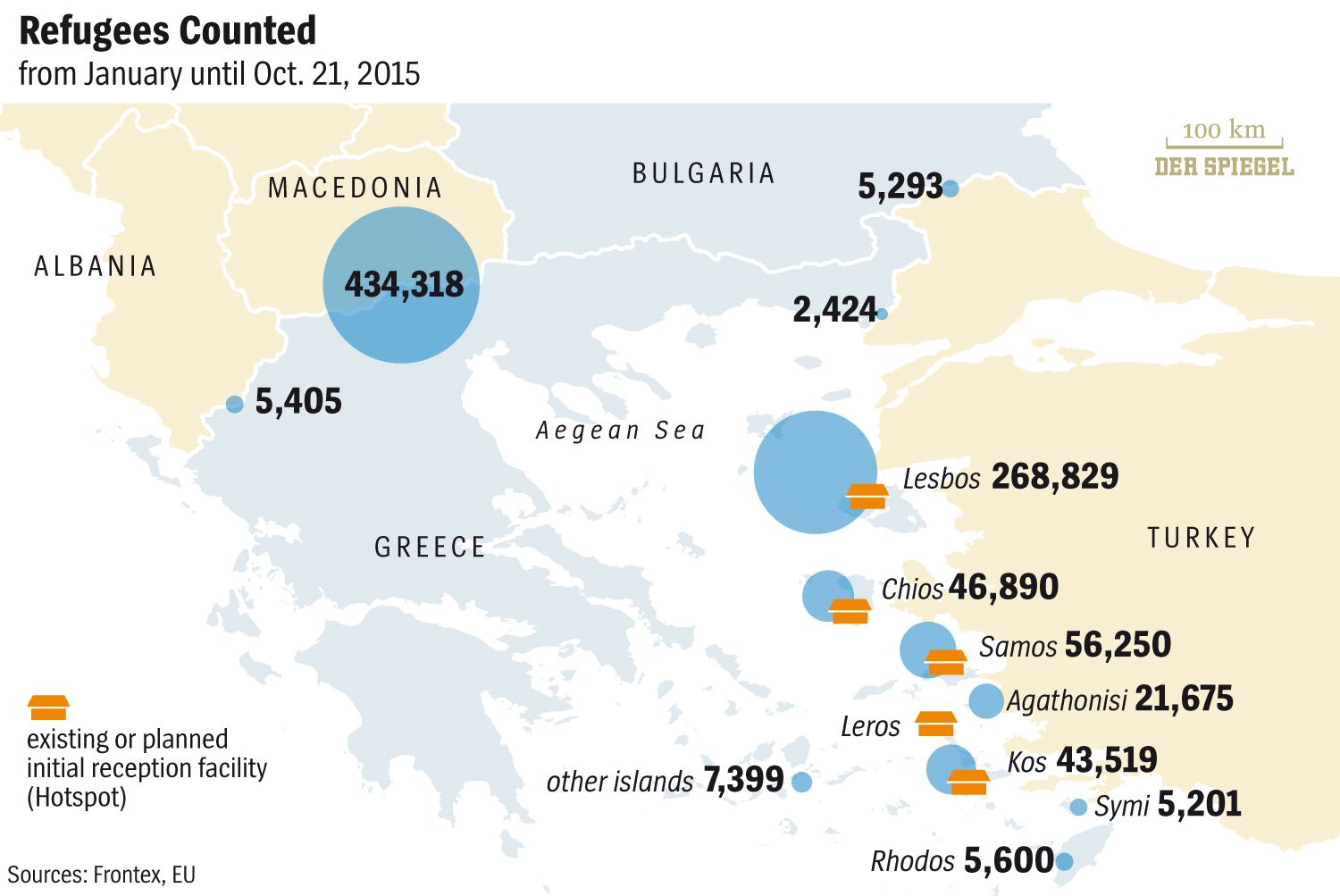 Graphic: Refugees hotspots in the Aegean and the Balkans.