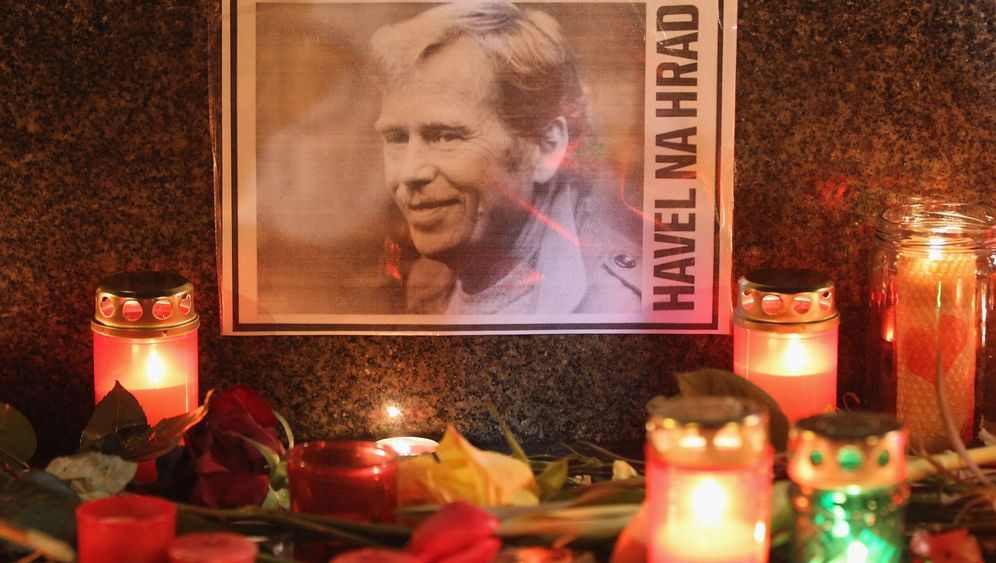 In life, great Czech dissident Vaclav Havel was modest, even shy at times. But in death, he will be the focal point of a week of mourning in the Czech Republic as millions in the country and across the globe pay their respects to one of the greatest of all anti-communist activists.

The Czech government will meet on Monday in Prague for a special cabinet session to address Havel's passing on Sunday. He will lie in state in St. Anna's Church on Monday and Tuesday before being moved to the Vladislav Hall at the Prague Castle on Wednesday. The government is also considering the passage of a special law to honor Havel, the key figure in Czechoslovakia's 1989 Velvet Revolution and later his country's president.

Already, however, tens of thousand of Czechs in Prague and other cities around the country have begun honoring Havel. With church bells ringing on Sunday evening, thousands gathered in both Wenceslas Square and Old Town Square, both key sites of the vast, anti-communist demonstrations in 1989, to lay flowers and light candles. Students read from Havel's works and many jingled their keys, a reminder of the 1989 protests, and sang songs from the period.

Vaclav Havel died on Sunday at the age of 75 from complications relating to chronic lung problems, the result of heavy smoking and his five years as a prisoner in communist jails. Both current and past world leaders have been effusive in their praise of Havel, honoring his inestimable contribution to the events which brought down communism in both his country and across the Eastern bloc.

'Fought for the Oppressed Everywhere'

"He was a great man, without whom freedom would not have been possible," said former German Chancellor Helmut Kohl, who led Germany at the time when the Berlin Wall fell, shortly after the communists were overthrown in Czechoslovakia. Kohl's foreign minister at the time, Hans-Dietrich Genscher, wrote in a Monday contribution for the tabloid Bild: "Europe has become poorer, as have we all. A great European, a humanist, has left us: Vaclav Havel." He continues: "His struggle was not just for the freedom of the Czech people. He fought for the oppressed everywhere."

Lech Walesa, the head of Poland's anti-communist Solidarity Movement, said on Sunday that "a great fighter for the freedom of nations and for democracy has died.... His outstanding voice of wisdom will be missed in Europe.... I am praying for the peace of his soul."

Havel paid dearly for his efforts, though. In the 1970s, he was jailed for criticizing his government's human rights record. He also ended up in prison on two later occasions for his work organizing those who did not support the communist regime. He was fired from his job at a theater following the Soviet invasion that crushed the Prague Spring in 1968.

"You do not become a 'dissident' just because you decide one day to take up this most unusual career," he wrote in his well-known 1978 essay "Power of the Powerless." "You are thrown into it by your personal sense of responsibility, combined with a complex set of external circumstances.... It begins as an attempt to do your work well, and ends with being branded an enemy of society."

His Most Important Work

Unlike his contemporaries Lech Walesa and Mikhail Gorbachev, Havel retained political relevance even after communism had collapsed. He served as president of Czechoslovakia from 1989 until Slovakia split off in 1992. He continued to serve as president of the Czech Republic until 2002. His time in office served as a sharp contrast to his long career as a respected, if not officially accepted, playwright and essayist.

Havel was far from universally admired as a politician, though. He and current Czech President Vaclav Klaus had a long had a contentious relationship. Havel blasted Klaus in 1997 for a party financing scandal which led to the latter's resignation from the office of prime minister. Havel accused Klaus of having "an apathetic, almost hostile attitude toward everything that bears even a distant resemblance to a civil society."

The overreach, however, did nothing to harm Havel's standing with the Czech people. "Vaclav Havel's most important work," famous Czech writer Milan Kundera said prior to Havel's death, "is his own life."