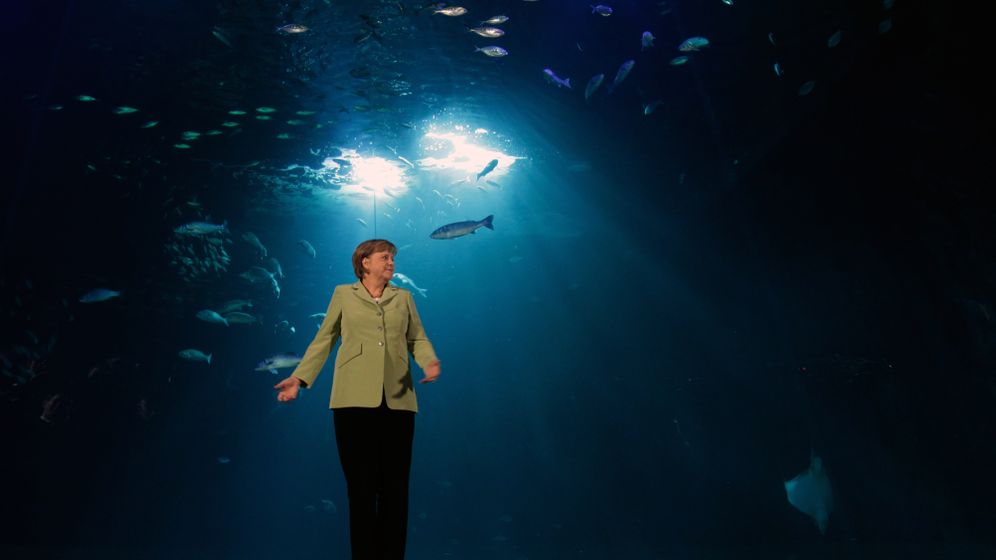 Photo Gallery: The Search for a New Europe

Politics is a strange business, and one of its premier oddities is that monumental changes are rarely heralded by great speeches. Addresses indicating a shifting course tend not to be of the visionary variety. And the public attention paid to such utterances often has no relation to their far-reaching consequences.

Often, in fact, it is only a tiny verbal adjustment that hints at a great change. Or a slightly different tone presaging a new direction.

Listening closely to Chancellor Angela Merkel in recent weeks has revealed just such a change in tone. It has been a careful shift, extremely nuanced. But it has become clear that her well-known melody is now a new one.

"We need a so-called fiscal union," she said during an appearance on German public broadcaster ARD last week. "Which means more joint budgetary policy." Up to that point, Merkel had merely repeated that which she always demanded. But then came the new tone: "More than anything, we need a political union," she said. "That means that we must, step by step through the process, give up more powers to Europe as well and allow Europe oversight possibilities."

Merkel is carefully preparing the public for the possibility that great changes are coming and that established certainties are no longer valid. Her message is that Europe only has a future when the Germans too give up large portions of their national sovereignty. That is the extent of her message, but it is plenty nonetheless.

It shows clearly the extent of the threat Merkel now believes the European crisis presents. The chancellor is not a master of the apocalypse in the vein of Green Party patriarch Joschka Fischer, who pronounced earlier this month that "the European house is in flames." That is hardly Merkel-esque locution, but she is fully aware that the abyss is no longer very far away.

This coming Sunday, general elections in Greece will indicate whether a country, for the first time, will be forced to leave the euro zone. In Spain, the situation has become serious, with Madrid over the weekend formally asking for assistance from the euro bailout fund. Euro-zone finance ministers have said they would make up to €100 billion available, more than expected. And Spain is not an economic dwarf -- it is the fourth-largest economy in the euro zone.

The debt crisis has transformed into a crisis of faith. Few options remain for European Union heads of state and government. Either they will succeed in fixing the birth defects that have plagued the common currency in recent years, or the European Union -- the largest economic zone in the world -- will sink into the mire of failing banks, bankruptcies and collapse. Such a development would significantly overshadow the chaos that erupted after Lehman Brothers went broke in 2008, predicts The Economist. "Something must happen," demand British historian Niall Ferguson and the American economist Nouriel Roubini in a dramatic appeal to the German chancellor.

What is to be done? The currency union has to become a political union. At that point, at least, everyone seems to agree. But what exactly that means is a matter of some dispute between Berlin and Paris, Helsinki and Rome.

Countries like France and Italy would like to see euro bonds, which would communalize European debt. Germans are opposed to the idea because they fear that, in the end, they would be forced to pick up the tab. Berlin, on the other hand, is prepared to give up national competencies to Brussels, a course to which Paris is opposed.

Because they have been unable to find agreement, European leaders have asked top Euro-crats -- European Commission President José Manul Barroso, European Council President Herman Van Rompuy, Euro-Group head Jean-Claude Juncker and European Central Bank head Mario Draghi -- to come up with a plan. They hope to share some initial proposals at the European summit scheduled for the end of this month. A concrete plan is to be ready by autumn.

The four leaders have begun speaking on the phone almost daily. This week, they are to meet to agree on a common proposal that will then be sent to European capitals.

For the moment, though, the plan is nothing but sketches of how the European construction might look in the end. The ideas being tossed back and forth between Brussels, Luxembourg and Frankfurt are incomplete, but they already hint at a concept that would mean nothing less than a European revolution.

The four are intent on making the currency union irreversible, and deepening it to become a political union. A completely different Europe would emerge from such a process.

The plan envisions nation states giving up significant elements of their sovereignty to European institutions. It would mean that the European Parliament would have to fight for relevancy with a new body that would be granted important oversight functions. The result would be a two-speed Europe, the core of which would be represented by the currency union.

At the heart of the deliberations is the creation of a real fiscal union, which would prohibit member states from taking on new debt on their own. Governments would only have complete control of funds that are covered by tax revenues.

Those needing more money than they generate themselves would have to register their needs with the euro group, made up of euro-zone finance ministers. They would then analyze the financial needs and the amount of funding requested from the different countries before deciding which were justified and which were not. Euro bonds would then be issued to finance the debt.

A new European body, which would also include representatives from the European Parliament, would be created to oversee the finance minister board. It would mean that the European Parliament would have to give up on its hopes of gaining more power over financial questions, but its competencies relative to other European issues would remain untouched.

The model favored by the European four would essentially become a construct that Germany has long rejected: a European club in which all members would be liable for the debts of others. But there is an important limitation: That liability would only apply to new debt.

Older debt, of the kind which currently sits at the heart of the crisis, would remain the responsibility of the individual member states. It remains open, however, how that pile of debt might ever be reduced. Already, many countries must already devote a large portion of their tax revenues to service that debt.

The United States of Europe

The idea developed by the Euro-crats would force governments to live within their means and to spend only that money which they take in themselves. Only then would they be able to maintain full national control of their expenditures. Should the concept work, it has the potential of transforming the current debt union into a union of stability.

The model sounds almost too good to ever come true. So far, not even Germany -- which enjoys extremely low interest rates and a strong economy -- has been able to get by without taking on new debt. It would also mean that even paragons of fiscal responsibility might at some point have to ask Brussels for help in the case of rising interest rates or an economic slowdown.

As a result, a significantly watered down version of the plan is already making its way through Europe's capitals. Accordingly, only new debt which exceeds 3 percent of a country's economic output would have to be rubber-stamped by the finance minister group.

A further chapter of the concept developed by the four Euro-crats addresses the need to inject more democracy into European resolutions. Commission President Barroso has highlighted the need to outfit a political union with democratic legitimacy. One such idea envisions the European Commission president being elected directly by European citizens. Another concept under consideration, say sources in Brussels, is that of turning the office of commission president and European Council president into one -- a kind of "European president."

Some ideas have already entered the public discussion, such as a European-wide deposit guarantee. The proposal calls for the creation of a deposit insurance fund to be developed over the period of 10 years whose size would be the equivalent of 1 percent of all European savings accounts -- or roughly €100 billion.

A powerful, EU-wide bank supervisory body is also envisioned. They would not only keep an eye on systemically relevant financial institutions, but on all banks. Recent years have shown that in Europe, it was the seemingly unimportant banks that created some of the largest problems. That was true of the IKB Deutsche Industriebank in Germany and the same phenomenon can now be seen in Spanish savings banks.

Even before it has been officially presented, however, the new Euro Pact faces extremely high hurdles. National parliaments would have to be amended across the continent and several countries would be required to hold referenda. Such a poll might even be required in Germany, as hinted at by the Constitutional Court ruling on the Lisbon Treaty. Should Berlin seek to transfer more power to Brussels on financial questions, according to the most common interpretation of the ruling, then a referendum would become necessary.

It would be the beginning of the United States of Europe. And Germans would likely only be able to approve the plan if it could credibly guarantee that the new political construct would commit to emulating Germany's culture of stability.

As such, the four European architects are aiming at establishing a new European consensus. Germany would have to take on additional risks within the euro zone. In return, southern Europeans would have to grant Brussels control over their national budgets -- according to German principles.

It would be an experiment with uncertain results. It could, in the end, be the savior of the common European currency -- or it could mean the implosion of Europe. Such a plan could very well calm international financial markets. But it could also be that Europeans wouldn't accept it. Still, it might be the last chance to prevent a collapse of the euro.

Next Monday, heads of state and government of the world's largest economies are meeting in Mexico for the G-20 summit. It begins one day after parliamentary elections in Greece -- and the rest of the world will want to know how Europe intends to save its common currency. At the G-20 summit last year in Cannes, developing economies such as Mexico and Brazil lectured Europe on what had to be done. Merkel, Van Rompuy and their counterparts would like to avoid a similar embarrassment this time around.

At a meeting of the European Economic and Social Committee in Brussels last Thursday, Euro-Group head Jean-Claude Juncker said that partners in the US and China often tell him that Europe is "behind the curve." He warned that "we are behind the developments." It is time, he said, to consider steps that have thus far been considered unthinkable. "The world has to know that we are absolutely determined."

5 Bilder Photo Gallery: The Search for a New Europe
Merkliste