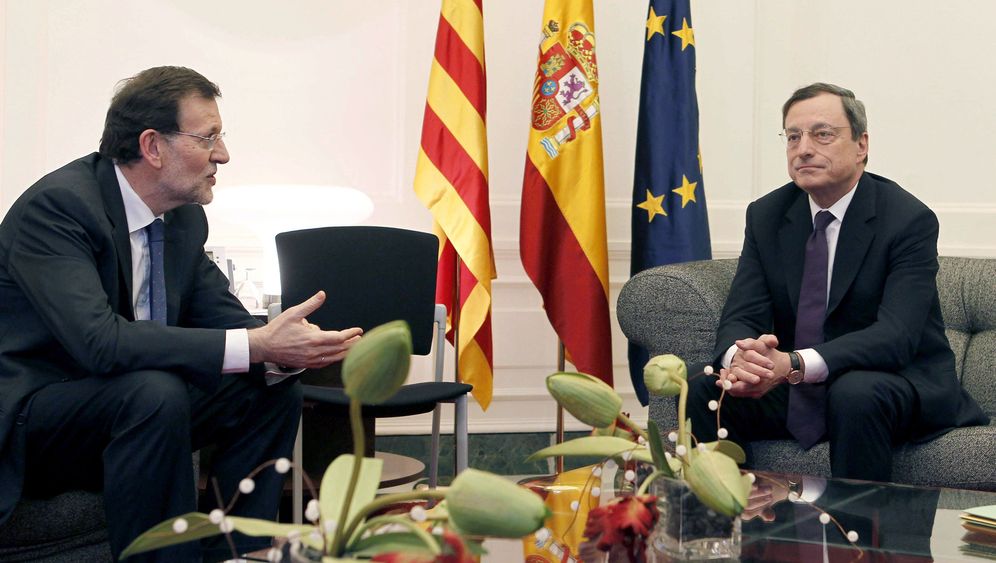 It was one of those puzzling sentences that central bankers like to leave hanging in the air. The temporary European Financial Stability Facility (EFSF), the rescue fund for cash-strapped euro-zone countries, has not been very successful, admitted European Central Bank (ECB) President Mario Draghi at a press conference in Barcelona last Thursday. "Its functioning fell short of both expectations and needs," he said.

Draghi left it up to the journalists in the audience to interpret what is wrong with the fund and what needs to be changed. Furthermore, the Italian banker failed to mention that his organization has long been exploring ways of expanding the scope of the EFSF, or its permanent successor, the European Stability Mechanism (ESM), to give the bailout mechanism more firepower.

Euro Group chief Jean-Claude Juncker had asked Draghi for his advice in the matter two weeks earlier. Originally, the ESM, which will be launched in July 2012, was only intended to help out debt-ridden governments, which would have to meet strict requirements in return. But recently, there have been serious closed-door discussions about direct aid for banks. In Brussels, a working group is also looking at this delicate subject.

Time is running out. With the financial crisis now in its fifth year, the banks' problems remain unresolved, and in some countries they are even jeopardizing the stability of the state -- and the future of the European common currency.

Throwing Money into a Black Hole

Spanish banks are particularly unsteady. They are sitting on roughly €1 trillion ($1.3 trillion) in shaky loans related to the ailing real estate sector -- and urgently need fresh capital as a risk buffer. The estimates for the cash shortfall range from €50 billion to €200 billion.

Since such sums of money would overburden both the banks and the government budget, experts believe that the Spanish government should urgently seek help from the EFSF. But Spanish Prime Minister Mariano Rajoy is resisting this move, not just because the euro partners would basically have a say in governing the country, but also because his entire nation would then be branded as high risk -- and would probably find itself cut off from the international financial markets for a long time.

Direct aid for banks from the euro countries is a sensitive issue, though. The German government rejects the idea flat out for fear that its money will disappear into a black hole. Sources at Germany's central bank, the Bundesbank, say they have no idea what's going on in the Spanish banks. This lack of knowledge is a consequence of a dangerously nation-centric approach that Europe has allowed to flourish in its financial industry. The sector is more internationally interconnected than any other, yet each country controls and, if necessary, rescues its banks on its own.

Clemens Fuest, a German economist who teaches at Oxford University and advises the German government, is convinced that, "without a fundamental reform of the European banking sector, the euro is in jeopardy." It is the financial industry, he argues, that repeatedly endangers the monetary union. Real estate bubbles such as the ones in Spain and Ireland could not have formed without the active help of local banks, he says. "The national watchdogs have failed to prevent this."

Following the collapse of Lehman Brothers, the Europeans continued as before -- which is a decisive mistake, says Daniel Gros, director of the Center for European Policy Studies (CEPS), a Brussels-based think tank. "Back in October 2008, the Netherlands proposed the establishment of a European bank rescue fund, but this failed due to resistance from Germany," says Gros. Instead, every country focused exclusively on its own problems, and the European banking system "was, on the whole, not sufficiently stabilized," he contends.

Take, for example, bank bailouts: Too many ailing institutions were kept alive by national funds, but at the same time EU conditions for receiving aid restricted their operations to a national level and further weakened the banks. What's more, the safety mechanisms to protect customer deposits are still organized on a national basis.

Bank regulation is another example: Global banking groups like BNP Paribas and Deutsche Bank still have to deal with 27 different European national regulatory agencies, which often go to great lengths to hide information from each other. The new European Banking Authority (EBA), which has a staff of only 62 and limited power, is desperately struggling to bring some semblance of coordination to the sector.

The most recent example of the wavering course of European banking policy was supplied by euro-zone finance ministers at a meeting in Brussels last Wednesday. A heated debate erupted over the issue of the size of the capital buffer that banks should be required to have in the future. After over 12 hours of negotiations, German Finance Minister Wolfgang Schäuble had had enough. "We'll see each other at the Champions League final in Munich," he said with annoyance in the direction of his British colleague George Osborne and headed for the exit at 11 p.m.

But the British chancellor of the exchequer continued unruffled and, around midnight, proposed additional amendments to the controversial draft legislation. Having reached the end of their tether, the remaining finance ministers and a German undersecretary finally acquiesced. Everyone knew that the British -- with their key financial center, London -- had to be on board for any agreement that was made.

Early Thursday morning, Osborne was able to proclaim victory. The British will now be able to force their banks to hold up to 12 percent core Tier 1 capital -- more than some other countries wanted. With the move, they are putting pressure on the entire financial sector to act. If the plans are actually implemented, European financial institutions will require many hundreds of billions of euros in additional capital, bankers warn.

While the German government fundamentally supports requiring banks to hold larger capital buffers, it is unclear how such large amounts of money can be raised so quickly. Spanish banks already have too little capital to counterbalance looming losses from high-risk real estate loans. The government in Madrid is working feverishly on a so-called bad bank that would relieve institutions of their toxic assets. The favored model would call for the banks to finance the measure themselves, possibly backed up by guarantees from state development banks. The plan B, as the Spanish see it, would involve direct EU aid to the banks.

Experts like Fuest, Deutsche Bank chief economist Thomas Mayer and CEPS economist Gros favor such a solution. But direct aid from the ESM can also only be granted under strict conditions. "He who pays the piper calls the tune," Mayer remarks. Fuest adds: "Spain has to relinquish the supervision of its banks to Brussels."

According to the economists, the case of Spain shows once again that the euro zone's approach to its banks is outmoded. The experts see ESM aid to Spanish financial institutions as the first step toward a far more integrated European banking market.

In the coming days, Gros will present a paper that proposes a joint European fund for insuring deposits and liquidating ailing banks. "It would make sense to create a European bank rescue fund, which would be financed through fees paid by the banks. This would take roughly 10 years," says Gros.

Already one year ago, Fuest went on a tour to promote the idea of joint institutions in Europe. This week, the German parliament, the Bundestag, has invited him to attend a hearing. What the Oxford professor will recommend to the legislators is largely consistent with the proposals made by Gros and is nothing short of a minor revolution.

"The national supervisory agencies have to be replaced by a strong European supervisory body," says Fuest. "National deposit insurance funds also have to be consolidated. Furthermore, there has to be a permanent European fund that rescues ailing banks or is able to liquidate them in an orderly manner." Fuest says that it still has to be discussed whether this should be achieved with money from the ESM, or a regular fee paid by European banks, or whether state guarantees alone should finance it.

'More Desirable than Ever'

Economists are of course free to promote relatively unrealistic ideas -- but politicians are also under pressure on another front: Deutsche Bank CEO Josef Ackermann, who already proposed a European bank rescue fund back in 2009, says that such a fund is "more desirable than ever -- to stabilize banking systems, to restructure large international banks, to secure the domestic financial market and to avoid unfair competition due to national regulations." The re-nationalization of European banking markets is alarming, he says, and it stands in the way of the urgently needed growth in crisis-stricken countries.

Many officials at the ECB also agree that the firefighting operations against the conflagrations in the industry finally have to be centrally organized. For weeks now, Draghi's new right-hand man, Jörg Asmussen, has been emphatically promoting the idea of a joint fund modeled after Germany's bank rescue fund, the Special Fund for Financial Market Stabilization (Soffin). And the ECB president himself said at a recent conference in Frankfurt that a strengthening of bank supervision and a safety net for banks have become more "urgently" needed on the European level.

But as pressure is growing to make banks a pan-European issue, there is also massive resistance to such plans. "The countries of the monetary union should first press ahead with greater integration of economic and financial policies," says Michael Kemmer, general manager of the Association of German Banks. "Only then would it make sense to also more strongly centralize regulation and supervision of the financial sector, and to consider a European bank rescue fund."

The German government suspects that behind these proposals is an attempt to make strong countries like Germany foot a bigger part of the bill for bailing out banks. Berlin rejects a joint rescue fund. Instead, German government officials say that it would be better to agree to common European standards for liquidation procedures and safety systems.

Indeed, the German government wants to prevent the bailing out of Spanish banks from setting a precedent. Bailing out German banks at the taxpayers' expense has already not been particularly popular. Now, it would be virtually impossible to gain majority support in the Bundestag to prop up Spanish banks that gambled and lost on the country's construction boom.

What's more, it would hardly end with bailouts for Spanish banks. Ireland, which only had to be bailed out by the rescue fund because of its banks, and thus has a much higher level of government debt than Spain, could insist on equal treatment. The Irish are already demanding discounts at EU summits because they have to pay extremely high interest rates for the loans to rescue their banks.

It's a similar story with the European Commission, where many officials are opposed to special programs to rescue Europe's banks. "This would open Pandora's box," says one of the highest-ranking officials on the Commission. It is only when countries officially seek aid from the rescue fund that the experts in Brussels have been able to push through precise requirements on the necessary structural reforms and austerity measures. Spain apparently wants to avoid this burden.

Living Beyond Their Means

To make matters worse, the banking sector is only one of the many problems facing Spain. Youth unemployment is running at over 50 percent. Large sectors of the industry are said to be no longer competitive, the labor market is inflexible and the Spanish have lived far beyond their means for many years.

Fresh money from Europe, with repayments guaranteed by others, could cause Spain's reform efforts to run out of steam. Many structural reforms that the government has promised are, at least for the time being, only on paper.

But no matter how cautiously Europe aids its cash-strapped banks, there's no denying one fact: The euro partners have to overcome their financial nationalism. Otherwise Europe's banks will remain a constant trouble spot and place the continent at a permanent competitive disadvantage.