It was another busy weekend for Wolfgang Schäuble. On Friday, the German finance minister had just finished informing the German parliament's budget committee about the new rescue package for Greece when it was time to leave for Mexico City, where the G-20 finance ministers and central bank governors met over the weekend. At around noon on Sunday local time, well before the end of the conference, it was already time for Schäuble to head back to Berlin. After all, he has another important appointment in the German capital on Monday afternoon: The German parliament, the Bundestag, is voting on the second Greek bailout package.

Schäuble spent about as much time in the air this weekend as he did on the ground in Mexico. But in Mexico City, the indefatigable finance minister seemed in a good mood, even wired. Between countless other appointments, Schäuble managed to fit in an appearance at the local chamber of commerce and industry, where he was supposed to talk about the state of the world -- including, naturally, the situation in Europe.

In his introduction, the German ambassador tried to strike a humorous note. He apologized that the wine being served with dinner didn't come from Schäuble's home region of Baden in southwestern Germany. The finance minister gave a weary smile as he delivered his droll response: "If the wine here is not from my region, that is not my problem, but yours." After all, he said, he himself would soon be able to drink wine from Baden again.

'The Euro Crisis for Non-Europeans'

Schäuble's speech to the more than 100 German and Mexican businesspeople in the audience could have borne the title "The Euro Crisis for Non-Europeans." He emphasized how much the members of the monetary union had achieved over the past few months, mentioning budget-consolidation efforts, structural reforms in labor markets and the adoption of the fiscal pact which will make it easier to punish deficit offenders. He also said that a solution had been found for the time being for the "special and unique case" of Greece.

Schäuble's central message was that Europe has put its house in order. It was a message that, in his opinion, justified jetting halfway around the world and back in a weekend. After all, the main target group was his counterparts from the G-20 states. The Group of 20, made up of the 20 most important economies, represents 90 percent of global economic output, 80 percent of international trade and two-thirds of the world's population. It's an audience that Schäuble would very much like to convince.

At the Mexico meeting, there was much talk of Europe's comeback. It came, however, mainly from the Europeans themselves. The representatives from Brussels, Berlin and Paris patted themselves on the back at length, adding that it was high time that people shifted their attention to problems in other parts of the world.

They took pleasure in pointing out that budget deficits in Japan and the United States have recently been over twice as high as in the euro zone. Schäuble also took pains to mention that, at their meeting in 2010, the G-20 countries pledged to halve their budget deficits by 2013. It is not necessary to keep setting new targets, he said dryly -- one could also simply try achieving the goals that have already been set. "Italy has been much more successful in consolidating its budget than the US," commented one member of the German delegation with a mocking smile.

'It's Important To Give Europe's Leaders Credit'

With their strategy of assertively talking up their achievements, such as they are, Schäuble and his European counterparts seem to have impressed their global partners. Even the notoriously skeptical US treasury secretary, Timothy Geithner, appears to have been appeased. "It's important to give Europe's leaders credit in terms of a more credible response over the last four months," Geithner said in Mexico City on Saturday. Even if Geithner put the emphasis on "the last four months," Europeans will be pleased to have received some praise, however faint, from Washington. It marks a change from the constant exhortations to "do more."

As successful as the Europeans' constant back-patting may be, there is still a major disconnect. On the one hand, the euro-zone member states are hinting that this may be the beginning of the end of the euro crisis. But on the other, they also want the rest of the world to continue pumping hundreds of millions of dollars towards addressing the problem. Even after this weekend's summit, one of the greatest points of strife within the G-20 states remains if and how the International Monetary Fund (IMF) will be provided with more resources -- not exclusively, but largely to provide aid for crisis-stricken southern European countries in the worst-case scenario.

IMF chief Christine Lagarde wants to outfit the monetary fund with an additional $600 billion (€450 billion), with $200 billion of that money coming from Europe. But the largest amount would come from non-European industrialized nations and emerging economies in Asia and Latin America. The US has already stated that it does not plan to make additional funds available.

The emerging economies have so far fussed over the increase, pointing out that Europe is much richer than them and needs to start by doing more to help itself. They have argued that one should only talk about increasing the IMF's resources after the European countries have done more to increase their contribution to the euro bailout fund.

And despite his praise of Europe, US Treasury Minister Geithner once again called on the Europeans to increase their contributions to the rescue fund. "There is broad agreement that the IMF cannot substitute for the absence of a stronger European firewall and that the IMF cannot move forward without more clarity on Europe's own plans," he said. Geithner's comments were largely directed at Berlin, which has so far refused to increase the size of the euro backstop fund.

Slowly, though, it appears that the German government is also starting to reconsider its strict "no" to an expansion of the firewall. Over the weekend, German news agency DPA cited government sources indicating Berlin is considering increasing the size of the future bailout fund from the planned €500 billion to as much as €750 billion, by combining leftover funds from the current European Financial Stability Facility (EFSF) with those of the permanent European Stability Mechanism (ESM), which is scheduled to go into operation on July 1.

In Mexico, Schäuble made no efforts to deny the reports. He noted that European leaders had agreed to review the development of the EFSF and ESM in March and to reach a decision by March 31.

So far, Schäuble and the government in Berlin have resisted calls to expand the firewall. And prior to the summit in Mexico City, the finance minister said the answer to those demands was a "clear no".

'The Mother of All Firewalls'

Berlin is increasingly isolated on the issue. Over the weekend, Angel Gurria, the head of the Organization for Economic Co-operation and Development, told bankers he believed a financial stability fund would need to be equipped with at least $1.5 trillion, almost three times what the EU and IMF have so far pledged. "We still have to build the mother of all firewalls," he said. "The more credible it is and the bigger it is, the less likelihood we will have to use it."

For now, it appears that finding a solution to the problem has been delayed. "Because the situation has quieted down, there is no pressure for a decision," one negotiator said. In the end, most of what was discussed in Mexico City was non-binding. It appears unlikely that any firm decisions over an increase to the IMF's resources will be made before the fund's spring meeting in April, even if Schäuble has pledged otherwise. Jens Weidmann, the head of the Bundesbank, Germany's central bank, admitted that decisions on the issue had been deferred.

In these times, though, two months is an eternity. That's something the Europeans know all too well. Too often, they have falsely believed that the worst had already passed. And it is quite possible that in the future Wolfgang Schäuble will still need to swiftly jump in here or there and save the world again. 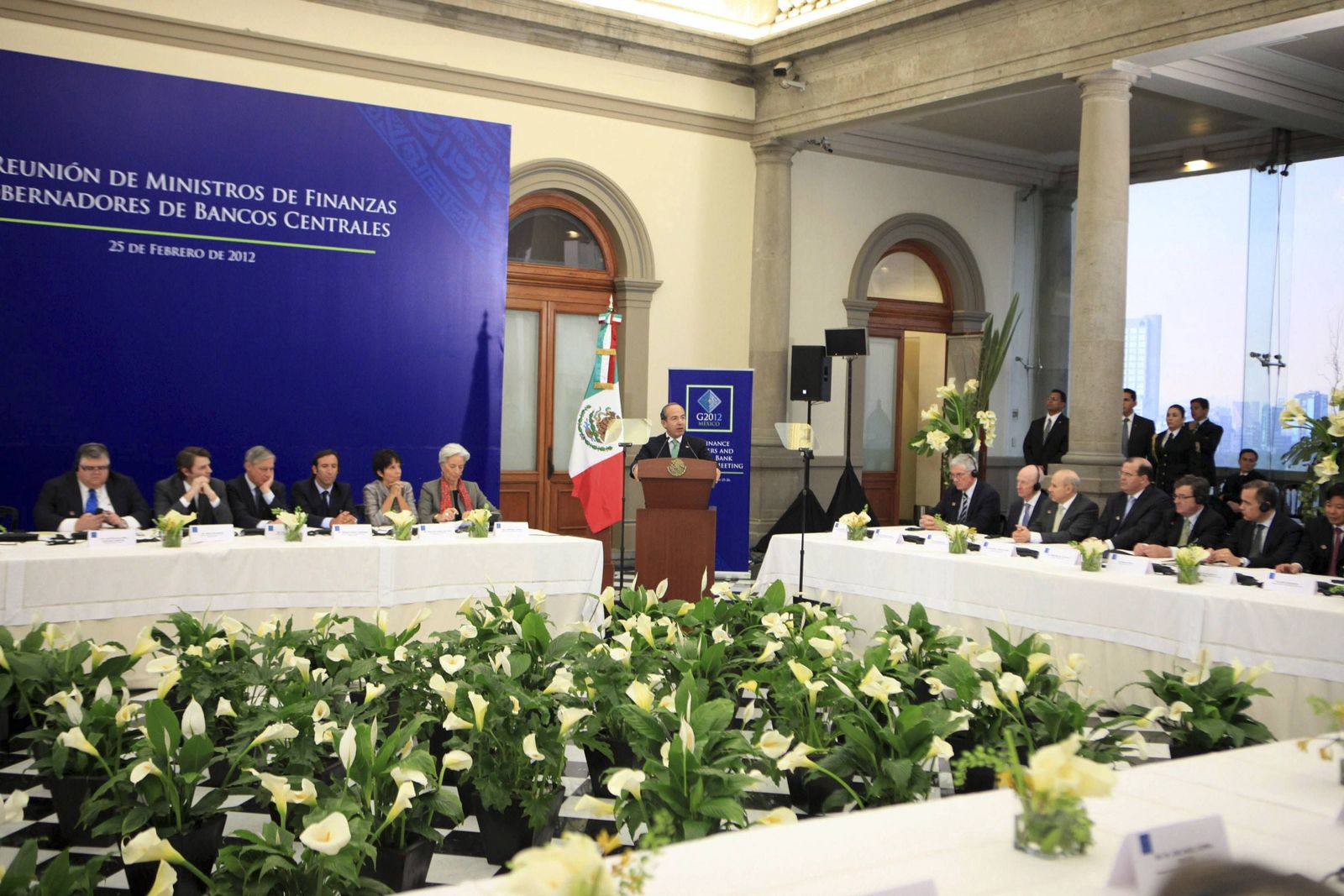 The G-20 meeting in Mexico City on Saturday.