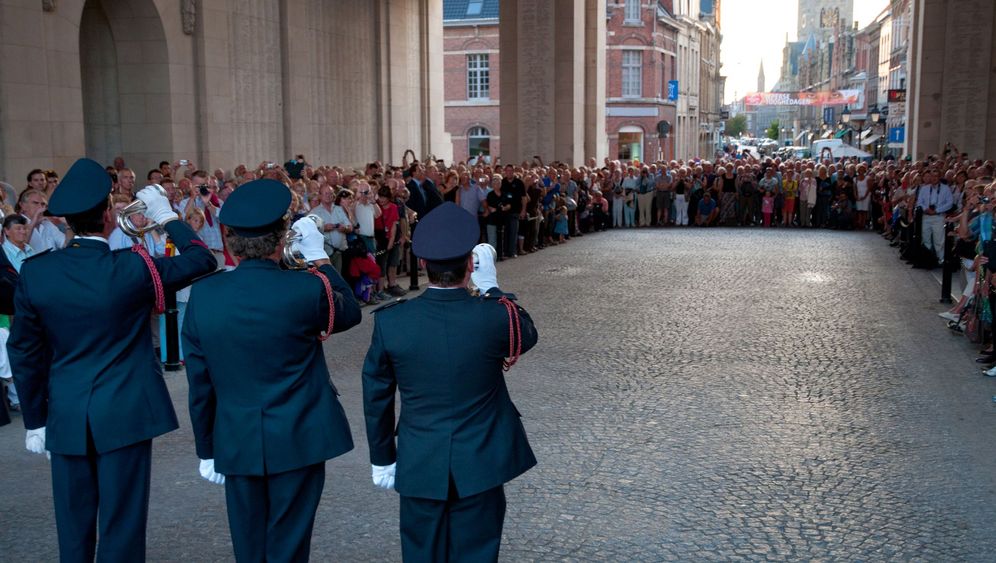 Tyne Cot is the largest British and Commonwealth war cemetery, with 11,956 graves, 8,369 of them unidentified. Many of the men here were killed in the rain-soaked Battle of Passchendaele in 1917, when the area around Ypres was churned into a stinking swamp, and wounded men who slipped off duckboards vanished into the sucking mud.

The soldiers buried at Tyne Cot have not been resting in peace this year. Workers equipped with roaring generators and pneumatic engraving tools have been re-inscribing and replacing thousands of headstones here and at British cemeteries across Belgium and France to prepare for an expected surge in visitors for next year's centenary of the outbreak of World War I.

"Our cemeteries and memorials are very powerful places, particularly for young people," said Peter Francis, a spokesman for the Commonwealth War Graves Commission. "With the centenary, we want to ensure that our sites are ready for that whole four-year period."

The world is getting ready to commemorate the start of the war that shaped the last century, killed 16 million people and has become synonymous with the futile loss of life and the onset of industrial warfare, where the individual counted for nothing in the face of artillery, machine guns, poison gas, flamethrowers, tanks and mud.

But hopes that the centenary will result in a truly common remembrance of the war may be dashed. Each nation is preoccupied with planning its own ceremonies, and Germany currently has no firm plans at all.

Britain has announced a £50 million (€58 million/$80 million) program of remembrance with events to mark the centenaries of landmarks including the 1916 Battle of the Somme, the 1916 naval Battle of Jutland and the 1918 armistice. Australia is spending a similar amount. France, which most of the 440-mile Western Front ran through, is staging a host of projects and exhibitions and, in 2011, opened a €28 million Museum of the Great War in Meaux, near Paris.

In Germany, preparations are far more low-key. The government has yet to even outline its plans. "We are in close contact with our partners to coordinate commemoration activities," a German government official told SPIEGEL ONLINE.

"Given the global and complex nature of the event a century ago, there is in each country a diversity of experiences and feelings," the official added. "Every nation has the right to its own approach. However, we see great will and engagement to strengthen the bridges between our peoples on the occasion of the centenary."

Berlin's Free University and the Bavarian State Library have launched the largest-ever international research project into the war, and the German Historical Museum in Berlin is planning a major exhibition next year. But the country isn't gearing up for big public ceremonies of national remembrance.

"For us, everything is secondary to World War II and Nazi rule, which dominates people's memories," said Fritz Kirchmeier, spokesman for the German war graves commission.

Kirchmeier said the centenary is an opportunity for Europe to find a unified way of commemorating the war. "The war doesn't divide us as much as World War II and Nazi tyranny; it doesn't polarize as much. It wasn't marked by war crimes like World War II," he said. "One could overcome national perspectives by looking at the losses suffered by the other side. For example, if you read out the names of the fallen, why not read out the names of Germans, British, Italians or Russians all together?"

It's a laudable suggestion. But there's a risk that Europe, amid all the pledges for common ceremonies, will miss that opportunity. There is little sense at present of a shared goal behind the preparations.

A Message of European Unity?

What could that goal be? Reconciliation? That's been achieved.

Sending a message that Europe, bound by the memory of the wars that devastated it, shares a common destiny and must keep on uniting? Bad timing. The euro crisis has put solidarity among European countries under severe strain. Besides, the new generation of leaders who have no experience of war no longer embody a link between the bloody past and today's need for unity.

Former Chancellor Helmut Kohl, who helped pull dead people from the rubble of Allied bombardments when he was a schoolboy in Ludwigshafen in World War II, often cited European integration as the key to lasting peace. His mantra was that disputes once settled on battlefields are now solved in the conference halls of Brussels.

He and French President François Mitterrand made a powerful gesture of reconciliation and unity in 1984, when they held hands during a ceremony at a war cemetery in Verdun, the site of one of the bloodiest battles of World War I.

The German government would like to see ceremonies next year convey a similar message.

"We must not forget the incredible suffering this cataclysm meant for a whole generation," the government official said. "We wish to stress the great achievement of reconciliation in Europe. Closer cooperation and integration in Europe proved to be the right way out of the dark shadows of the first half of the 20th century."

But many Europeans take peace for granted these days. And the ceremonies are unlikely to sway critics of further integration.

"Some people, especially in Europe, will try to use the centenary as an occasion to deliver a modern political message," British historian Max Hastings told SPIEGEL ONLINE.

"But, personally, I'd have thought the very obvious message is that Europe's wars have been a catastrophe for Europe and must on no account be allowed to happen again," Hastings continued. "I think most British people would strongly resist any idea of going further and saying this makes the case for European integration. That would be a very hot potato indeed politically in Britain."

In fact, British Prime Minister David Cameron is under pressure to tackle growing British skepticism toward the EU and to wring some concessions out of Continental leaders ahead of a referendum on Britain's EU membership in 2017.

Hastings said national memories were bound to be very different. "For France, this was the most traumatic experience of the 20th century; parts of the country were devastated, and it lost 1.5 million dead, far more than the British. Our country escaped more or less unscathed, although of course the British also suffered very heavy casualties."

"As for Germany, I'm pretty doubtful whether it's possible to arrive at a shared view," Hastings said. "While most Germans accept German responsibility for the Second World War, most Germans today are inclined to feel that the First World War wasn't their fault. Some of us historians believe that while no one nation bears all responsibility, Germany was the one nation that in July 1914 had the power to prevent a war, and chose not to exercise it."

Among historians, at least, the view that Germany bears considerable but not sole responsibility has long been established and is unlikely to be seriously challenged in the run-up to the centenary.

"The German and Austrian leaderships didn't want the war but they risked it; they played a dangerous game," says Professor Oliver Janz, a German historian at Berlin's Free University who is in charge of 1914-1918 Online, the largest ever international research project into World War I, which is compiling an English-language, Web-based encyclopaedia of the war due to go online in October 2014.

Janz, author of the newly published book "14," said that while public remembrance is likely to remain nationally segregated, research is already arriving at a trans-national view.

"We try to view the thing from a truly global perspective, from Japanese, South African, Latin American views; we have separate sections on each of those regions and also on neutral countries. We're trying to bring across the many perspectives of the individual nations and to arrive at a common picture as well."

A network of 800 historians will be involved, and the encyclopedia will run to 15,000 pages of text as well as photos and video footage.

"My impression is that it we have a chance to arrive at a trans-national view of the war because there's enough distance to it now. None of the combatants are alive," said Janz. "But achieving a common European view requires effort. People are accustomed to their national perspectives."

There is no sign so far that the centenary will have any shades of a victory celebrations in the nations that won the war. And no one is likely to dispute that the centenary offers an opportunity to explain how the war happened and its enormous impact on the last century.

"Our ambition is that a lot more people will understand that you can't understand the world today unless you understand the causes, course and consequences of the First World War," said Diane Lees, Director General of Britain's Imperial War Museum.

From today's point of view, it's a challenge to understand how countries allowed themselves to be maneuvered into a position in which whole generations of their men were sent to be slaughtered for a few miles, sometimes just meters, of ground -- for four endless years.

Here, maybe, lies the best chance for attaining a common European form of remembrance: The plight of the ordinary soldier, an overriding theme of the war, was the same on all sides.

In that sense the location of one of the opening events of the centenary seems particularly fitting: It will be held on August 4 at the British-run St. Symphorien Military Cemetery in Mons, Belgium, where an equal number of British and German soldiers lie side by side.