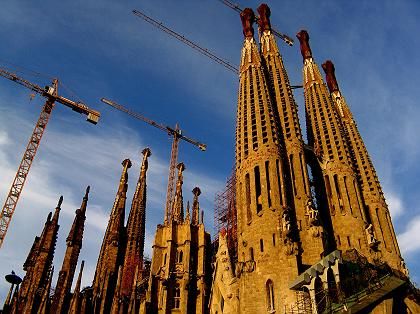 Barcelona casts a spell over its visiting guests. Over 7 million will come this year alone to Spains Catalan metropolis on the Mediterranean -- and more than half of them will be there for business rather than pleasure. Woody Allen just spent six weeks here filming his latest movie in the citys harbor quarter Barceloneta, on its nice sandy beaches, along its noble boulevard Paseo de Gràcia and in the Santa Maria del Mar church.

Scarlett Johansson, Allens new cinematic muse, plays an American tourist who falls for more than just the modernisme curves and flourishes of Antoni Gaudìs fanciful architecture. Mellowed by age, the iconic director says his project this summer will be a love letter to Barcelona. On some evenings he even popped up in the jazz bar of a hotel to play his clarinet just like he does back home in New York.

Barcelona seduces them all. Since more Dutch now travel here rather than to Paris, the Van Gogh museum in Amsterdam has dedicated a summer exhibition to the city. The Documenta, an important modern art show happening every five years in the German city Kassel, invited Ferran Adrià, originally from Barcelonas shabby industrial suburb L'Hospitalet de Llobregat, this year. The 45-year-olds creations, developed in his kitchen cum laboratory in the citys center, have helped Barcelonas culinary scene reach new levels of global fame. Barcelona has the most gourmet restaurants in all of Spain and the Catalan has already been voted the worlds greatest chef three times by culinary experts.

According to local author Rafael Argullol, Barcelonas mix of sense and sensuality is perfect for attracting curious, entrepreneurial, and ingenious outsiders. Included in that group is German architect Karl Unglaub, 41, who has lived here since 1999. Back then he followed his former teacher in Frankfurt, Enric Miralles, who was known in the city for his visionary modern architecture. But after his sudden death seven years ago, Unglaub stayed on a project manager in Miralles EMBT agency, which is now led by his widow the Italian architect Benedetta Tagliabue.

For Unglaub, Barcelona is more open and international than any German city. The mixture creates the potential for creativity, says the passionate city planner. He admires the particular sensitivity of his local colleagues for how public spaces are treated. One need look no further for proof of the citys tolerance for the unconventional than the spires of Gaudí's Sagrada Familia church resembling the dripping wet sand from a kids castle on the beach. And Unglaub says hes still fascinated by the bubbling life outside on the street.

The 37-year-old fashion designer Markus Lupfer describes Barcelona as being hot blooded and having a happy spirit that fires the citys fun-loving lifestyle deep into the night. The cultural and style Babel is simply amazing, in his estimation. From Germanys deep south, he went to London 12 years ago to study fashion design. He then started his own label there and soon enough, trendy clothes shops were snapping up his final graduation collection. Even rock stars and models were after his patchwork clothes with their unique mix of materials.

Lupfer has been spending more and more time in Barcelona for about a year. He considers the city Londons little sister. Hes now the head designer for the renowned family business Armand Basi for womens wear. His designs were well regarded at Barcelonas twice annual Bread&Butter fashion trade show, which is now an important platform for young urban couture. Lupfer is also looking for an apartment in the citys hip neighborhoods -- especially in the old warehouse district not far from the Santa Maria del Mar church.

Despite their individualism, the two Germans Unglaub and Lupfer are typical examples of the creative class in Barcelona. The city has even developed its own strategy for cultivating for this young, professional European elite. We want to be cool, but not trendy because trends are temporary, says Mario Rubert, whose business cards describe him in both English and Chinese as head of Barcelonas business development marketing.

Barcelona is one of those cities that have been forced to reinvent themselves more than once. Its here towards the end of the 18th century that a sort of Spanish Manchester arose, while the rest of the rather unproductive kingdom was still shaking off the grips of the Inquisition. That helped Barcelona develop a unique bourgeoisie that included sensible merchants and traders, but also eventually artists such as Miró and Dalí.

Design is omnipresent here. The new part of town is based on a grid -- with rounded corners -- developed toward the end of the 19th century. The cobblestones sport ornamentation including snails and blossoms. The street signs are naturally in the Catalan language, since Barcelona is proud of its distinct culture and identity with all of its quirks. We are specialized in diversity, marketing strategist Rubert sums up neatly.

Eight years ago only 3 percent of the population was foreigners. According to the latest census, now some 16 percent of the citys 1.6 million inhabitants are. With an area of 101 square kilometers making it one of Europes most densely populated cities, Barcelona is now home to samba rhythms and African drums, as well as construction workers from Ecuador and computer freaks from Sweden. 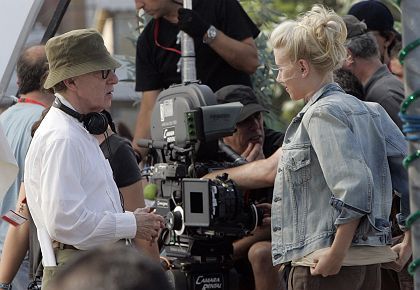 Woody Allen on the set of a film in Barcelona that stars his new cinematic muse, Scarlett Johansson.

The 1992 Summer Olympics set off a new drive to renew the city, which up till then had its back turned toward the sea. Now it embraces the waterfront -- people stroll along a promenade near Europes largest cruise ship terminal, chic restaurants and a yacht harbor, where there were once rusty cranes and rotting industrial sites. Two thirds of the money allotted for the Olympics was funneled into repairing streets, the airport and fantastic architecture. Barcelona finally managed to distance itself from the legacy of the Franco era that placed Madrid as Spains centralized power center above all else.

When that proved to be so successful, the citys leaders seized upon a new excuse to push for further renewal. They came up with the 2004 Universal Forum of Cultures, a kind of world expo for peace, human rights, sustainable development and diversity. The hottest architects from around the world worked along side local talents to build several new buildings. Things every city needs, but would rather hide -- a sewage treatment facility, a central heating station, and a water utility-- were all revamped as stylish and environmentally friendly structures. Torre Agbar, the water utility tower that looks like a gigantic aluminum-encased rocket that glows red and blue at night, has become a new Barcelona landmark.

In the shadow of the 142-meter tall building, the city is undergoing its one of its biggest transformations ever. Some 200 hectares of industrial wasteland in the working-class district Poble Nou are destined to become a thriving digital village. Modern industries such as media, IT, communications, energy and biomedicine will hopefully create around 150,000 new jobs.

The project is called 22@ and it has the backing of all the citys political factions. It will be a massive new biotope for the creative classes. Nearby, the train terminal for a high-speed train to Madrid and Paris is being built. The private owners of the land have to donate 30 percent of the area they renovating, which will then be used by local municipal authorities for apartments, university facilities and public green spaces. Prominent architects are involved, which will hopefully attract even greater interest to the project. For example, the MediaTIC building will have a skin that will change color according to the outside temperature.

Companies both big and small -- from here and abroad -- are lining up. City planners from around the globe are streaming into the 22@ management offices in the midst of the huge construction site to try to learn from Barcelonas example. The citys talent -- those sought-after, creative minds -- are also being intensively groomed by the projects managers. Theyre aware that leading researchers and scientists will only come if they can find top people in their professions in Barcelona.

Since the city is hoping to become one of Europes pioneering centers for biomedicine, the regional government decided with municipal leaders and private companies to create a so-called bio-region. Incubators were set up to help found startup firms. The European Fusion Development Agreement, which is coordinating the EUs contribution to the worlds largest scientific endeavor the INTER fusion project, also happens to be moving to Barcelona.

A quarter of the office space and the streets at the 22@ site are already finished. Classes for communication studies will start in restored brick buildings this September. And in 20 years, if all goes to plan, some 25,000 students from four academic departments will study within the technology district. Many will come from far away places -- but Barcelona hopes they will end up staying for good.

Editor's Note: Check back each day this week for profiles of Europe's Coolest Cities.