One day Brigitte Thygesen received a phone call from the United States. A man wanted to know why "it would be a good idea" to transfer part of his company's production and development department to Copenhagen. The man wanted an answer fast.

A short while later, Thygesen shared her personal experiences with the caller from Cambridge -- Boston's small but important knowledge center. She praised Copenhagen's transportation infrastructure -- which includes Copenhagen's Kastrup International Airport, the "hub of the North" -- and praised other local advangages, such as the flexible labor market, competitiveness, a high level of education as well as the city's quality of life and its cultural offerings.

She had been quick to understand that "it wasn't just economic questions that interested Americans. It was the overall combination." "Can we take a dog?" one manager wanted to know, for example. Or: "Why do polls say the Danes are the happiest people in the world?"

Thygesen moved to America's East Coast to represent Copenhagen Capacity, an unusual, tax-funded marketing agency that acts as a kind of government PR agency designed to attract foreign companies and investors to the Copenhagen area. The government promoters are especially interested in innovative companies that work closely with researchers -- companies active in the fields of biotechnology, medical and communications technology, or food and film production.

One company the agency lobbied was Biogen Idec, one of the world's leading developers of pharmaceuticals. It took about a year for the company to make its final decision. Then the pharmaceuticals giant moved to Copenhagen, beating out competing cities, including Stockholm and Singapore. "It was a big deal," Thygesen remembers.

Some 150 employees from 14 different countries now work in the company's laboratories and factories in Copenhagen, a number which is expected to eventually swell to 400. "We view diversity as a kind of capital," says Thygesen. The 51-year-old political scientist has become Biogen's administrative director and the company's external relations manager. After seven years at the Foreign Ministry and another seven as an ambassador for the city at Copenhagen Capacity, it was "time for something new," she says.

The brand-new plant, a gem of Danish architecture and design, is located in Hillerød just outside the gates of Copenhagen, where it fits snugly into a rolling landscape of pastures and hills. It has become a hub for leading companies from the biotechnology and medical technology sectors over the past 10 years, and it streches across the Oresund Bridge to the coast of Sweden. The industrial zone brings together world-class research and production, and Copenhagen's marketing strategists proudly refer to the area as "Medicon Valley." More than 200 companies already employ 36,000 people there.

These projects combine with a large number of science parks to surround the city like a string of pearls and confirm Copenhagen's reputation as Europe's leading research location. The medical technology sector is active here, as is the communications technology sector which has created 100,000 jobs The young recruits come from 20 universities in the Oresund region, where 142,000 students are enrolled. The region includes populous Copenhagen as well as Malmö, Sweden's third-largest city, just across the Oresund Strait.

"Knowledge, creativity and innovation are Denmark's most important resources for the future," says Deputy Danish Foreign Minister Anne Steffensen, praising her government's efforts. The most recent example is the new Biotech Research Innovation Center (BRIC) science center in the heart of the city. The government has invested many millions of euros to establish Copenhagen as a base for top-level research. BRIC is soon expected to be able to compete with the Massachusetts Institute of Technology (MIT) in Boston on cellular and molecular research, biochemistry and genetics -- no small ambition. Two hundred young scientists are to "tread a new path" here, says BRIC's deputy director, Ulla Brinch, in order to "close the gap between science and the economy." 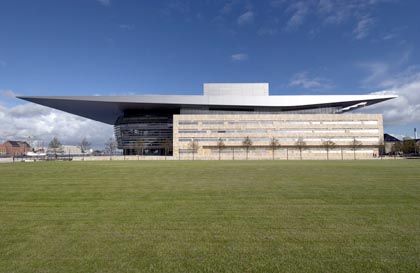 Denmark is relying on this "creative economy" more than virtually any other European country. Out of Copenhagen's residents, 62.5 percent earn their living in knowledge-intensive sectors -- the highest percentage in Europe. The percentage of residents with an academic degree is 32.5, and more than 80 percent speak English.

Greater Copenhagen -- whose population is 1.8 million, a third of the country's total -- is far in the lead in Europe when it comes to registering patents, and it is No. 1 in the field of biotechnology. Copenhagen regularly comes out on top in international studies on competitiveness, quality of life and recreational value.

While the government used to struggle for economic market share, today it is more concerned with gaining more attention internationally. The peaceful home of smorrebrod and Lego is now being labeled a "trend destination" and "cool, cultural and creative" in glossy magazines the world over.

For centuries, life in Denmark -- a country that survived largely on agriculture and fishing -- was about producing economic value out of scarcity. Now extraordinary inventions are placing the former agrarian people at the center of the world stage: with university projects, architects, furniture makers, fashion designers, musicians and film directors. The creative economy has bestowed international glory on the 5.4 million Danes.

Thirty-four-year-old Henrik Vibskov says, "It's a special mood" that lends wings to Copenhagen's creative workers "like a kind of sounding board." And he should know. Vibskov is a visual artist, a filmmaker and the drummer in the hip electro band Trentemöller. But most importantly, he is a fashion designer whose work has met with success in Paris, New York and London.

Vibskov looks relaxed as he sits in his courtyard studio in Vesterbro, Copenhagen's former red-light district. The atmosphere around him is hectic. A dozen tailors, seamstresses, designers and computer freaks scurry about -- his fashion team. The new collection is almost ready; it will be presented in Berlin and Paris. The collection is once more dominated by bold and playful color combinations, "crazy patterns" and clear cuts. Vibskov calls it "a kind of Scandinavian style."

Vibskov Can Do What He Wants

His team is international and he sells his fashion products in 30 countries, in design shops located in cities that include Hong Kong and Honolulu, Moscow and Reykjavik. But he wants to work in Copenhagen, at least for the time being. "It's a different pace here," he says, "a different proximity." The clubs, the night life, the museums and art create spaces of freedom and stimulate the imagination, he says. "I can do what I want here."

It's a certain "form of intimacy," says 28-year-old Stine Goya, referring to the proximity to other artists, painters, photographers and designers. "It inspires me and creates an identity," the young fashion designer says. She hesitates to call it a "big family," but "somehow it is something like that."

Goya's story is as dazzling as Henrik Vibskov's. She quit school early, tried out many possible careers but never finished anything. Then she went to the Central Saint Martins College of Art & Design in London -- the No. 1 address for the new generation of fashion designers. She has worked as a model and a fashion editor. Two years ago, she found her dream job. 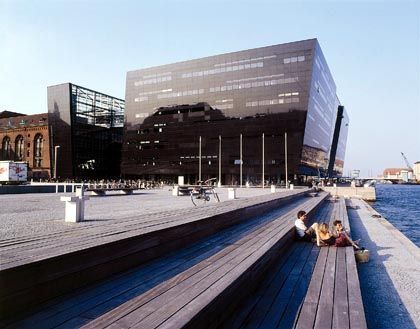 Copenhagen's "Black Diamond," which houses the Royal Library, has become a symbol of the city's cutting-edge design.

She employs eight or nine women who are working on her second fashion collection in a small apartment in Copenhagen's historic city center. The fashion is designed for young women. The choice and combination of colors is bold, but the clothes are also minimalist and sometimes the cut is "unconventional in the Scandinavian way," Goya says. She has her targets set on Copenhagen Fashion Week right now and Paris in the fall.

It's the light that keeps her up north: "You always see people differently -- their differences, the colors." Colors inspire her -- they are what give her and Henrik Vibsov's design creations a special touch.

There are now hundreds of these kinds of small design businesses in Copenhagen and not all of them are fashion designers. Ninety percent of them are run by self-employed people, but they have created thousands and thousands of jobs. Together, they provide the soil for global players to till. Those players have long since arrived in Copenhagen, with multinationals like Max Mara and Dior, Dell and Sony, Triumph and Bayer setting up shop in the Scandinavian bastion of creativity.

"If you want to start something new, Copenhagen is very attractive and flexible," says Flemming Thorup. The 55-year-old studied economics in Denmark and management at Stanford in California. He recently became the co-owner and business director of the software development company 3shape, which develops 3D programs for medical devices such as hearing aids.

When the computer artists set up shop in 2000, there were only six of them. Now there are more than 50 software and hardware designers from 15 countries, including China, the United States, Canada, Peru and places all over Europe. "We're trying to create a creative milieu here," says Thorup. In fact, he says, Copenhagen has recently started to deliver on its promise to offer exactly that. The city has the necessary heterogeneity, thanks to the former hippy paradise Christiania and the rock festival in Roskilde, its jazz festivals, high culture, attractive universities and world-class research. It's a milieu that pulsates and vibrates, not just at night and not just in hip discos or in Nyhavn, the tourist watering hole.

"We can't change the weather," says Thorup. "But we can change the creative environment."