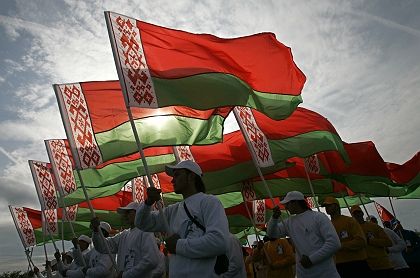 Belarus may be on the cusp of introducing more democracy, but it is doing so at its own pace -- or rather at the pace of President Alexander Lukashenko. This weekend Belarus' leader, known by the likes of Condoleezza Rice as Europe's last dictator, warned that he could still break off a growing dialogue with the West if it failed to recognize next Sunday's parliamentary elections as democratic.

On Sunday Belarus' fractious opposition overcame its divisions and agreed not to boycott the Sept. 28 parliamentary elections despite many doubts about their fairness. Since the mid-1990s Belarus has failed to hold free and fair elections, and in 2004 the opposition was simply shut out of a parliamentary poll. This year around 70 opposition candidates are standing, though many activists still expect the election to be rigged.

"We propose that our candidates carry on to the end while producing evidence of vote-rigging," Anatoly Lebedko of the opposition United Civic Party told a council of groups. "If it turns out that the election is not legitimate, we will ask our followers to protest peacefully."

While Minsk has eased up on repression of the opposition, there is little evidence of a vibrant election campaign. On Friday the Organization for Security and Cooperation in Europe (OSCE), which is sending hundreds of observers to monitor the elections, says the campaign is failing to give voters a clear idea of the issues or candidates. The OSCE said there were no public meetings, no street posters and only a few leaflets distributed. Opposition groups, meanwhile, have complained that they do not have sufficient representation on the election commissions that oversee the vote.

Nevertheless the fact that observers are attending, and that far more opposition candidates have been registered than in previous elections, is a sign that Belarus is at least making an attempt to meet democratic standards. Lukashenko has been making overtures to the West recently, by easing off on repression and releasing political prisoners.

But he has also warned the West against griping about any flaws in the forthcoming vote. "If even this time the elections turn out to be 'undemocratic,' we will cease discussion with them," the president said at a harvest festival on Saturday. "Let's just see how they react. We have blatantly broken our laws to hold an election the way it is understood by the West."

The comments come after Lukashenko gave rare interviews to Western media last week, part of an obvious strategy to tilt westward in the light of deteriorating relations with traditional ally Russia. Moscow has annoyed Belarus by increasing energy prices and even turning off oil supplies briefly last winter. Lukashenko, in turn, has failed to recognize the independence of the Georgian breakaway regions of Abkhazia and South Ossetia, despite pressure from Russia.

Speaking to the Financial Times and Germany's Frankfurter Allgemeine Zeitung last Thursday, Lukashenko appealed to the West to recognize the election. "We want you to accept us, to endorse us and recognize our election," he told the two newspapers. "We do not want to talk to you across the Iron Curtain which you have erected on the borders of Belarus."

European Union foreign ministers last week indicated that sanctions imposed on Belarus after a March 2006 presidential election could be eased if Lukashenko was seen to improve the country's democratic credentials. The 2006 poll was widely condemned as fraudulent. Lukashenko won a massive 82.6 percent of the vote and protests against the electoral farce were violently repressed. Many activists, including the main opposition candidate Alexander Milinkevich, were thrown in jail. The EU and the US late imposed financial sanctions and travel bans on Lukashenko and 40 officials.

Belarusian courts last month released the last of the country's political detainees, and the president -- who has been in power for 14 years has now -- said that he would like to see some opposition candidates win seats in parliament.

However, Lukashenko has suggested that the opposition, which has little support outside the capital, may find it difficult to attract enough votes. On Saturday he insisted the majority of the country's 10 million people supported his regime. "If we had the kind of problems we used to, when we lacked meat and bread and salaries were less than $20, then yes, the people's mood would have been seething. Not all issues are resolved," he told his audience at the harvest festival in the western Vitebsk region. "But people see that they are being tackled, and so they trust the regime."

It is true that the opposition is small and divided, made up of a different groups of urban liberals and nationalists. And although there is no free media or open political debate, Lukashenko has been able to ride a wave of genuine popularity ensured by successive years of economic growth, thanks largely to cheap Russian energy.

Despite Lukashenko's bid to create a more democratic image, however, there are reports that he wants to create a Belarusian political dynasty. He's suggested that his 32-year-old son Viktor could take over as president in the future. Lukashenko junior, currently serving as a presidential advisor and a member of the influential security council, will conveniently have reached the minimum age -- 35 -- to contest the presidency when the next poll is held in 2011.