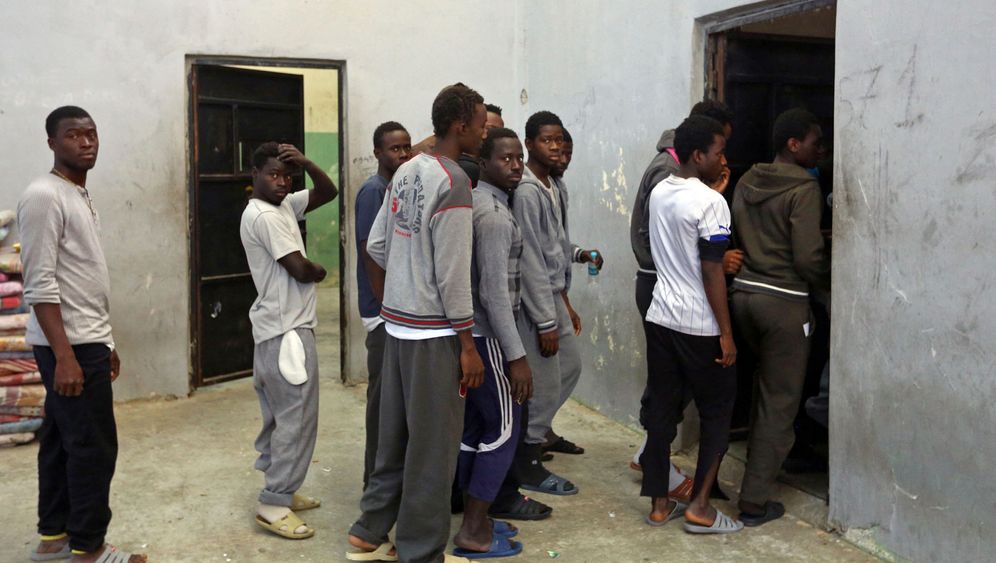 Jonathan Obote's voice drops to a whisper when he describes what it's like to live in a prison in Garabulli, Libya. He lives in a cell with 60 others, penned in like an animal, he says in a moment when the guards aren't paying attention. He sleeps on the ground, he says, is beaten by the guards and often goes hungry.

Not long ago, Obote, a thin 23-year-old Nigerian with a young face but tired eyes, was working with his brother on a construction site in Tripoli hoping to earn enough money to continue his journey to Europe. But then, half a year ago, men wearing masks dragged him from his apartment and took him to Garabulli, near Tripoli, a launching point for refugee boats bound for Italy.

Now Obote is sitting in the prison courtyard, where he is allowed to stretch his legs for one hour a day. Then he returns to his cell, where it reeks of feces and urine - and where the inmates are so desperate that there are frequent fights.

Obote's account is consistent with information collected by human rights activists and diplomats. The aid organization Oxfam has criticized Libya for allegedly locking migrants away in prisons or camps, where they are tortured and raped. In January, the German Foreign Ministry likened the conditions in the Libyan detention centers to those in Nazi concentration camps. An internal European Union report on a camp in Tripoli reads like a description of a modern-day slave trade. It claims that the inmates, mostly Africans, are sometimes "sold back and forth between the camps."

Nevertheless, the EU is now doing all it can to prevent the migrants from putting out to sea from Libya, thereby ensuring that they end up in these Libyan prisons. Two years after Chancellor Angela Merkel's famous words, "We can do it," Europe is sealing itself off again. If European leaders have their way, Africa could soon look like the Balkans: a continent filled with fences and barriers designed to prevent migrants from continuing their journeys to the north.

At their refugee summit in Paris last Monday, French President Emmanuel Macron and Chancellor Merkel reintroduced an old concept, whereby requests for protection would be reviewed in African countries like Niger and Chad. Former British Prime Minister Tony Blair failed with a similar proposal in 2003, as did former German Interior Minister Otto Schily.

At first glance, though, the concept seems to make sense. If refugees and migrants could submit asylum requests in Africa, they would no longer be forced to risk their lives in the attempt to reach Europe. They would no longer board overcrowded boats operated by traffickers, nor would they end up in Libyan camps.

But the plan is virtually impossible to implement. Who would build and operate the reception and selection centers outside the EU? Poor countries like Niger and Chad lack the resources, as does the overloaded United Nations Refugee Agency. This means that European officials would have to be sent to Africa.

But Europe isn't even capable of quickly processing asylum requests in Greece and Italy. As part of their refugee agreement with Turkey, EU member states pledged to review asylum requests within days. Those whose requests were denied were to be immediately returned to Turkey, while all others would be distributed around Europe. But many Syrians, Afghans and Pakistanis have been stuck on Greek islands for the last year and a half, due to delays in the processing of their requests.

There is nothing to suggest that this process would be any easier in Africa. The numbers would likely grow even larger and thousands of asylum seekers would find themselves stuck on the edge of the Sahara, waiting for their applications to be processed. The EU would be forced to open camps and provide for them. But even if Europeans miraculously managed to establish legal procedures in Africa, what happens after that is still unclear.

Asylum seekers whose applications are approved would be permitted to travel to Europe. But some EU member states are already refusing to accept more refugees. In the past two years, only a tiny fraction of the 160,000 migrants originally slated to be distributed among other European countries have actually left Greece and Italy. Negotiations over a permanent distribution mechanism have ground to a halt.

Nothing More than an Illusion

Dimitris Avramopoulos, the EU commissioner for migration, home affairs and citizenship, appealed to member states last week to increase their efforts to resettle refugees and migrants from Egypt, Libya, Niger, Ethiopia and Sudan. Europe has "the legal and moral obligation to provide protection to those who truly need it," he wrote in a letter to German Interior Minister Thomas de Maizière.

The situation is even more complicated for those asylum seekers whose applications are denied. Every applicant has the right to contest the decision in court. But in which court in Chad would asylum seekers lodge their appeals?

Besides, most of the people who currently traveling via the central Mediterranean route are not civil war refugees, but young men from Nigeria, Guinea or Bangladesh who are looking for work. Their prospects of achieving asylum are slim, and they would most likely continue trying to reach Europe by sea.

Europe's seemingly attractive plan, in other words, is nothing more than an illusion. In the run-up to German parliamentary elections on Sept. 24, Merkel wants to create the impression that she has the refugee crisis under control. And Macron wants to portray himself as Europe's savior. But the truth is that Europe has already decided to seal itself off. Italy is pushing ahead with its plan to close down the Mediterranean route and Austria is shutting down the Brenner Pass. Merkel is the main beneficiary of these actions, because they enable her to remain the refugee chancellor, even as borders in the south are being sealed.

The agreement with Turkey has ensured that very few people now make it across the Aegean Sea to Europe, and even those who do are usually stuck in Greece. Now Merkel is trying to create a similar project in Africa, by essentially shifting Europe's external borders to North Africa. Ultimately, however, cooperation with African countries could prove to be even more difficult than with Turkey.

In Libya, Europe must deal with two opposing governments and countless militias. The EU supports the weak unity government of Prime Minister Fayez Sarraj by sending it millions of euros, so that it will stop migrants from crossing the Mediterranean while Italian warships ensure that the Libyan coast guard forces refugee boats to return to land. Most private aid organizations have been forced to abandon their efforts to rescue refugees.

Italy also supports an agreement between the unity government and two Libyan militia groups, Brigade 48 and Al-Ammu. Until recently, the two groups controlled the migrant smuggling trade from western Libya to Europe, but now they are being paid to prevent boats from putting out to sea.

In taking these measures, Europe is placing the protection of its external borders in the hands of criminals - a move that is both morally questionable and strategically unwise, because it makes Europe susceptible to blackmail. Most of all, though, the humanitarian situation in which these migrants find themselves is likely to become even more desperate. The vast majority of those who arrive in Libya lack the money necessary for a return journey. What, though, should happen to the people in the camps?

Still, the strategy has been a success if one looks only at the numbers. After reaching a record high in June, the number of crossings has now declined, with August seeing 87 percent fewer migrants reaching Europe than in August 2016. As a result, the number of drownings has also declined.

The drop, though, is likely only to be temporary. When one route is closed, migrants quickly find a new one. Crossings from Morocco to Spain are now increasing, for example, and within Libya, migrant smuggling operations could shift to the eastern part of the country, which is not controlled by the Sarraj government.

Security experts also fear that the militias could use the money they receive from Europe for the fight against the Sarraj government. Europe would then be fueling the Libyan civil war, and migrant smuggling would once again thrive in the resulting absence of government control.

In recognition of this possibility, Italy and Germany are also seeking to cut off the migrants' path to the Mediterranean by establishing an EU border protection mission on the southern Libyan border. The European Commission approved €46 million ($55 million) for the program in late July and German Defense Minister Ursula von der Leyen recently presented Niger's army and police force with 100 flatbed trucks, 115 motorcycles and 55 satellite telephones.

'Inconsistent With Our Political Promises'

The border between Libya and Niger, though, is more than 340 kilometers (211 miles) long, passes through the Sahara Desert and is almost impossible to patrol. Libya's southern border with Chad is almost three times that long. It seems unlikely that a few EU border guards would be able to make much of a difference.

Ultimately, migration can only be stopped if the situation in the migrants' countries of origin improves significantly. Yet even now, a handful of EU member states are seeking to convince the European Council to cut the amount of development aid in the 2018 budget by 90 million euros. In a letter to the current Estonian council president, Manfred Weber, floor leader for the center-right European Peoples' Party in European Parliament, wrote that he was "astonished" by the proposal. Instead, he argued that Europe must "confront the causes of the migration crisis" and that reducing aid spending was "inconsistent with our political promises."

Most experts agree that Europe needs a fundamentally new migration policy. Political consultant Gerald Knaus, who helped devise the EU-Turkey deal, has doubts as to whether the same model can be applied to North Africa. Instead, he says, the European Union should conduct asylum procedures in Italy that take only a few weeks in addition to signing agreements with the countries of origin so that those who are not entitled to asylum can be sent back home quickly.

In parallel, the EU should create legal paths to Europe for refugees and migrants, Knaus says. It could support resettlement programs by the UN refugee organization, issue work visas and facilitate family reunification. That would be a welcoming policy that makes sense.