German politicians on Tuesday expressed deep satisfaction. Volker Kauder, floor leader of Chancellor Angela Merkel's conservatives, said he was delighted by the "clear signal" it sent to the financial markets. Birgit Homburger, floor leader of Merkel's coalition partners, the business-friendly Free Democrats (FDP), expressed pleasure that speculators will finally be asked to pay their share of costs generated by the financial crisis. And Sigmar Gabriel, head of the opposition Social Democrats (SPD), said that measures passed on Tuesday in Brussels represented a success for his party.

Everyone was patting themselves on the shoulder. Finally, the financial gamblers were being forced to cough up.

European Union finance ministers, meeting in Brussels on Monday and Tuesday, put together a package of new regulations aimed at reining in the financial markets -- a collection of measures that required a last-minute compromise in Berlin within Merkel's coalition government. Hedge funds are to be brought under greater control and naked short-selling -- a particularly risky form of betting on a market's downward trend -- is to be reduced.

On Tuesday, Germany's market regulator BaFin announced a ban on naked short-selling of euro-zone government bonds and of shares in 10 of Germany's biggest financial institutions. It also banned naked credit default swaps on euro-zone government bonds -- in other words, taking out credit default swaps (a kind of insurance that protects investors against falling bond prices) on bonds that one does not own. The ban came into effect at midnight on Tuesday and will run until March 31, 2011.

In addition, Merkel's conservatives finally came to an agreement with the FDP on backing an international tax on financial market transactions. The deal is likely to improve chances that the Berlin opposition on Friday will throw its support behind the €750 billion package agreed on by EU governments last week as a response to Europe's growing sovereign debt crisis and to prop up the euro.

Politicians of all stripes sought to portray the Tuesday agreements as a victory for the European public. Finally, so went the message, the greedy speculators were being made to pay. Finally, the politicians have regained the upper hand. Finally, the taxpayers will no longer be the only ones paying for the excesses that resulted in the financial crisis and ensuing economic and sovereign debt crises. Banks, financial institutions and that omnipresent villain, the speculator, are being asked to pay their share.

But it's not quite that easy. Not only are there doubts about the efficacy of the instruments chosen to rein in the financial markets. But there are also questions as to whether the initiatives are really intended to be effective -- or whether they are simply meant as a way to placate voters.

The new rules on hedge funds are one example. Finance ministers are praising the stricter regulations they have come up with: German Finance Minister Wolfgang Schäuble said that a "regulatory loophole" has finally been closed. But the new agreement represents only a minimal change. In the future, fund managers will be required to register their activities in Europe. Funds from other countries will likewise have to register with regulators. In addition, hedge fund managers would have to divulge their investment strategy.

But it remains unclear whether the regulations will go into effect as currently conceived. The European Parliament must first have its say. British opposition to the new hedge fund regulations could ultimately result in the Parliament watering down the new rules.

The ultimate success of the proposed international financial tax is likewise uncertain. The German government has now agreed to support the introduction of such a levy on bank profits or on all financial transactions. Merkel has pledged to push the idea at the G-20 summit in June.

Merkel's coalition partners, the FDP, were eager to give the impression that, despite long-standing opposition to the idea, they had not given in to pressure from Merkel and from the opposition. Senior FDP politician Peter Altmaier insisted on Tuesday that it was the SPD which had aligned itself with Merkel's government, and not the other way around.

Merkel, after all, has always shown sympathy for a transaction tax. The idea was even included in her campaign platform last autumn. But then she backed away from it, citing concern from the International Monetary Fund and a lack of support from Britain and the US.

As recently as Sunday, during an appearance before the German Confederation of Trade Unions, she voiced doubts about the idea. Supporting such a tax, she said, "would cost me nothing." But in four years, she said, she would be accused of not having been able to push it through on the international stage. Now, just days later, she has backed such a tax. One wonders with how much energy she will pursue it against doubts in London and Washington.

Her finance minister was even more tepid in his support in Brussels. The Europeans, he said on the meeting sidelines, would "likely" push for such a tax. But there are "serious doubts" as to whether it will ever be introduced globally. A purely European version, he made clear, would not be enough. "It makes no sense to introduce rules when one knows beforehand that they won't work," he said.

Merkel was hardly more optimistic in her comments to Christian Democrat parliamentarians in Berlin. Participants said she explained that there were some economically powerful countries that "don't want to cooperate at all." Still, she said, she would "kick up a fuss" if need be.

Even the ban on naked short-selling and on naked credit default swaps seems to some more like an effort to create headlines than to seriously reform financial markets. The move is intended to eliminate massive investor bets that bonds issued by troubled European countries will continue plummeting. Germany's market regulator BaFin cited the market's recent "extraordinary volatility" and said in a statement announcing the ban that "massive short selling" of government bonds and naked credit default swaps "would have as a consequence further excessive price movements."

But some saw in the ban yet more proof that Europe was having difficulties coming to terms with the sovereign debt crisis that has rocked the European common currency in recent weeks. "The German ban seems to be a bit of flailing," Marc Chandler, head foreign exchange strategist for the New York investment firm Brown Brothers Harriman, said according to the Associated Press. "It appears to be half-baked and not really thought out, and plays into market doubts about European policymaking credibility."

German politicians were doing their best on Tuesday to secure political gain from the decisions made in Brussels. FDP General Secretary Christian Lindner, who just on Monday referred to the financial transaction tax idea as a "stun grenade," was likely encouraged to support the measure by the negative press his party was receiving. "The impression was growing that everyone wanted to regulate the markets except for us," an FDP parliamentarian said on Tuesday.

Even the opposition Social Democrats were at pains to present the transaction tax agreement as a victory for their party. The SPD has indeed long been in favor of such a measure. But the party, which was in government for 11 years before being voted into the opposition last September, did very little to regulate the markets during its time in power. Peer Steinbrück, who preceded Schäuble as finance minister, only discovered the issue as a useful campaign tool just a few months before the election.

Now, though, it appears that the SPD is unwilling to rely on Merkel's government to apply the necessary international pressure. Gabriel says he has talked with other center-left leaders in Europe. Should the financial tax lose momentum, he says, they want to pursue a Europe-wide citizens initiative. 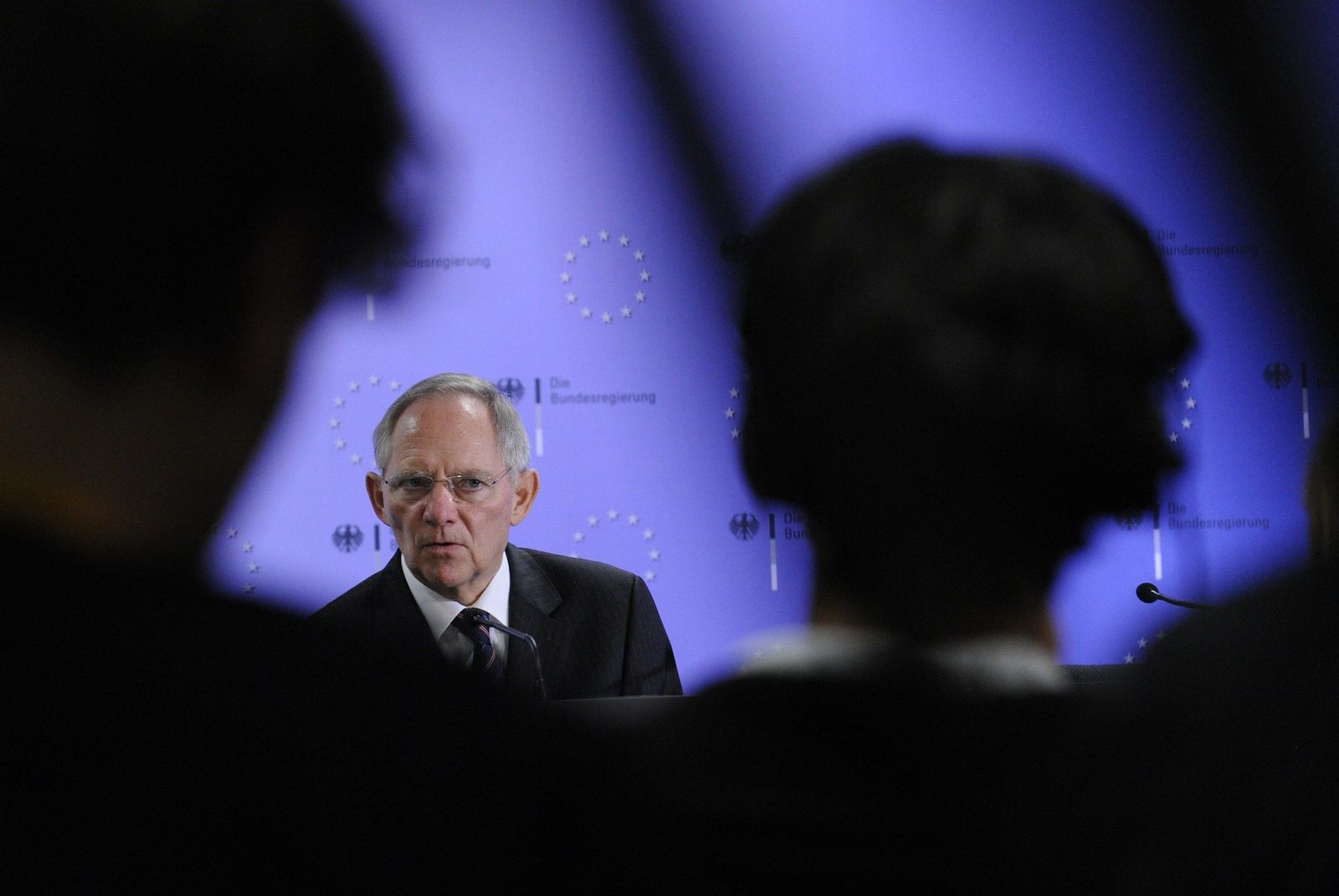 German Finance Minister Wolfgang Schäuble made it clear that he's no fan of a financial transaction tax, even though his government supports it.