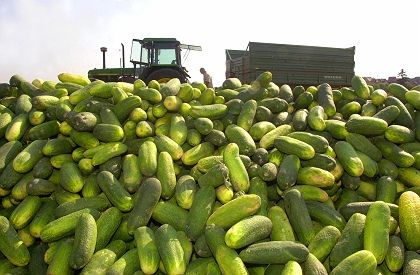 According to European Commission Regulation No. 1277/88, if a cucumber bends more than 10 millimeters per 10 centimeters (0.4 inches per 4 inches) in length, it cannot be categorized as "class one" and may therefore only be sold as a second-rate cucumber. But who wants to buy one of those? Most second-rate cucumbers -- at least according to conventional wisdom -- never make it to market.

But in this era of skyrocketing fuel prices, Mariann Fischer Boel, the EU's Danish agricultural minister, thinks it prudent to bend a few regulations. She thinks the EU should make it easier for the fruits and vegetables to reach the market by using a new classification system -- but "with some sort of label for use in cooking."

Sellers and consumers, she says -- rather than EU regulators -- should decide on the standards they want for the food they buy. If consumers want to pay less for supposedly inferior produce, so be it.

"This makes more sense than just throwing them away," Fischer Boel added in a statement released from her office Monday, according to the BBC.

The Right Size and Shape

Since the 1980s, the EU has had rules in place on the appearance, weight, size and other features of 36 fruits and vegetables affecting 75 percent of the cross-border trade in such products.

Fischer Boel has proposed dropping the quality-control requirements on 26 of the 36 products and allowing food suppliers to make decisions on what they make available to customers themselves, provided they properly label the produce.

"I don't think the size of the cucumber is so important for consumers," she told the Associated Press. "If you can buy at cheaper prices in a high-price market, I think that should be possible."

Fischer Boel believes passing these measures would "improve the quality of life" for many people, but her ideas aren't popular with everyone. Seventeen countries have voiced their opposition to the changes, claiming that having two categories of produce might confuse consumers.

Horst Seehofer, Germany's federal agriculture minister, is one of the opponents. "The marketing standards for fruits and vegetables are based on a wide consensus between businesses and consumers," he said in a statement released by his office. "For that reason, the current system should continue to be used."