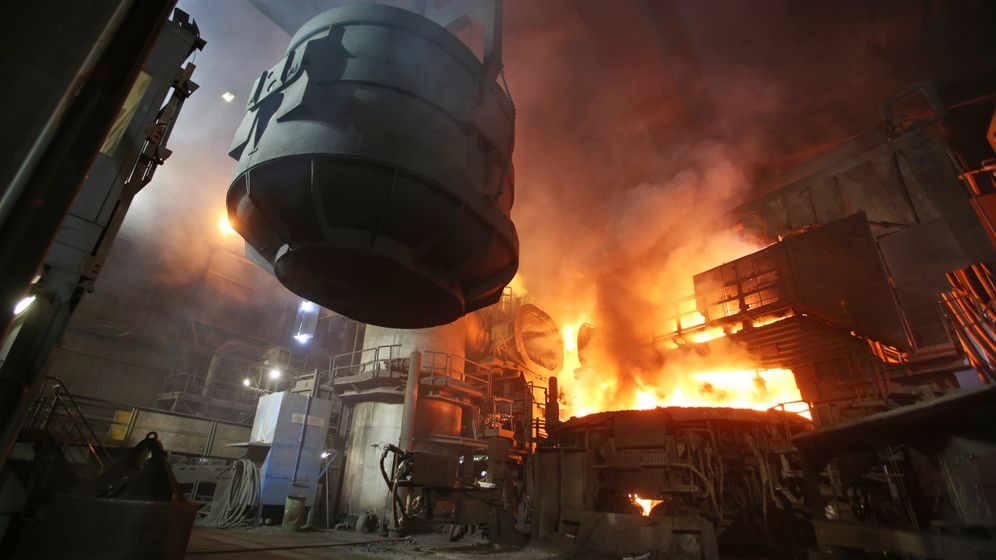 The audience was small and exclusive, which helps explain why little has emerged thus far of what European Energy Commissioner Günther Oettinger said at the Hotel Stanhope in Brussels on May 6. It was enough to cause something of a stir among his listeners.

For the European Commission and for Competition Commissioner Joaquín Almunia, Oettinger said during a dinner event, it is clear that price concessions for energy-intensive companies in Germany amount to an inadmissible subsidy. In the best-case scenario, he said, the Commission would ban such subsidies. But, he added, the worst case could see Brussels demanding that such companies pay back the money they had saved as a result of the discounts they have received.

Competitors and neighboring countries had filed an official complaint about these benefits with the European Commission, prompting the EU competition authority to launch an investigation. The German commissioner had sought to assure industry representatives that the process was only just beginning and that the outcome remained unclear.

That, though, seems to only have been partly accurate, which helps explain the current agitation. The scenario Oettinger outlined at the Brussels dinner is a horrifying one for parts of German industry and for the government in Berlin. The prospect of having to repay several billion euros is certainly a daunting one. Even worse, though, is that the competitiveness of entire industrial sectors would be put at risk. Also at stake is the Renewable Energies Act (EEG), a central component of Berlin's shift away from nuclear power and toward green energy, also known as the Energiewende.

Since 2000, Germany has used the EEG to promote the expansion of renewable forms of energy. To ensure that the construction of expensive solar and wind farms is worthwhile for private individuals and investors, they receive a guarantee that the electricity they produce will be purchased at a fixed price for a period of several years.

The costs of start-up financing for green energy and the compensation for expansion of the power grid are added to customers' electricity bills in the form of a special tax. The entire subsidy system is supposed to come to an end when green energy becomes competitive. That, at least, is the theory.

But the reality is different. No longer can one simply describe the tax as a way to get renewable energies off the ground. Indeed, following Berlin's decision two years ago to shelve nuclear energy and accelerate the expansion of renewables, the EEG has become a giant redistribution machine.

Owners of wind and solar farms were paid about €14 billion ($18 billion) last year alone. This is the difference between the guaranteed EEG price and the proceeds actually achieved on the market for the electricity they fed into the grid. Experts with the Institute of Energy Economics at the University of Cologne estimate that consumers will have to pay more than €100 billion by 2022 for renewable energy facilities that have already been installed. Of the 28 cents household customers pay per kilowatt-hour of electricity today, 5.28 cents already applies to the EEG levy, and that figure is growing.

There are many reasons for the cost explosion. Contrary to earlier forecasts, solar and wind farms are a long way from being able to produce energy at the prices possible in coal-fired or nuclear power plants. There are also high costs associated with grid expansion and electricity storage facilities -- both necessary for a system more reliant on renewables -- as well as for backup power plants, which take up the slack when the sun isn't shining or the wind isn't blowing. In addition, the German government failed to define upper limits for solar energy, an expensive form of energy that is inefficient in a country like Germany, with its relative lack of sunshine.

Even more vexing, consumer advocates and Green Party politicians like energy expert Bärbel Höhn have been saying for months, are the special provisions that enable "supposedly energy-intensive companies" to exempt themselves from the EEG levy and grid charges.

The exceptions, introduced in 2003, were intended primarily for industries and companies that consume large amounts of energy and compete internationally. On the international market, they face off against competitors who can buy electricity in their home countries at significantly lower prices. This applies, in particular, to sectors like steel, aluminum and chemicals.

But as costs have risen, what was once a reasonable tool has become a farce. Because the German government lowered the limit at which a company is considered energy-intensive from 10 gigawatt-hours a year to only 1 gigawatt-hour a year, large corporations are now not the only ones able to enjoy the exemption. Discount markets, furniture stores and retail chains have combined the electricity consumption of their branches nationwide to qualify and submit exemption applications.

The number of company sites with an EEG exemption has jumped from 979 in 2012 to the current figure of 2,245. According to a parliamentary inquiry submitted by the Green Party, applications for exemptions from grid charges more than doubled, from 1,600 in 2011 to 3,400 in 2012. This has allowed companies and larger corporations to save close to €5 billion.

Consumer advocates, Greens and small and mid-sized business owners unanimously complain that small companies and household customers are expected to make up the difference. "They are the ones ultimately footing the bill," says Höhn.

The exceptions are also vexing to European Competition Commissioner Almunia, who even sees them as a deliberate effort to influence European competition. In an internal statement on the grid charges, the legal service of the European Commission noted last October that "German lawmakers are deliberately favoring certain energy-intensive companies, which threatens to distort competition and is apt to obstruct trade between member states."

Consequently, a few weeks ago, the Competition Commission introduced formal proceedings against Germany, which it suspects of providing "inadmissible subsidies." In a first step, the case revolves around company exemptions from grid charges, Oettinger told his small audience in Brussels. This amounts to about €800 million in 2013. According to Oettinger, companies and the German government are likely to see sanctions from Brussels this year.

An Inopportune Time for Berlin

At the same time, Almunia's competition experts are looking into an expansion of the case to include all EEG exemptions for German companies. Although a decision hasn't been reached yet, the step seems likely if Germany fails to respond by amending the EEG. In talks with representatives of the German Economy Ministry, Brussels officials have threatened to demand repayment of the money saved as a result of exemptions.

The foray comes at an inopportune time for the German government. The Energiewende has stalled, as it becomes clear that ambitious schedules for the construction of energy storage systems and offshore wind farms cannot be met. At the same time, the costs of green electricity are skyrocketing.

"Should Brussels now force German companies to fully or partially repay the relief resulting from the EEG levy and grid charges, industry acceptance of expensive green energy subsidies and the transformation of the energy supply would be over once and for all," says Joachim Pfeiffer, the economic policy spokesman for Chancellor Angela Merkel's conservatives. In addition, says Pfeiffer, energy-intensive industry, which plays an important role in the German industrial landscape, threatens to be "driven out of the country." The controversial EEG, with its billions in subsidies for green electricity, could hardly survive in its current form.

The European Commission and Energy Commissioner Oettinger would likely welcome such a development. They have long advocated the Europeanization of energy policy without a separate path for Germany. They believe that constantly rising energy prices could provide the impetus for such a move.

European Commission President José Manuel Barroso shocked EU leaders at the summit meeting last week when he mentioned a few numbers. While electricity prices have stagnated in the United States since 2005, he said, they have gone up by an average of 38 percent in Europe. Barroso warned that the competitiveness of European industry is in jeopardy. In contrast to past speeches, Barroso hardly mentioned climate change at all.

Oettinger hopes that a deep-seated reform of the EEG will follow closely on the heels of German elections this fall. "The pointless misallocation of funds must be brought to an end," he says. A chart prepared by a research institute and handed out at the EU summit identifies Germany as Europe's most expensive producer of wind energy. Countries like Spain, Greece and Italy have natural advantages in the production of solar energy, which the energy commissioner believes should be exploited.

He wants a uniform, Europe-wide pricing and conveyance system, together with transnational energy grids that transport electricity to where it is most needed at any given time. Countries like Poland and the Netherlands are constantly complaining about the fact that, while they benefit from free German green electricity on days with abundant sun and wind, they are required to keep expensive power plant capacities in reserve at the same time.

Within the Commission, Oettinger argues that the sanctions against grid charges and the EEG should not be applied prior to the federal election in the hopes that changes will come soon afterward. "The retroactive loss of electricity subsidies would be life-threatening for many companies," he says.

Judging by Oettinger's remarks to the industry representatives at the Hotel Stanhope, his colleagues in Brussels are unlikely to be impressed by such arguments for long. 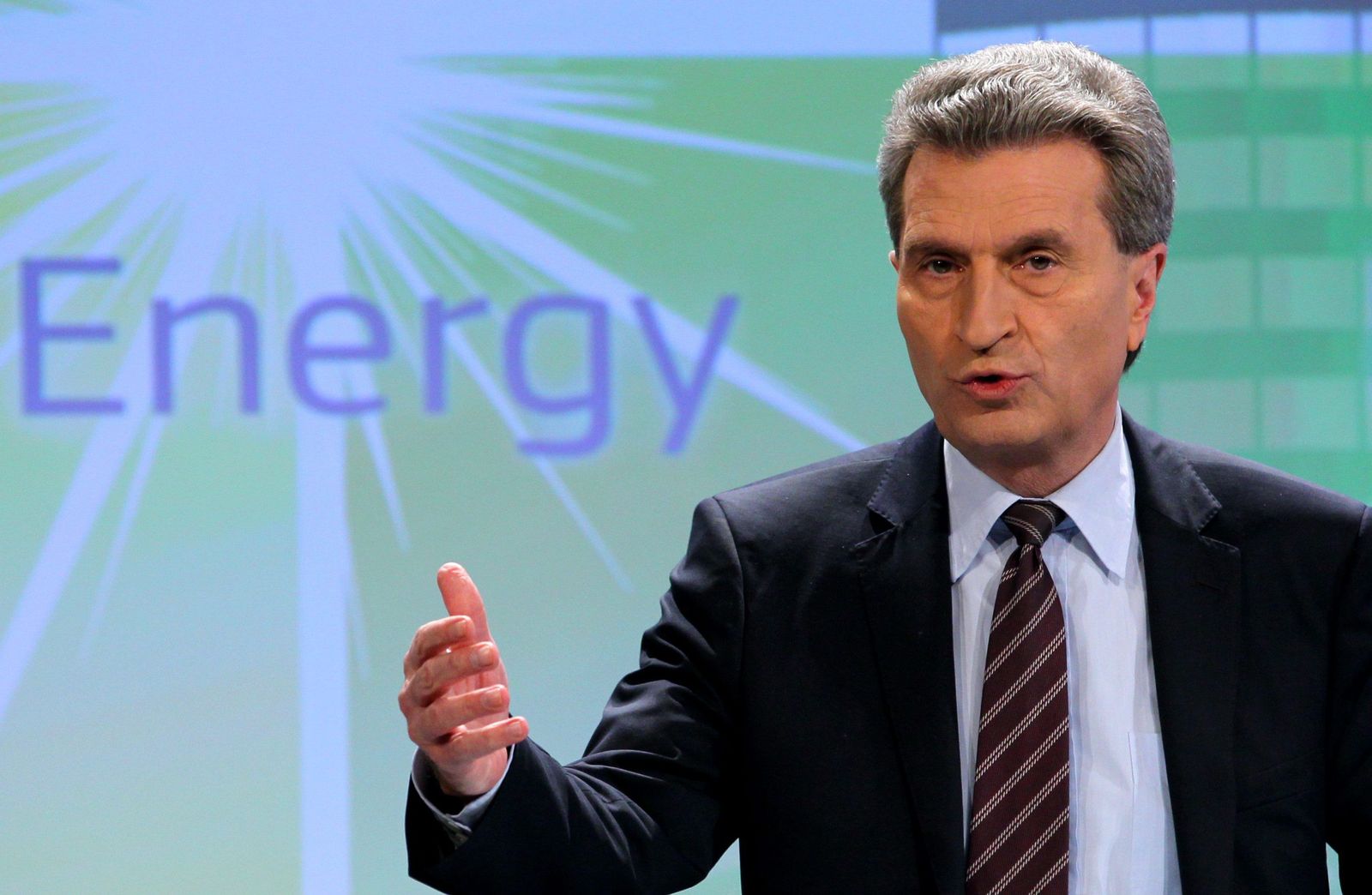 German Energy Commissioner Günther has warned Berlin that painful penalties might be on the way.