Several European leaders had already announced that they would stay away from European Football Championship games scheduled to be played in Ukraine. On Thursday, virtually the entire European Union leadership followed suit.

A European Commission spokesperson in Brussels indicated that all 27 members of the Commission would refrain from traveling to Ukraine during the tournament due to the treatment of imprisoned ex-Prime Minister Yulia Tymoshenko. Rather than a boycott, the move is a signal "that we are not satisfied with how Tymoshenko is being treated," the spokesperson said. The French news agency AFP and Ukraine's Interfax are reporting that the same message was delivered by an EU delegation on Thursday in Kiev.

Also on Thursday, European Council President Herman Van Rompuy announced that he too would be staying away from tournament co-host Ukraine during the football event. "The president is not happy with how the situation in Ukraine is developing," his spokesperson said. "As such, he will not travel there."

The announcements represent the latest ratcheting up of international pressure on Kiev over its handling of the Tymoshenko case. The former opposition leader was sentenced to seven years behind bars last October on charges of abusing her position when she was prime minister -- a verdict the West widely sees as being political in nature. Since being imprisoned, Tymoshenko has suffered a herniated disk, though has refused medical help in Ukraine for fear of being poisoned. At the end of April, she began a hunger strike after she was forcibly taken to hospital and, she claims, beaten on the way.

Responding to the latest threats of political boycott, the Ukrainian Foreign Affairs Ministry issued a forceful statement on Thursday stating that it "considers attempts to politicize sporting events, which for ages have played an important role in the process of establishing inter-state understanding and unity, to be destructive."

"Calls to boycott the championship will mean in practice undermining the image of this grandiose sporting event and will harm the interests of millions of ordinary Ukrainians who vote for different parties or who are not interested in politics whatsoever," it continued. "Those who strive to make a target out of EURO 2012 neither facilitate the reform of the Ukrainian judiciary nor help strengthen democratic institutions and the rule of law in Ukraine." The Foreign Ministry said a successful hosting of the championship would "become a victory not for certain political actors, parties or ideologies but rather for all Ukrainians and Poles, while failure would be a loss for millions ... and would undermine (European football organizing body) UEFA's determination to broaden the geography of big football beyond the borders of Western Europe's prosperous states."

"The attack on this big dream undermindes not only the chance of Poland and Ukraine, but of all members of the socialist camp," the statement read.

Thursday's Commission announcement came after Commission President Jose Manuel Barroso indicated earlier in the week that he would not attend matches in Ukraine. The governments of Belgium and Austria have done the same.

German leaders have also heaped pressure on Kiev. In late April, German President Joachim Gauck announced that he was cancelling a planned trip to Ukraine for a previously planned meeting of European heads of state, a move that several other European leaders have since followed, most recently the president of Romania on Thursday. Gauck also indicated that he would not attend European Championship games in Ukraine, despite the fact that the German national team is playing all three of its group stage games in the country.

On Monday, SPIEGEL reported that Chancellor Angela Merkel was considering asking her entire cabinet to stay away from the event. In an interview with the daily Kölner Stadt-Anzeiger on Thursday, however, she said that she had not yet decided whether to travel to the country or not. "Much more important than my travel plans is that we must now do everything possible to see that Yulia Tymoshenko gets the proper treatment for her medical problems as soon as possible," Merkel told the paper.

Merkel also reiterated Germany's long standing offer to provide medical treatment at the Charité hospital in Berlin, an offer that Kiev has so far refused. Her foreign minister, Guido Westerwelle, said on Thursday that Ukraine's pending association agreement with the European Union was in danger as a result of the treatment of Tymoshenko. "We are in agreement with our partners in the European Union that the EU association agreement with Ukraine will not be ratified as long as the rule of law in Ukraine does not develop satisfactorily," Westerwelle told the daily Rheinische Post.

Still, Westerwelle is not a fan of growing calls for a boycott of tournament matches in Ukraine, arguing that lines of communication with Kiev must remain open. Despite the growing international condemnation, tournament co-host Poland has likewise come out against a boycott of the games in Ukraine. Speaking to reporters in Warsaw, Polish Prime Minister Donald Tusk said that he does not support calls for leaders to shun Ukraine.

"It is with pain that we view the problems of our neighbors," Tusk said. "I have appealed multiple times to the authorities in Ukraine not to let politics ruin this national celebration and nothing will affect our determination to fight for human rights and alleviate the situation of Yulia Tymoshenko." 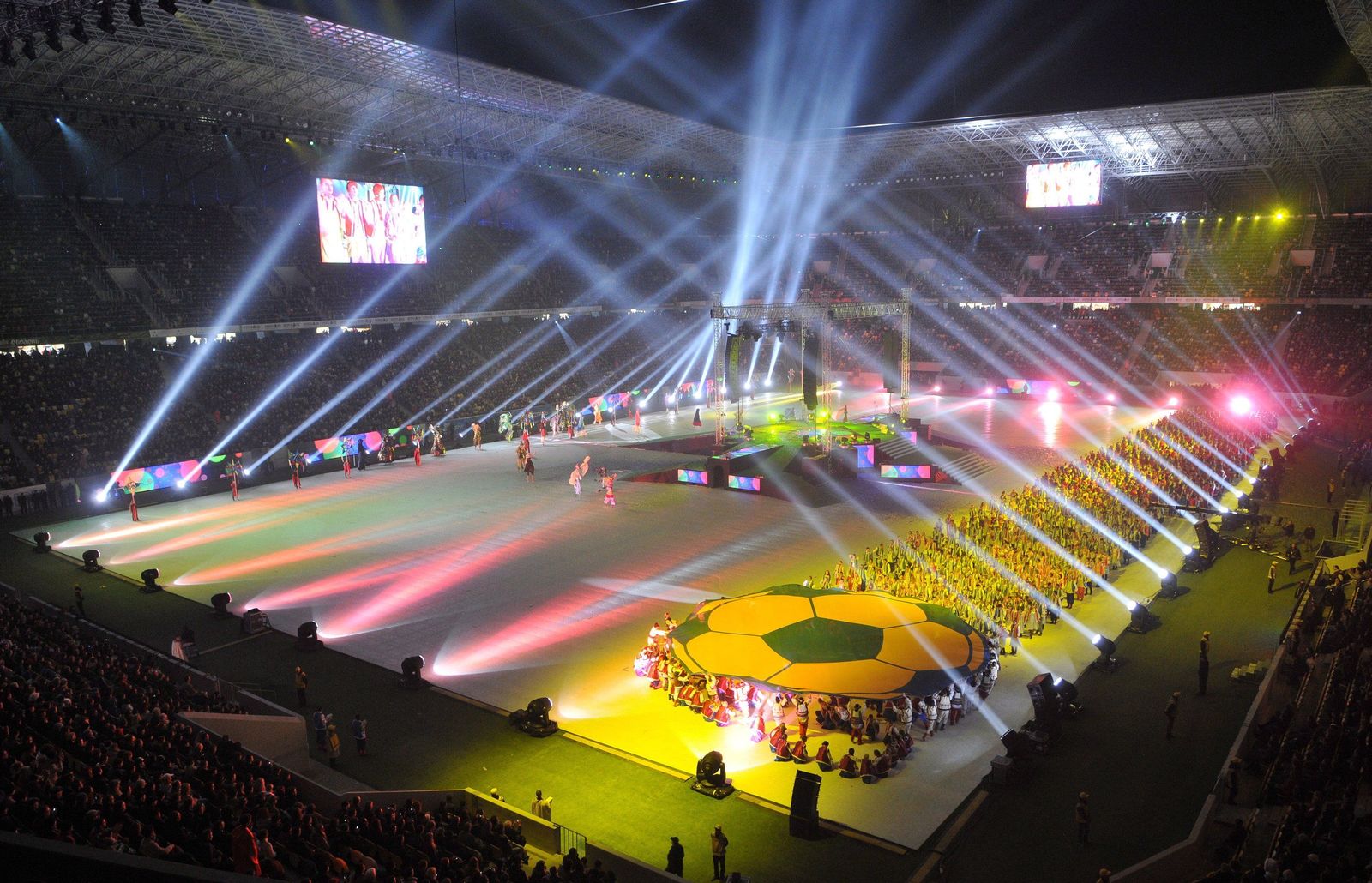 Ukraine is under pressure: The stadium in Lviv where European Championship matches are to be played was inaugurated last October.