European Union leaders have called for action against a controversial constitutional amendment passed on Monday by right-wing populists in Hungary, which opponents say threatens democratic values.

"These amendments raise concerns with respect to the principle of the rule of law, EU law, and Council of Europe standards," said a joint statement issued on Monday by European Commission President José Manuel Barroso and Thorbjorn Jagland, the secretary general of the human rights watchdog the Council of Europe. Both bodies plan to further examine the legislation, the statement continued.

The vote has also created additional burdens for relations between Germany and Hungary. In a meeting in Berlin on Tuesday with Hungarian President János Áder, German government sources said that Chancellor Angela Merkel spoke out critically of the constitutional amendment and called on the government in Budapest to use the new two-thirds majority rule responsibly. The chancellor also said Hungary must take the concerns of its European partners seriously.

German Foreign Minister Guido Westerwelle also urged the protection of democracy. "The European Union is a community of values," he told reporters in Brussels on Monday. "That means not only written law is decisive but the practice on the ground. It is important that every country in the European Union, including Hungary, understands ... that the independence of the constitutional court is crucial."

European Parliament officials said on Tuesday that the EU must look into the widely condemned legislation. Prime Minister Viktor Orbán's "government doesn't want to apply European principles and values," said Guy Verhofstadt, head of the Liberal parties' caucus, who called for a formal investigation and possible sanctions against Hungary.

Washington and Human Rights Watch also expressed concerns on Monday that Orbán and his conservative Fidesz party, which holds a two-thirds majority in Hungary's parliament, are systematically limiting democratic rights with their fourth amendment to the new constitution since it took effect just over a year ago.

Lawmakers in Budapest overwhelmingly approved a package of constitutional changes on Monday. In addition to tightening laws regarding election campaigns, education, homelessness and family rights, the amendment severely limited the influence of the country's constitutional court.

The court had previously struck down policies included in Orbán's Fundamental Law, as his new constitution is called. But Monday's amendment stipulated that none of the court's decisions made between 1989 and 2011 -- the time before the new constitution came into effect -- could be used as precedents in future rulings.

The last constitution was based on a communist-era document rewritten in 1989 as Hungary became a democracy after the fall of the Iron Curtain. The constitutional court has used it to reject certain controversial elements of the new Fundamental Law, but Orbán argues that Hungary must break from its communist past.

Opposition politicians in Hungary have accused European Commission President Barroso of being too lenient when it comes to Orbán's blatant disregard for democracy. They allege that this has to do with the fact that both the head of the EU executive and Orbán belong to the conservative European People's Party (EPP).

"After the fall of their old regimes, few formerly communist countries simply entered into some kind of (Western) paradise. Most lurched back and forth through dramatic economic and political changes that often benefited those who had been in power before. Hungary has been hit particularly hard by this chaos, and breaking free of it is a legitimate and understandable desire."

"But the way in which Orbán and his government are attempting to build a new Hungary -- by setting it back into a sort of sacred, millennium-old tradition -- is irreconcilable with the principles for which the young Orbán once fought. … For whatever reason, Orbán left this path long ago. He no longer trusts the free play of democratic forces, and instead relies on unfettered power."

"Democracy thrives on the painstaking art of compromise. The opposition must be included; it needs to be heard. This is not a luxury, but a necessity. Orbán isn't protecting his country. He is leading it into a dangerous rigidity. But things that are too hard break all too easily."

"Populist Orbán has mastered many roles. His favorite is the savior of the nation who liberated Hungary from communism, restored traditional values and defends the honor of the country. Voters heartily backed his mission in 2010 -- he is able to push his agenda in Budapest with a two-thirds majority for his right-wing Fidesz party."

"A fast-tracked new constitution was adopted to proclaim faith, family and national pride as the highest goods. But since it entered into force a year ago, there were new additions, which aimed to deprive the National Bank of the EU's influence, secure former presidents' pensions or adjust voting laws to suit Fidesz."

"In response to warnings from Brussels, Orbán always takes on his second favorite role: that of the good democrat and convinced European who understands the concerns of his partners and makes a few small changes at home, only to deliver the next blow after the fact. The latest hits at the heart of the rule of law -- the independence of the judiciary. This time, the biggest threat to Hungary comes from its biggest admirer."

"When the right-wing politicians in Hungary pushed their new constitution through in 2011, Brussels, Berlin and Paris didn't want a big conflict. They had to save the euro, thus their crisis-ridden, non-euro neighbour Hungary remained the target of their 'concern.' After Budapest successfully ignored the complaints of Europe's leaders, the West returned to business as usual. The European Council passed a friendly resolution, and Brussels gave the green light for budgetary aid in Budapest. They had said their piece, and eased their conscience."

"The half-hearted European reactions have not only failed to improve things in Hungary, they have also made them worse. Criticism without consequences only serves to convince doubters that their government is strong and will prevail against powerful enemies. If Brussels only makes a show of strength when it's about money, then it just confirms the clichéd image that Orbán has created of Europe." 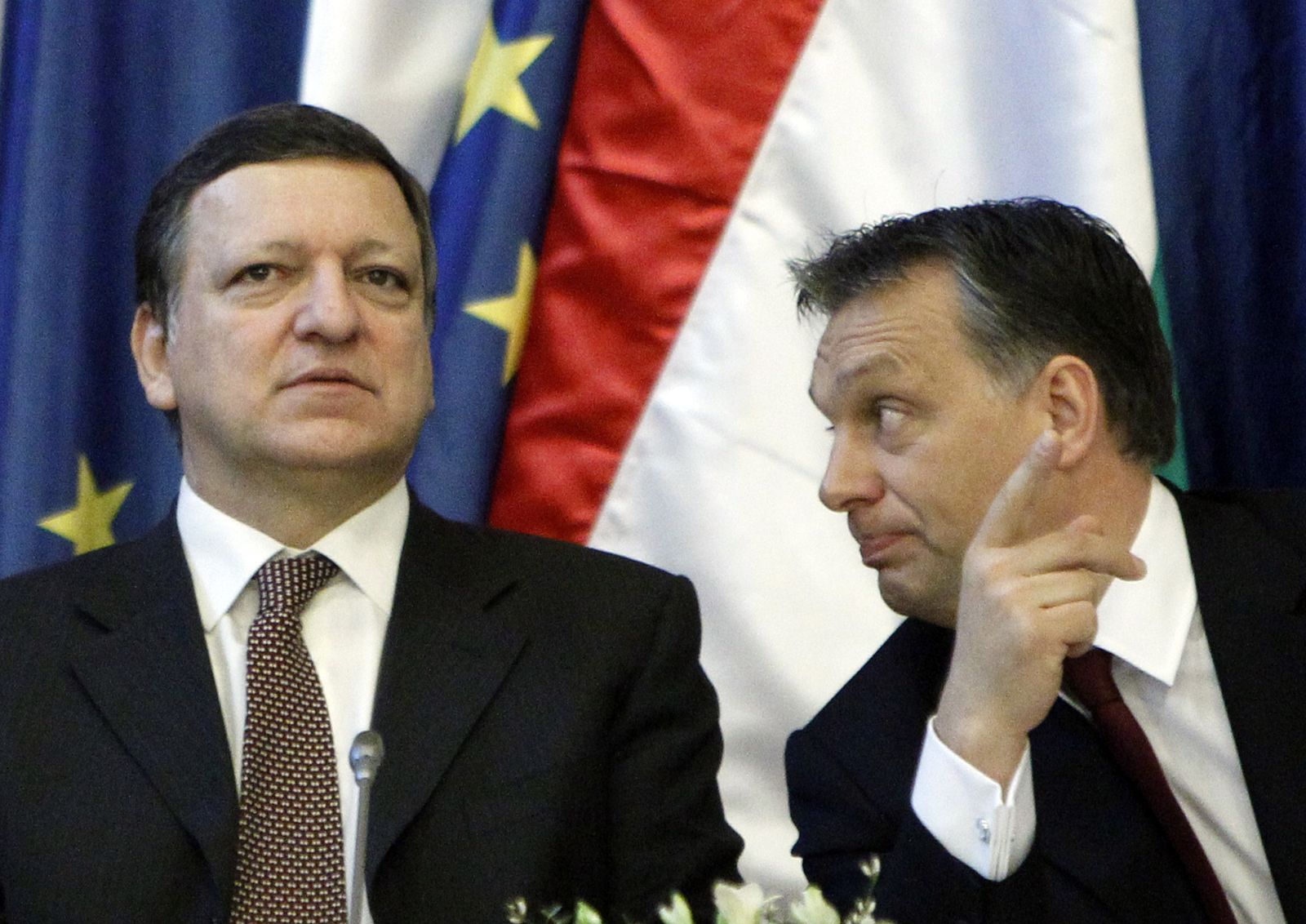