Not again! Just 13 months ago, European heads of state and government joined forces to usher Italian premier Silvio Berlusconi into retirement. Chancellor Angela Merkel and then-French President Nicolas Sarkozy marshalled all of their persuasive powers to clear they way for a reform government in Rome under the leadership of Mario Monti.

Now, with Prime Minister Monti having said over the weekend that he would resign as soon as he pushes through a key budget law, Italy's least serious politician is back. And Europe is groaning in displeasure. The French leftist paper Libération wrote "The Mummy Returns," a reference to a 2001 movie of the same name. And the otherwise dour German radio broadcaster Deutschlandfunk noted, "It is like a horror film: The undead keep coming back."

European political leaders, of course, tend to avoid such drastic formulations. Officially, capital cities on the continent were mum in response to Berlusconi's weekend pledge that he would seek a fifth term as Italian prime minister now that Monti is leaving. After all, diplomatic custom forbids meddling in other countries' internal affairs.

But it was difficult to miss the concern hidden between the lines of statements issued on Monday. German Foreign Minister Guido Westerwelle told SPIEGEL ONLINE that the situation in Italy threatened to spark renewed financial problems in the euro zone. "Italy can't stall at two-thirds of the reform process," he said. "That would just cause turbulence not just for Italy, but also for Europe." His counterparts from Sweden and Austria, Carl Bildt and Michael Spindelegger, were just as blunt. European Commission President Jose Manuel Barroso warned that Italy must continue on the reform path and European Council President Herman Van Rompuy emphasized that "Monti was a great prime minister of Italy" and that he hoped "the policies he put in place will continue after the elections."

German Chancellor Angela Merkel agrees. While not directly criticizing Berlusconi, she emphasized via her deputy government spokesmen how well she worked together with Monti. The spokesman said Merkel planned to tell the Italian premier just how highly she values him when they met on Monday in Norway, where they attended the ceremony bestowing the Nobel Peace Prize on the European Union.

The message is clear: Germany and the rest of the EU would like to see Monti continue. And they are terrified that Berlusconi might once again take the reins of the Italian government.

It is no secret, of course, that Merkel has little respect for machos in general, and those of Berlusconi's ilk in particular. Just how eager she was to see the back of Berlusconi as Europe was doing its utmost to prevent the euro crisis from spreading became clear in October 2011 during a joint press conference with Sarkozy. When asked about her relationship with Berlusconi, she and Sarkozy grinned at each other before demanding that Rome push through measures to pay down its debt load. Not long later, Berlusconi resigned.

Since then, newspapers belonging to Berlusconi's media empire have not been shy in their attacks on the chancellor, often printing photo montages showing her wearing Nazi uniforms and announcing the "Fourth Reich." They have proven just as harsh with Berlusconi's successor Monti. On the occasion of the first meeting between the two heads of government, the daily Il Giornale depicts Monti crawling on his knees to Merkel.

Berlusconi himself hasn't been above making derogatory comments about the chancellor either, allegedly referring disparagingly to Merkel's sex appeal in an overheard telephone conversation. He has also left no doubt as to his plan to campaign against Merkel and Germany's euro-crisis course in the coming campaign, saying over the weekend that it was time to "end the servility to Europe, which is dominated by Germany and Merkel."

It's exactly this tone that worries Germany and a large part of Europe. No one is honestly expecting a Berlusconi victory -- very few political observers in Rome foresee him becoming prime minister again, with polls pointing to majority support for a center-left government.

Still, Berlusconi's campaign against the European austerity directive could frighten financial markets and put Italy's fate back into the hands of speculators. It's also very possible that his People of Freedom party could win a strong enough position in parliament to block or seriously delay the reforms necessary to restore investor confidence in Italy.

The Monti government has not fundamentally changed Italy in its one year in power. But it has been able to project an image of stability to the outside world. This success is now in danger. Markets will be looking more closely at Rome -- and they will find that there's still much to be accomplished. The first signs of a crisis of confidence were already visible on Monday, when risk premiums on Italian sovereign bonds shot up and share prices fell.

The past three years have shown that every political uncertainty makes the euro crisis worse. A return of Berlusconi, an unpredictable populist, is the last thing that the financiers of the euro rescue plan in Brussels, Paris and Berlin need right now.

Policy heavyweights, including European Stability Mechanism CEO Klaus Regling, European Commission President Jose Manuel Barroso and European Central Bank board member Jörg Asmussen, have warned Rome to stay on the path of reform. Even the rest of southern Europe has reason to fear -- Spain watched with concern as risk premiums on their bonds went up as well.

Despite the precarious situation, other Europeans must be careful with their criticism of Berlusconi. Foreign interference in electoral campaigns is often counterproductive. If Monti were to run and foreign leaders were to come out too enthusiastically in support of him, they would be handing Berlusconi's media outlets an easy target. Monti already battles the image of being a Merkel protege -- likely one of the reason's for his reluctance to run.

When the electoral campaign in Italy really gets going, there's another danger: Shrill tones from Rome could also awaken the populists in Germany. Rabble-rousers like Alexander Dobrint, secretary general of the Bavaria's conservative Christian Social Union, have in the past gleefully decried what they see as the irresponsible budgetary policies of southern Europeans. German would-be disciplinarians would certainly not sit back and quietly observe a softening of austerity in Italy. 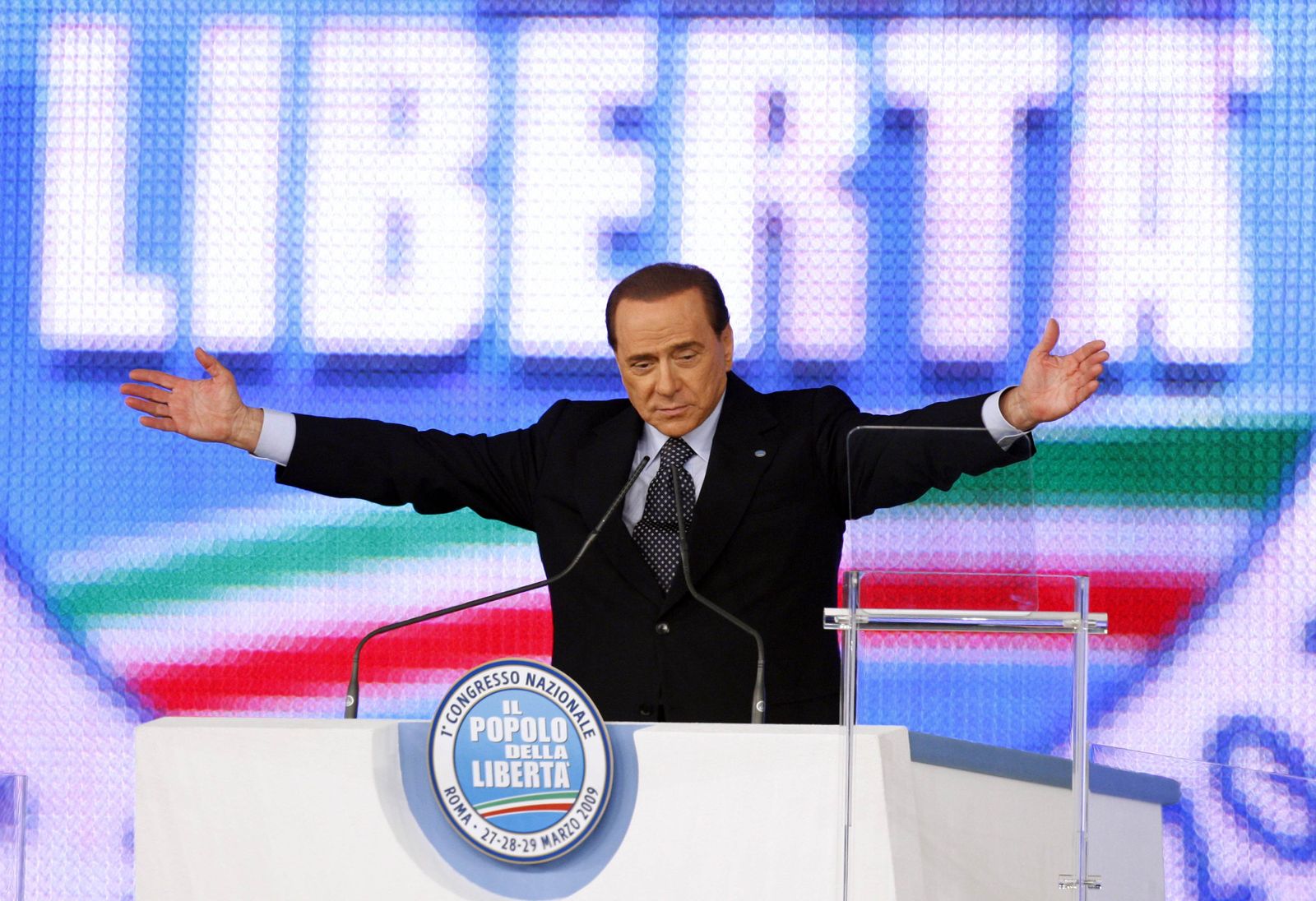 Silvio Berlusconi at his People of Freedom party conference in 2009