Ahead of talks in Brussels this week, European Union leaders said they planned on tackling some tough issues. But as the event drew to a close on Friday, it was clear they had failed to push ahead with their once-bold agenda for deeper fiscal and political integration. The quarterly European Council summit also made little headway on data protection reform or creating a coherent policy to address the divisive issue of migration.

This is likely because, after four years of crisis, the embattled euro zone's prospects are gradually improving and market pressures have abated -- in no small part due to the European Central Bank's commitment last year to "do whatever it takes." As a result, experts say, European leaders have lost the incentive to tackle the politically sensitive issue of developing an authentic political and fiscal union to complement the monetary one.

"The political and fiscal plans are basically off the table. There would need to be another major crisis to bring them back," says Zsolt Darvas, a senior fellow at the Brussels-based Bruegel think tank. Darvas suggests that a loss of market confidence in the highly-indebted Italian economy, the euro zone's third largest, could be the one wild card that would force the EU to refocus on fiscal coordination.

Despite an effort to synchronize national budgets through last year's Fiscal Compact, EU leaders have for the moment shelved proposals for establishing a joint European budget through the development of a European treasury, mutualizing debt, and creating a European unemployment benefits system, among others. "Fiscal coordination is not fiscal union," says Darvas.

"The debate has stalled because the urgency has decreased, because the crisis is over in the eyes of the media," says Karel Lannoo, CEO of the Center for European Policy Studies, citing recent reports on Spain's fragile recovery. "But has the economic situation changed so much?"

While the beleaguered southern European country technically emerged from recession in the third quarter of this year, eking out growth of 0.1 percent, the overall picture remains clouded. Spanish unemployment dropped only slightly from 26.3 percent to 26 percent. Quarterly growth in the whole euro zone averages about 0.2 percent per quarter, while euro area unemployment hovers around 12 percent.

Leaders Use Summit to 'Congratulate Themselves'

Beyond fiscal issues, "There is no political will at the moment to pursue political integration over justice, borders, or foreign policy," says Judy Dempsey, a senior associate at Carnegie Europe. She cites the rise of euro-skepticism and the far-right throughout Europe, which makes it difficult for governments to pursue pan-European policies.

Nonetheless, the EU did officially agree earlier this month to give the ECB supervisory powers over euro-zone banks, the first step in developing a so-called banking union. While a banking union is a vital component of further European integration, EU leaders have yet to agree on a number of important elements that would make such a union truly effectual: first and foremost, a joint resolution mechanism for addressing weak euro-zone banks. EU leaders used the summit to "congratulate themselves on the banking union, but did not progress in other fields," says Lannoo.

Still, while scant, progress was made on moving forward with the banking union, Darvas argues. "There was an agreement to reach an agreement on the resolution mechanism by the end of the year at the finance ministry level," he says. Following recent pressure by the ECB and warnings that some euro banks will likely fail upcoming stress tests, a compromise could be on the horizon. Even Germany, which has resisted a scheme that would force national governments to guarantee loans to struggling euro zone lenders, "might be willing" to shift its stance, says Darvas.

Ultimately, the summit was overshadowed by allegations that US intelligence agencies had monitored German Chancellor Angela Merkel's cell phone. Goals to develop a European digital economy and a solution to the issue of migration -- one of the most politically controversial issues in the EU --were addressed rhetorically, but little was achieved substantively.

The main public takeaway of the gathering, says Dempsey, was a commitment by Germany and France to hold talks with the United States over its spying practices. Following the summit, Merkel and French President Francois Hollande called for the development of a new transatlantic agreement over intelligence gathering. 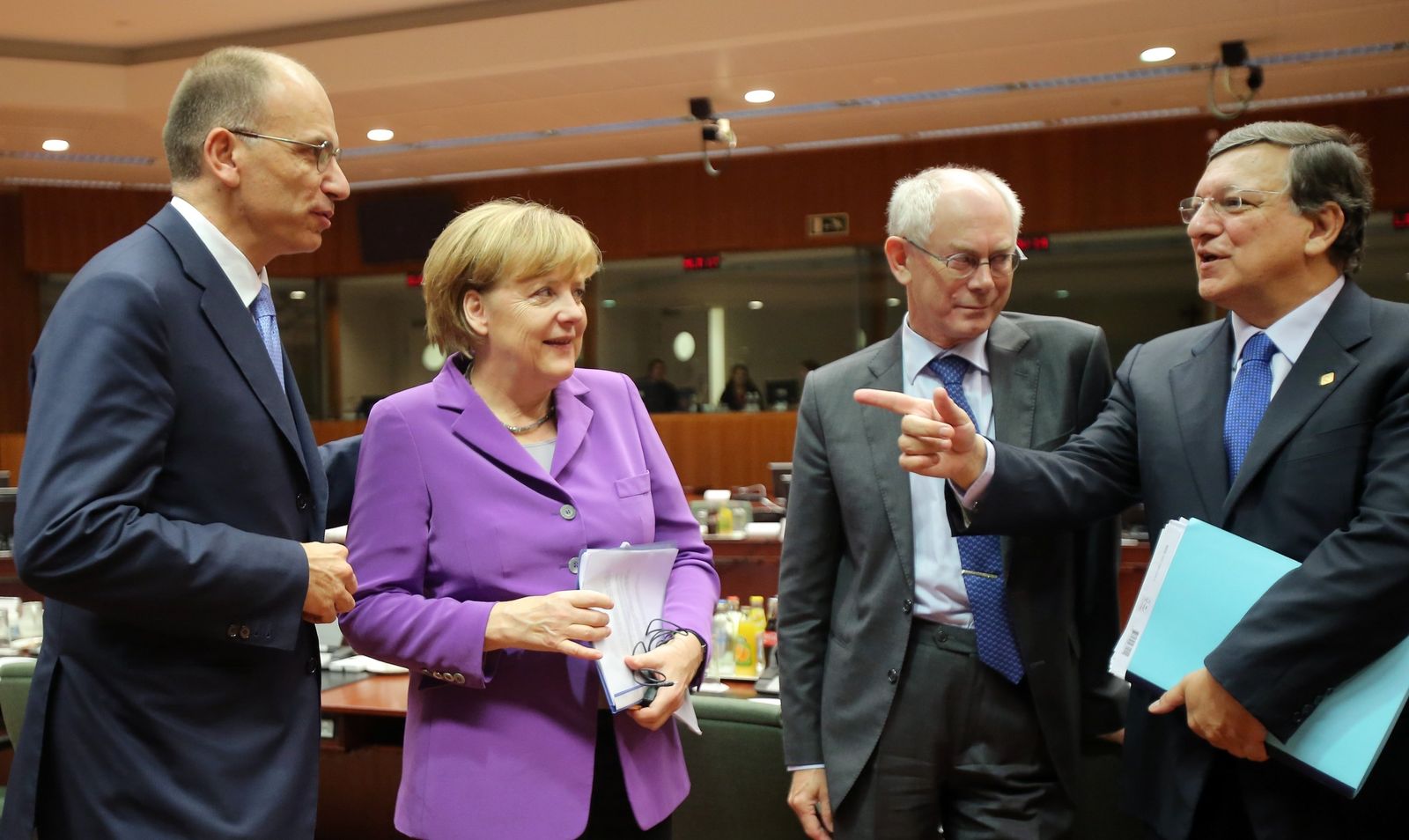 From left, Italian Prime Minister Letta, German Chancellor Merkel, European Council President Van Rompuy and European Commission President Barroso speak with each other during a round table meeting at an EU summit in Brussels.