Comments made by Alexis Tsipras, a Greek politician with the Coalition of the Radical Left (SYRIZA) party, declaring previous euro bailout agreements to be "null and void" earlier this week have vexed leaders in Brussels and across Europe, where warnings that Greece may have to leave the common currency are growing louder.

Speaking in Brussels on Wednesday, German Finance Minister Wolfgang Schäuble said that Athens can't be forced to retain the euro. "Greece must decide for itself if it wants to remain in the euro zone or not," he said. But if Greece wants to remain a member, then it "must form a stabile government and it must adhere to its obligations as well," he added. Schäuble noted that a large majority of Greeks wants to maintain the euro at any cost "because they are conscious of all the advantages of the common currency despite all the burdens."

German Foreign Minister Guido Westerwelle called Tsipras' statements "very alarming." He added: "We want Greece to remain in the euro zone, but the question of whether Greece remains in the euro zone is in Greece's hands." Westerwelle also clearly warned: "We stand behind our aid pledges, but that also means that the agreements need to be implemented." If Greece abandons the reform course it has agreed to with its international donors, "then I don't think the associated tranches (of aid) should be paid out," he threatened. Euro-zone governments said on Wednesday they would release €4.2 billion ($5.5 billion) to Athens as part of the next tranche of aid on Thursday, but they held back €1 billion, saying it would not be paid until June.

'There Are No Alternatives to the Agreed-to Bailout'

Westerwelle and Schäuble aren't the only politicians with stern warnings for Greece this week. "There is an agreement between Greece and the euro area, all the euro area member states and the European institutions," European Commission President Jose Manuel Barroso said Wednesday. "Greece has to respect its agreement."

Without mentioning Greece by name, Herman Van Rompuy, president of the powerful European Council representing the leaders of the EU member states, said: " Reforms are necessary, whether with Europe or without. A deficit of 15 percent and debts of 160 percent of gross domestic product are not acceptable, with or without the EU."

Meanwhile, Luxembourg Foreign Minister Jean Asselborn threatened to kick Athens out of the euro zone. "We have to say to the Greek people right now that the situation is serious, that no European Union country will be able to release a portion of the €130 billion for the Greeks if there is no functioning government that respects the rules and manages the disbursed money," he said. If Greece wants to stay in the euro zone, he said, then it must support parties that back reforms. "Otherwise -- and I'm sorry for Greece and the Greek people -- but there comes a point where Greece will have lost its last chance."

In Frankfurt, European Central Bank board member Jörg Asmussen of Germany told the Handelsblatt newspaper: "Greece needs to be aware that there are no alternatives to the agreed bailout program if it wants to stay in the euro zone."

In Berlin, Peer Steinbrück of the center-left Social Democratic Party, who served as German finance minister during the 2008 financial crisis under Chancellor Angela Merkel, also had harsh words for Greece. "If I had political responsibility, I would want to prepare for a Plan B that would foresee that the European currency union, that the euro zone, no longer necessarily consists of 17 member states," Steinbrück told a German TV station.

Finally, in an interview published in the Thursday edition of the Passauer Neue Presse newspaper, Merkel herself offered: "I have always said that overcoming the crisis is a long and strenuous process and I have always wanted to solve it in such a way that Greece stays a member of the euro zone." But the chancellor also said that Athens had to respect the pledges it has made to its international helpers.

On Germany's editorial pages on Thursday, there was growing sentiment that Greece may soon have to leave the euro zone. Some commentators argue that, although ugly, this could have the knock-on effect of encouraging other troubled euro-zone states to get more serious about reforms.

"As long as the Greek parties do nothing other than frivolously and immaturely pursue the easiest way out of the crisis following Sunday's protest vote, Europe should be asking itself if the billions in aid are going to the right hands. It would also be time to stop the payments, even if the tranche about to go out now was approved long ago. There should be a moratorium until the Greeks have answered the only important question: Do they want to stay in the euro zone or not?"

"The euro zone can survive without Greece. There is of course a danger that Tsipras will blackmail Europe by claiming that if a small country were to leave the euro zone, that the financial markets would demand higher risk premiums from other shaky countries. That could destroy the fruits of the reform efforts in Spain and Italy. But there's also another scenario that is no less likely: that a Greek exit could actually make the euro zone stronger. Europe has built and expanded firewalls to prevent the crisis from spreading. Italy, Spain and Portugal would quickly recognize the dramatic consequences of Greece's carelessness for the people. It might motivate them to rectify the mistakes of the past. In the end, Greece might have done the euro one last favor."

"At some point, even the well-intentioned lose patience. The utterings of the leader of the Coalition of the Radical Left in Athens are even disgusting the very European politicians who have so far sought to keep Greece in the currency union for economic and political reasons. The audacity with which Tsipras declared austerity to be over is a slap in the face. Now it appears the point has been reached in which the country's exit from the euro zone is no longer being presented as a catastrophe, but rather as something that must be accepted as an unpleasant consequence of Greek political decisions."

"An exit could also actually have a disciplinary effect on other countries: Those who want to take a short break on the path to reforms and deficit reduction could have an uncomfortable experience. Greece's continuing presence in the euro zone is not a gift -- it is something it has to earn. Otherwise everything will go down the drain."

"How the times change. The question of whether the Greeks will form an extremist government led by the left and quit the euro seems to leave the European markets relatively cold. But half a year ago it would have been much different. Why? Because banks have in that time divested most of their Greek government bonds, which are now either in European Central Bank portfolios or held by Greek institutes and private investors. A similar trend has also been observed for some time now in Italy, Spain and Portugal."

"A Greek exit from the euro, financial experts calmly explain -- despite the uncertain future of the Greek government negotiations -- would thus have only internal effects. The risk of contagion would be low for other southern European nations, they say. But this calculation fails to include the potential loss of trust in the euro zone as a whole for its failure to solve its problems, along with possible asset erosion for the ECB."

"A Greek government that could come up with a consensus for dealing with the EU would thus be a much more reassuring solution to the crisis."

"Europe appears to be stuck in a time loop. As if in a nightmare, we find ourselves continually returning to the same dilemma: As soon as we think we have passed the worst of the crisis, the debt plague returns with a vengeance. The fact that we always return to the starting point of Greece is no coincidence. It all began in Athens, but nothing there has been resolved. The country has been in a coma for the past two years."

"It is up to the Greeks to decide if they want to play in the Europa League or in the regional division. Two-thirds of Greeks want to stay in the euro zone, but at the same time they are reluctant to carry out the unavoidable reforms. If the Greeks themselves do not realize that the two things go together, then they must take the necessary action. An exit from the currency union would be regrettable politically, but it does not need to be economically fatal for the euro zone." 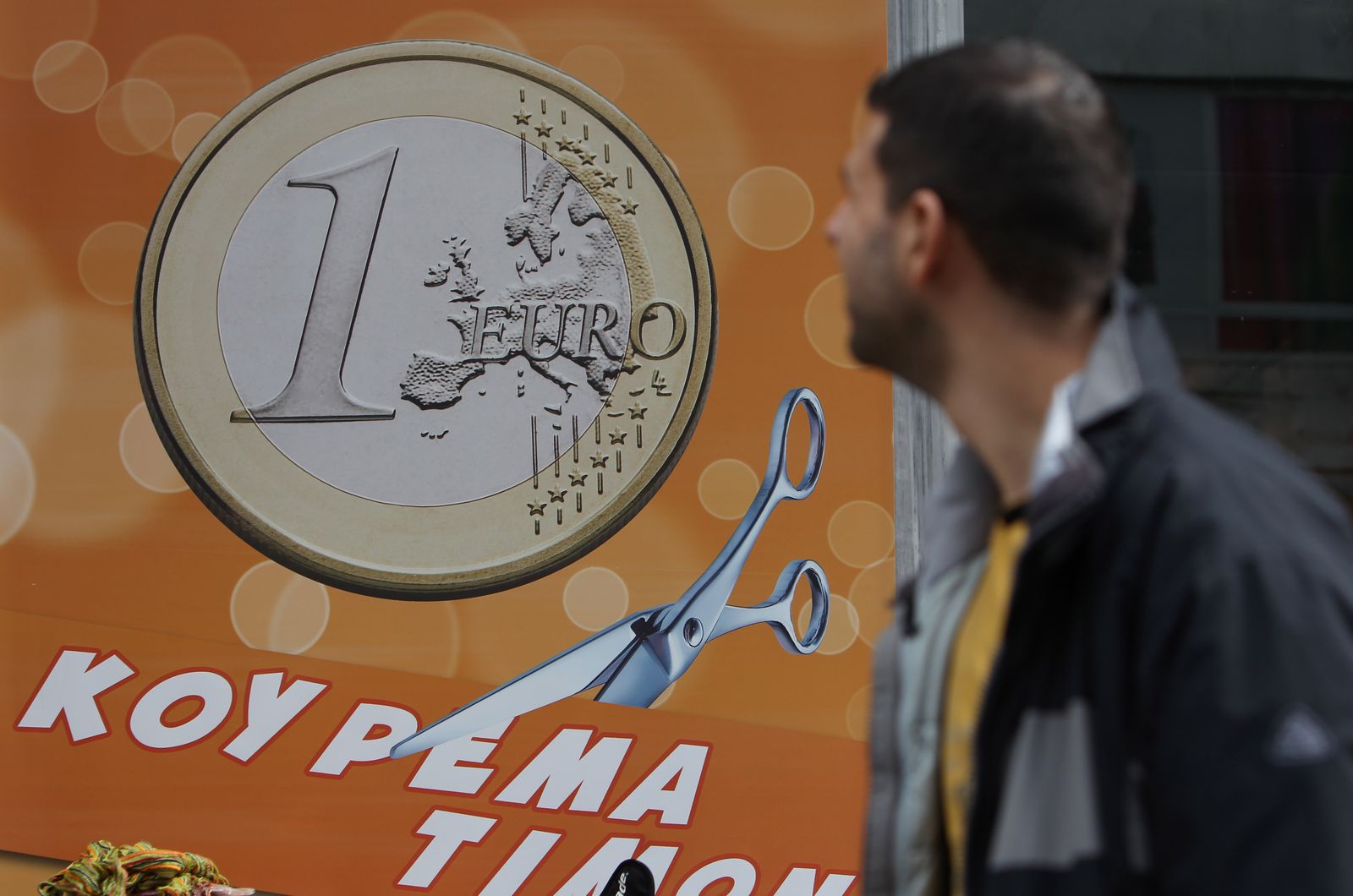 It's time for Greece to decide: Should it keep the euro or exit from it?