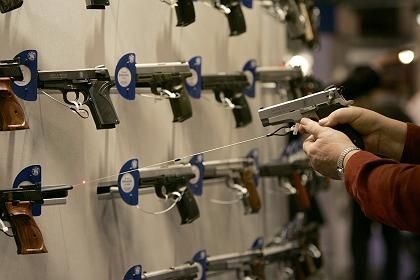 In America, "buying a submachine gun is often easier than getting a driver's license."

Across the continent on Tuesday, European media rubber-neck at Monday's massacre in the United States. Most seem to agree about one thing: The shooting at Virginia Tech is the result of America's woeful lack of serious gun control laws. In the strongest editorialized image of the day, German cable news broadcaster NTV flashed an image of the former head of the National Rifle Association, the US gun lobby: In other words, blame rifle-wielding Charlton Heston for the 33 dead.

Papers reserve their sharpest criticism for the 2004 expiration of a 10-year ban on 19 types of semiautomatic assault weapons under the then Republican-controlled Congress. Others comment on the pro-gun lobbying activities of Heston's NRA. Some papers also draw analogies between school shootings and Muslim fundamentalist suicide bombers.

"The passionate feelings of the gun lobby may be traced to the Second Amendment of the US Constitution, enshrining 'the right of the people to keep and bear arms'. Although the provision stems from the times when 'well regulated militias' were deemed necessary to protect against a British attempt to regain the lost colonies, it is the default position of any argument against greater gun control here."

"As such, it has trumped every other consideration, not least the fact that on any given day about 80 people are killed by firearms, the vast majority by murder or suicide. Gun violence may cost $2.3 billion each year in medical expenses, but it is a price, gun supporters believe, that is worth paying to protect a fundamental freedom ..."

"There is no sign of attitudes hardening. Despite the opposition of every police force in the land, Congress in 2004 allowed to lapse a 10-year federal ban on semi-automatic assault weapons, a particular favorite of violent criminals. The reaction was not exactly deafening. Even amid yesterday's shock, the initial calls were for stricter security measures on campuses -- not serious moves to reduce gun ownership."

The Times of London writes:

"The trauma of the death of the students at Virginia Tech that will spread across the university and the whole country will be magnified by the feelings of so many people who feel that they should have been able to prevent it."

"Doubtless there will be a call to review the availability of firearms. The National Rifle Association's (NRA) response is predictable too. They will point out that events such as this are not carried out by a rifle-wielding member of a weekend militia. There is no doubt that access to rapid-action shotguns makes these events even more destructive but as we have seen with suicide bombers, who are closer to spree killers than is often realized, if a person really wants to take their own life and kill others in doing so it is exceptionally difficult to prevent it."

"The shooting at Virginia Tech ... is a dramatic episode of school violence that fits into a long series of such episodes, a series topped by the drama at Columbine, the school attacked by two adolescents in 1999 ..."

"If Columbine left such a strong impression, that was because it was one of the first dramas of school violence that received broad coverage in the media. Americans were informed of what was happening in real time, via TV and the radio. The students called their families or CNN even as the killers were still roaming the corridors of the schools. ..."

"This new tragedy presents a new opportunity for American public opinion to interrogate itself about a society which, as one of the students who survived Columbine said at the time, is very much responsible for what has happened."

"It was all too easy easy for the elected representatives of the United States, from the White House to the Congress, to express their sadness yesterday; America's problem with fire-arms represents a political issue for which they share responsibility. Here is a country that represents the vanguard of development and democracy while it is legal to carry a gun in 45 of 50 states, as long as the gun is not loaded. ... At the end of 2004, the Republican-controlled Congress allowed a law to expire that prohibited the sale of semi-automatic and military weapons. Thereafter, legal changes were made to protect the producers and vendors of fire-arms from being held responsible for the actions of gun owners."

"Contrary to what one would imagine, this backward stance is not something left over from the Wild West. It goes back to the creation of the United States and the War of Independence against the English. ... While most states have issued laws designed to control the sale of arms, the NRA ensures they remain inefficient or are not applied. Strongly linked to the conservative fringe of the Republican Party, the NRA spent $400,000 a day to prevent the election of the Democratic candidate John Kerry during the 2004 presidential elections ..."

"Yesterday's massacre will surely revive the debate in the United States, but within the federal system, the question is ultimately settled by each individual state. Going back on the lapsing of the law issued by Washington could provide an opportunity for the Supreme Court to take a stance on the issue for the first time since 1939."

"Shocked psychologists and sociologists ask themselves how gun violence is to be explained. Some speak of the repressed violence of a country that goes back to generations of pioneers habituated to achieve justice on their own and which is forced to face the powerful tensions within a multiracial society. Others criticize the spread of violent video games (which are, however, a phenomenon that has only emerged in recent years). In any case, gun violence is becoming a common phenomenon in the United States, one that is no longer surprising. In major cities such as New York, the extension of surveillance measures, a tough approach to crime and measures to rebuild the urban fabric have led to a drop in crime and especially in the number of homicides. But in suburban areas and smaller cities, episodes of 'ordinary violence' are on the rise. In the poorest neighborhoods, people are getting used to the use of fire-arms -- a phenomenon that is linked to the growing tendency among many young people to resort to violence to settle even minor disputes and to the ease with which weapons can be acquired."

"The bloodbath on the university campus is the work of a suicide killer -- an American suicide killer who, differently from Muslim killers, did not act out of religious motives but was driven instead by the unrest affecting broad layers of US society. America is a nation that has for some years been in danger of becoming more and more unloved in the world, especially in the poorest countries. During the period following World War II, America was seen as the guardian of democracy and was equated with the defense of liberty; today, America is a superpower that begins wars and lives with the constant necessity of having to defend itself against the enemy -- whether this enemy be called Islam or whether it bears the face of the neighbor who has done you wrong."

"The president of Virginia Tech called it a tragedy of monumental proportions. But similar comments could already be heard following previous tragedies of this kind. The shooting spree at the Columbine high school in Colorado, for instance, revived the debate on the necessity of better controlling access to weapons. This led to some laws being toughened and security at schools being improved. But the measures are decided by the individual states and are constantly side-stepped by means of an exaggerated interpretation of the US constitution."

"Now we will probably begin discussing the overly lax gun laws in the United States. There, buying a submachine gun is often easier than getting a driver's license. And a new ban on violent games and killer videos will also be put back on the agenda. But in the end, nothing is likely to happen. And the next killer already lives somewhere among us. But we have little reason to point an accusing finger at the Americans. Despite strict gun legislation, we (in Germany) have experienced the school shootings in Erfurt and Emsdetten. We have to consider the problems in our society. And we have to take care of our fellow humans."