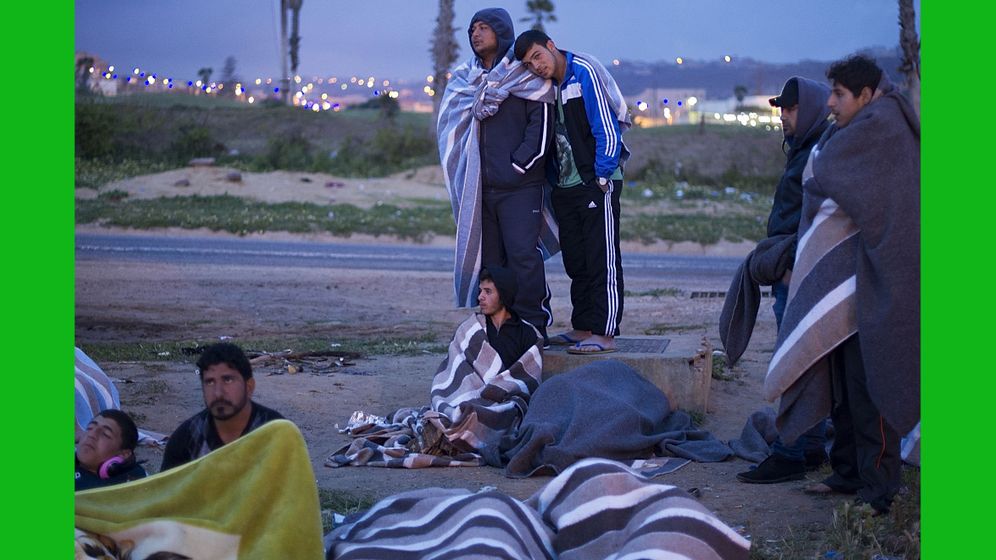 Photo Gallery: Misery in the Mediterranean

Nasir Abubakar says the weather was good. "There was no blazing heat from above and no waves below," he says. But that didn't prevent the 30-year-old Nigerian from almost dying during his journey across the Mediterranean Sea.

He says that thousands of people were crammed into a boat without food or water. For five or six days they drifted aimlessly on the open sea. Abubakar says he is no longer certain of other details. He witnessed children, women and men on the boat dying of thirst next to him.

"Some asked me to pray for them and then jumped overboard to die," he recalls. Barely clinging to consciousness, he lay down until an Italian Coast Guard helicopter pointed the disoriented captain on the path to Lampedusa. Abubakar can still remember the helicopter's light shining down from as dusk turned to night. He had reached Europe, his destination.

"But nobody counted the people who drown and sink to the bottom of the sea," Abubakar says.

Abubakar arrived on the Italian island of Lampedusa in the fall of 2011. In the spring of 2014, the Italian government hoped that the kind of things that happened to Abubakar and the people on his boat wouldn't be repeated. The Italians changed their practices following the drowning deaths of 387 people last October near Lampedusa. With the Mare Nostrum -- Our Sea -- rescue program, the Italians are now intercepting refugee boats in the Strait of Sicily and transferring the passengers onto Italian ships.

A Dramatic Increase in Refugees

The consequences of the shift have been dramatic, with the number of refugees arriving in Italy rapidly rising. The United Nations Refugee Agency (UNHCR) estimates around 18,000 have completed the journey since the beginning of the year. At one point last week, amid favorable weather conditions, 4,000 refugees arrived within a period of just 48 hours. By contrast, during the first quarter of 2013, only around a thousand refugees made it to Italy using the primary route across the Mediterranean.

The numbers lay bare an equation that has thrown the European Union into a moral dilemma. In places where refugees are given more humane treatment, their numbers are growing. So is it better to adopt policies of deterrence or to accommodate the newcomers? The issue of refugees is bringing Europe into direct conflict with its own self-image. A Continent dedicated to the principle of human rights and is fond of pointing out its own Christian roots to other cultures is still lagging behind its own aspirations.

Meanwhile, the scope of Europe's unresolved refugee problem has taken on a new dynamic with the explosive growth of refugees coming to Italy. The government in Rome has already rung the alarm bells, with Interior Minister Angelino Alfano warning that 300,000, or perhaps even 600,000, people in Libya alone were ready to board smuggling boats bound for Europe. "We can't take them all," he said.

'This Is Not an Italian Problem'

Italy has long been calling for changes to be made to the EU's 2003 Dublin regulation, which stipulates that asylum applications can only be processed in the country where refugees first set foot on EU soil. "This is not an Italian problem," Foreign Minister Federica Mogherini said. "Refugees are in the EU as soon as they arrive in Italy."

In light of the fact that the Dublin regulation has essentially failed, politicians in Germany are viewing the rising numbers of refugees with increased concern. A spokesman for the German Interior Ministry warns that officials in Berlin assume that "a number of boat refugees will continue their journeys to Germany to apply for asylum here." The numbers seem to support that claim. During the first quarter of 2014, the number of asylum seekers in Germany rose by 76 percent against the same time period last year. Increased attention is being paid to the issue in German states as well, which, together with local communities, are responsible for providing accommodations for refugees. In Lower Saxony, Interior Minister Boris Pistorius, of the center-left Social Democratic Party (SPD), has asked his staff to provide him with regular updates on the situation in the Mediterranean. "We're going to have difficulties providing accommodations," he warns.

Still, Berlin officials haven't exactly been sympathetic to calls for help from Italy. Officials in the Interior Ministry don't see any reason for special program to take in additional refugees in response to the situation in Italy. The spokesman notes that Germany itself is currently taking in far more asylum seekers than Italy. Last year, Germany registered 127,000 new asylum seekers, compared to only 27,000 in Italy.

Martin Schulz, the Social Democrats' leading candidate for elections to the European Parliament, has a different take. He argues that the affected countries have been left in the lurch by the EU for some time now. "In areas facing particular hardship as a result of immigration, the distribution of refugees amongst the entire EU needs to be organized more equitably," he argues. "Financial assistance should also be supplied to those who are doing more than others." The leading candidate for the conservative Christian Democrats, Jean-Claude Juncker, is also calling for "greater solidarity in receiving refugees." He says that reaching agreement on implementing a quota system -- a controversial method that would require EU countries not bordering on the Mediterranean to take in a set number of additional refugees to help alleviate the burden -- should be added to the agenda of the next EU summit.

One of Europe's Most Divisive Issues

The unresolved refugee problem has returned to the fore in Europe just as it prepares for May's European Parliament elections. Once again, the EU is showing itself to be a union of national interests -- and refugees have long been among the most contentious issues in the 28-member bloc. And Germany hasn't distinguished itself either. After the drama off Lampedusa last fall, then-Interior Minister Hans-Peter Friedrich of the conservative Christian Social Union, the Bavarian sister party to Merkel's Christian Democratic Union (CDU), hastily ensured Germans that the EU's asylum policies wouldn't be changed in any way.

Remarks like that set the tone in Europe and EU leaders subsequently delayed taking any steps toward fundamental reform. When Schulz, currently president of the European Parliament, called on other member states to be more generous than Italy in taking in refugees, he faced a barrage of criticism back home in Germany. In times of widespread euro-skepticism and double-digit unemployment among young adults in euro crisis countries, the line went, proposals like that don't fly with the public. They merely put wind in the sails of radical opponents of Europe.

And that goes to the heart of the dilemma currently facing Europe's mainstream political parties. They have every reason to fear that a broad debate over the EU's failed refugee policies could become a draw for right-wing populists. Addressing the problem, Juncker said recently: "We have to fight to prevent gains by the right-wing radicals in the European election."

'Being on Some Overloaded Boat Is Not an Admission Ticket'

In Germany, Bernd Lucke, spokesman for the nascent euro-critical party Alternative for Germany (AFD), is calling for refugees who enter the country illegally be taken immediately to a "safe African country." "We have to make it clear that being on some overloaded boat is not an admission ticket to the EU. Otherwise, more and more people will undertake this risky trip," he says.

Andreas Scheuer, general secretary of the CSU, leaves no doubt that his party plans to position itself clearly within the anti-immigration camp during the election. "Asylum policies and the issue of poverty migration will play an important role in the campaign for the European Parliament, he says. "We have learned from experience that it is asylum in Germany that is sought by those who land in Italy." Noting that the number of people applying for asylum in Germany is already higher than it has been in years, he adds: "We cannot carry the weight of the entire world's pain."

With lines like, "those who deceive are out," tough talk on refugees and related policies has become part of the CSU's standard repertoire. Whereas Chancellor Merkel's CDU is taking a more distanced approach to the challenge presented by the anti-euro AfD, its Bavarian counterpart is engaging in direct confrontation -- its callous reaction to the sufferings of refugees in Italy reflects that.

Things could have turned out differently. The tragedy in Lampedusa could easily have served to trigger a deep and critical look at European refugee policy. Instead EU leaders limited any new measures to those focused on preventing such jarring catastrophes from happening again.

Eurosur is the abbreviation given to the European Border Surveillance System, a sophisticated monitoring system consisting of satellites, drones and radar systems. The program, developed at a cost of around €340 million ($470 million), has been in operation in several EU member states since December. But it is extremely controversial because it has many applications: It can be used to save refugees, intercept them or even keep them out.

But Eurosur is not a solution for the refugee issue. Indeed, the situation continues to escalate, with the number of illegal border crossings into the EU now even larger than it was at the peak of the Arab Spring in 2011. Seventy percent of the refugees coming across the Mediterranean originate in Libya, which has become a failed state following the toppling of dictator Moammar Gadhafi. Italian Foreign Minister Mogherini has noted that the situation in Libya makes addressing the refugee problem all the more difficult given that talks with the government there are a virtual impossibility.

Is the Boat Full?

The number of asylum seekers in Germany has likewise risen continuously in recent years. Indeed, astonishingly few apply for asylum at the EU's external borders in Italy, Spain or Poland. Relative to its number of inhabitants, Italy is only in 15th place; Germany is in seventh. Relative to their populations, smaller member states like Malta or Sweden take in three times as many refugees as Germany does and the total percentage of all refugees in Germany remains at a figure far below 1 percent of the entire population.

So is the boat full, as the old populist rhetoric goes? It's a controversial issue, especially if you ask the German people directly. A survey conducted by pollster Forsa in March found that only one in three Germans wants Germany to take in more refugees. Hamburg Mayor Olaf Scholz of the SPD, who is closely involved in the issue of migration in a city with a high population of immigrants, nevertheless pleads for a more liberal visa policy. He says that preparedness to take in refugees and tolerance is still substantial but asks, "What happens if the people say: That's enough?"

German Development Minister Gerd Müller of the CSU suggests one cannot forget the old idea of addressing the refugee problem at its source: Africa. He recently ordered his staff at the ministry to come up with a special program for refugees. But the main driving force behind his dedication to the issue is that of preventing a further exodus to Europe. A 100-day progress report from the ministry makes clear its desire to "vanquish the causes of flight."

When it comes to Africa, though, things have been heading in the opposite direction. While Germany slightly increased its development expenditures last year, funds for Africa have decreased at a rapid pace. According to calculations by the non-government organization ONE, which focuses on reducing poverty around the world, Germany cut its development spending in Africa by half a billion euros in 2013. The organization claims that no other donor country has scaled back its participation to the degree Germany has. At best, the €100 million that Berlin has since been pledged to Africa can be viewed as a damage control effort.