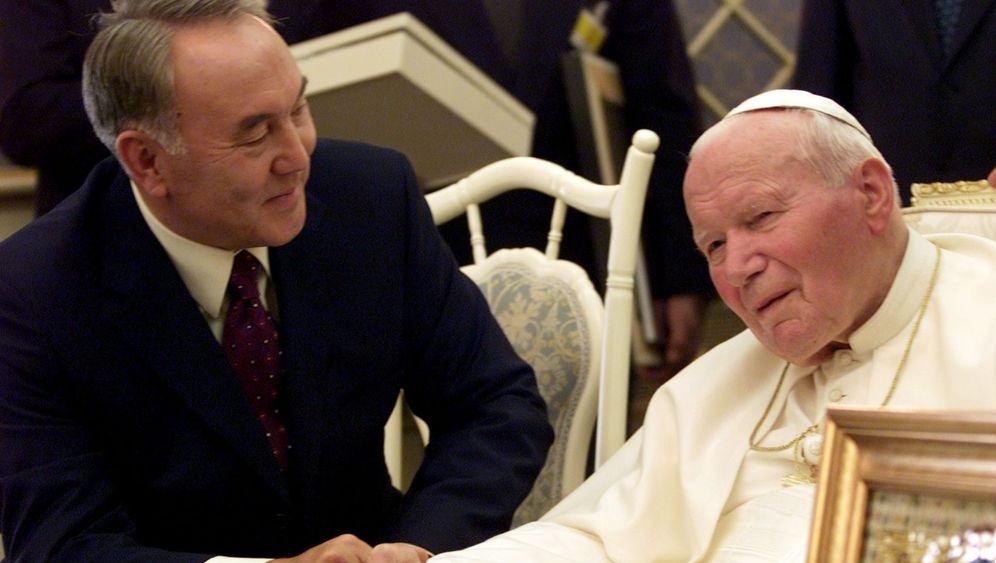 For human rights activists, Kazakh President Nursultan Nazarbayev is a despot through and through. He has established a "postmodern dictatorship," says the New York-based Human Rights Foundation, "looting the country's treasury of tens of billions of dollars for personal enrichment." And according to Amnesty International's latest annual report, he controls a system in which torture is still employed.

For a tyrant, however, Kazakhstan's ruler has some unusual advocates: former German and Austrian Chancellors Gerhard Schröder and Alfred Gusenbauer, and former British and Italian Prime Ministers Tony Blair and Romano Prodi, as well as former Polish President Aleksander Kwaniewski and former German Interior Minister Otto Schily. All of them are members of social democratic parties in their countries.

Gusenbauer, Kwaniewski and Prodi serve officially as members of Nazarbayev's "International Advisory Board." They meet several times annually, most recently in the Kazakh capital Astana two weeks ago, and are each paid annual fees in the seven figures. According to the British press, former British Prime Minister Blair, also an advisor, receives an annual salary of up to €9 million ($11.7 million). Schröder, for his part, denies being a member of the advisory board. Nevertheless, he sometimes has face-to-face meetings with the autocratic ruler from the Central Asian steppes, and praises Kazakhstan as an "internationally recognized, open country." In November 2012, Schröder congratulated the Kazakhs on being named the host of Expo 2017, which he characterized as the "next step towards modernization."

Nazarbayev, the former head of the Communist Party in Kazakhstan, already ruled the republic during the Soviet era. In 2010, he had a law enacted that named him "Leader of the Nation," which now makes him immune to prosecution and the seizure of his assets for the rest of his life. Nevertheless, the West continues to court Nazarbayev. "Kazakhstan's most important international partners have failed to react to serious human rights violations," says Human Rights Watch. The country has enormous mineral resources, including oil, natural gas, gold and uranium, which make the country a coveted energy supplier and its president an influential player on the international stage.

On Feb. 18, Otto Schily also entered the limelight in a case involving Kazakhstan. In his capacity as an attorney, he demanded the issuance of an arrest warrant for the country's self-proclaimed public enemy No. 1: Rakhat Aliyev, the president's former son-in-law, who had disappeared and gone to Malta. In his new book, "Tatort Österreich," or "Crime Scene Austria," Aliyev criticizes the attempt, with Schily's help, to garner publicity by hoisting his case onto the European stage.

For years, Aliyev and Nazarbayev have been embroiled in a feud in which there are no clear delineations between good and bad, although the lobbyists for Kazakhstan from the former elite ranks of Europe's social democratic parties would beg to differ.

Aliyev was once a close confidant of the Kazakh president. He served as deputy head of the intelligence service, senior official in the tax authority and ambassador to Austria. Most importantly, however, he was Nazarbayev's son-in-law. In 2007, he fell out of favor with his family and was sentenced in absentia to 40 years in prison for kidnapping and attempting to overthrow the government. He is also accused of murder, torture and money laundering. He is being investigated by prosecutors in Vienna and the northern German city of Krefeld.

Aliyev not only denies all charges, but in fact accuses the president of the most serious of crimes. According to Aliyev, Nazarbayev is guilty of the murder and torture of opposition members, stealing billions and transferring funds to secret accounts abroad. Russian sources estimate the ruling family's assets at $7 billion (€5.4 billion).

Both sides in the family drama are trying to manipulate the public in their favor. On one side is the president, with his prominent advocates in the West; and on the other is Aliyev, who is following the pending investigation against him in Austria from his hideout in Malta. He tells SPIEGEL that he is willing to appear in Austrian courts. But he also describes his fear of being kidnapped first. Whenever he senses that someone is following him, he photographs the person and stores the images on a hard drive.

At a press conference in Vienna in February, former German Interior Minister Schily called it "macabre" that Aliyev can "still move around freely in Europe" -- before reading the riot act, in a very imperial German manner, to what he implicitly referred to as the lame Austrian authorities. Sitting next to Schily was Gabriel Lansky, looking visibly pleased.

Kowtowing to the Kazakhs

The Viennese attorney is a power broker in a Kazakh game of Monopoly worth billions that is now unfolding on the European stage. He is doing everything in his power to bring Aliyev to court. With his excellent connections within social democratic parties and beyond, he helped ensure that the Aliyev case was assigned to Schily so it would also receive full attention in Germany. But something that might be even more helpful is the fact that former Austrian Chancellor Gusenbauer, a member of Nazarbayev's advisory board, was the best man at Lansky's wedding.

In response to the accusation that he is being paid for his services directly from the Kazakh autocrat's coffers, Lansky cites his reputable allies. For example, a retired director of the Europol law enforcement agency is providing him with valuable reports on a fee basis.

It makes perfect sense that Gabriel Lansky, of all people, opposes him with every legal trick at his disposal, says Aliyev ironically in Malta. He explains that in the early 1990s, Lansky's law firm represented several companies registered in Austria that were used to lay the foundation for Nazarbayev's fortune.

The whole inner-dynastic dispute is difficult to sort out, not least of whom for the Germans. Not surprisingly, Chancellor Angela Merkel's government is keeping a low profile on the case, especially after contracts worth some €3 billion were signed during Nazarbayev's visit to Berlin last year. Relations between the two countries are "so good that I can hardly improve them," the German ambassador in Astana said in a speech in November. Kazakhstan, he added, shines as a result of its "wise political leadership" and the determination not to be talked into believing the "artificial problem" of human rights.

The fact that a German diplomat is kowtowing to the Kazakhs to such an extent is bad enough, says Green Party parliamentarian Viola von Cramon. But even worse, she points out, is the fact that politicians like Schröder, Schily, Prodi and Blair are allowing themselves to be roped in for Nazarbayev's purposes. "Especially because he is currently tightening the screws more and more, but thanks to the influence of Western lobbyists, little of that is reaching the outside world," she says.