The highest representatives of the European Union on Monday accepted the Nobel Peace Prize on the bloc's behalf, while at the same receiving calls to use the bloc's unity in its efforts to combat its economic crisis.

Committee chairman Thorbjoern Jagland said the reconciliation between centuries-old enemies like Germany and France was "probably the most dramatic example in history to show that war and conflict can be turned so rapidly into peace and cooperation." He added that the presence of Chancellor Merkel and President Hollande at the ceremony made "this day very particular, symbolic for all of us."

The forerunner to the EU, the European Coal and Steel Community, was established some 60 years ago on the idea that close economic ties would prevent the member nations from going to war with each other. As the EU battles soaring unemployment and growing inequalities among member states exacerbated by the euro currency crisis, "the political framework in which the union is rooted is more important now than ever," Jagland said.

The Nobel committee announced the surprise pick of the EU for the peace prize on Oct. 12, saying the organization "has helped to transform most of Europe from a continent of war to a continent of peace." The prize includes an award of €930,000 ($1.25 million). The bloc will match that money and donate it to projects that help children in war zones.

The pick of the EU has not been without controversy. On Sunday, about 1,000 members of leftist and human rights groups marched through Oslo protesting the decision, saying the EU did not meet the criteria for the prize laid out by Alfred Nobel in his 1895 will.

That will mentions disarmament, something German Left party co-chairman Bernd Riexinger said the EU has worked against. He said the bloc "belongs to the biggest weapons exporters in the world," and that "every weapon finds a war." Germany's weapons exports to authoritarian regimes like that of Saudi Arabia "produce the wars of the future," he said.

He also criticized the EU's domestic social policy, saying: "The gap between rich and poor and social unrest is increasing across all of Europe."

Previous Nobel peace laureates like South African Archbishop Desmond Tutu, Mairead Maguire of Northern Ireland and Adolfo Perez Esquivel of Argentina have also criticized the peace committee's decision, saying the EU relies on military force to establish security. Amnesty International warned that EU leaders should not "bask in the glow of the prize" while xenophobia and intolerance are still on the rise among the bloc's 500 million citizens.

The Nobel prizes in medicine, chemistry, physics and literature were also awarded on Monday, the anniversary of Alfred Nobel's death in 1896. The peace prize is awarded in Oslo, while the others are handed out in Stockholm. 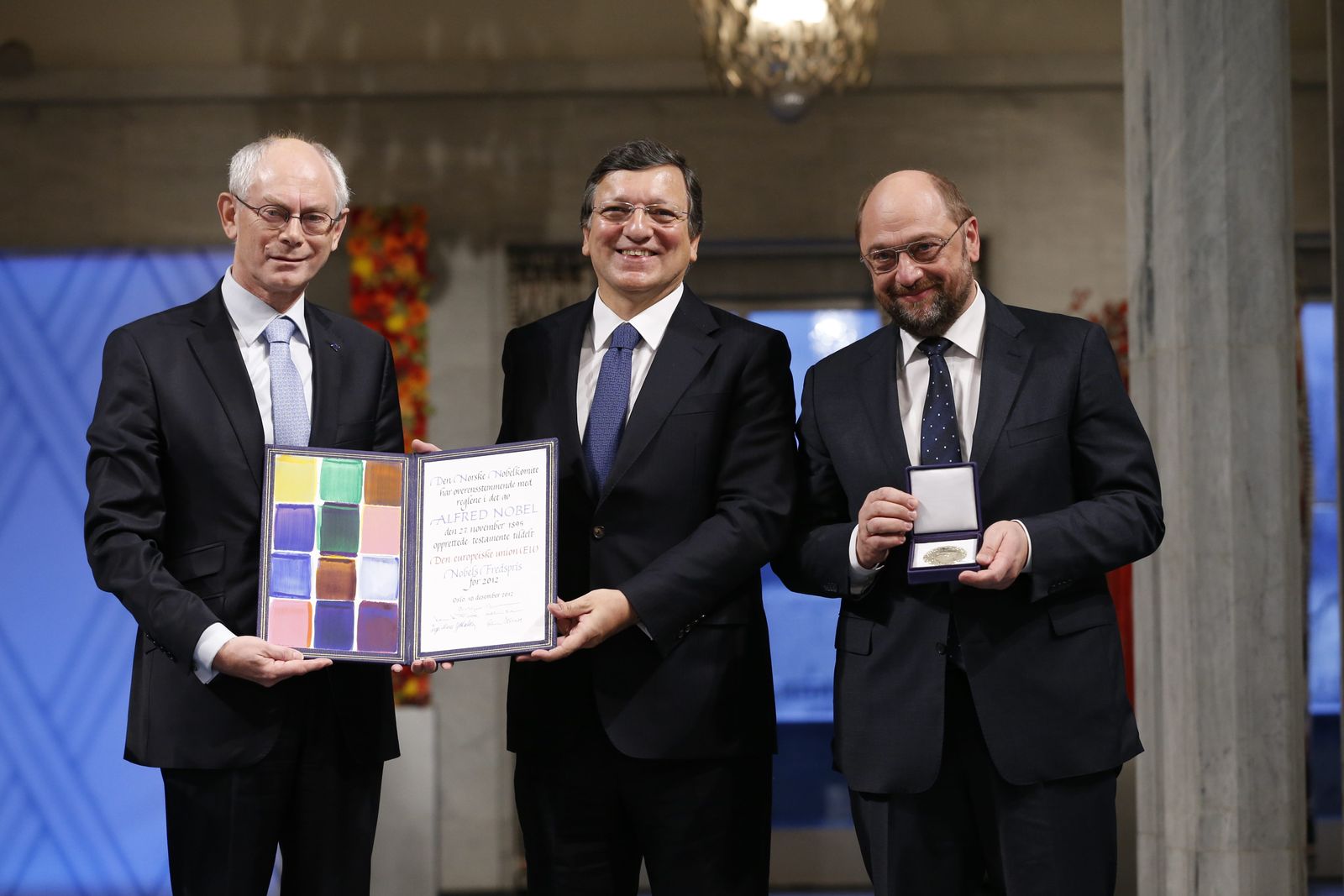 The EU's three highest representatives pose with the Nobel diploma.