SPIEGEL: Mr. Schulz, you have been a member of European Parliament for 21 years. During that time, has the European Union ever been in as poor shape as it is today?

Schulz: No. Unambiguously no! Europe hasn't failed yet, but the situation is extremely concerning.

SPIEGEL: What exactly do you mean?

Schulz: Europe was founded as a community bound together by solidarity. Member states agreed to work together closely because they knew that together, we are stronger. Now we are experiencing a wave of eroding solidarity, first of certain societies and then entire governments. At the same time, we have two giant new challenges to meet: the migration movement and terror. And then Great Britain is thinking about leaving the EU. That should suffice as a description.

SPIEGEL: An article of faith in EU politics has long been that Europe grows closer together in crisis. Now, the opposite seems to be true.

Schulz: We are in the middle of a tough, ideological conflict that is being waged across the entire continent. On the one side are those who say that global challenges like migration and terror cannot be met with national parochialism. On the other side are those who would like to see a renaissance of the nation-state.

SPIEGEL: We suspect you belong to the first group, the minority.

Schulz: I believe that the majority of people in Europe want to demonstrate solidarity with the refugees. We have seen that in the overwhelming willingness to help. Sometimes one gets the impression that the people are much more advanced on this question than their governments.

SPIEGEL: If you talk to people from Poland, Denmark or France, their desire to help refugees is just as limited as that of their governments.

Schulz: Particularly in periods of crisis, governments have the obligation to lead by good example! Instead, many in Europe are confronting this global challenge with a penny-pinching mentality that drives me crazy.

SPIEGEL: Germany seems to be rediscovering the EU again in exactly the moment that the country is facing such pressure from the high number of refugees flowing into the country. When the focus was on the euro and the Greeks, the German government had a completely different demeanor: arrogant and uncompromising.

Schulz: Not the entire government ...

Schulz: Only those who were recently content to flex their muscles in Germany -- and who were extremely eager to force others to follow the German model. It may be cynical, but it's payback time in Brussels and Germany is bearing the consequences for this behavior. Angela Merkel took a courageous step on the refugee issue ...

SPIEGEL: ... and she is being faced with significant headwind in Brussels.

Schulz: The stubborn stance of some European governments on the refugee question is a reprisal less aimed at Angela Merkel or (Vice Chancellor) Sigmar Gabriel than at certain people on Wilhelmstrasse in Berlin.

SPIEGEL: Which is where Finance Minister Wolfgang Schäuble has his office.

Schulz: He is, for many, a controversial figure.

SPIEGEL: The German finance minister demands that our European partners follow the rules, such as the Stability and Growth Pact. What's wrong with that?

Schulz: Of course the rules apply. But if you constantly insist only on your own interpretation, it isn't long before it seems patronizing. Following the attacks in Paris, French President François Hollande has a completely different set of concerns. France needs more police, more security personnel and a greater emphasis on integration. He says that security is more important than the Stability Pact.

Schulz: It is a European problem and solidarity is the fundamental idea of European cooperation. If a country feels itself to be militarily threatened and calls for soldiers, weapons and sanctions, then that's what it gets. When governments say they need money from the structural funds to stabilize their economy, that's what they get. But you can't cherry pick solidarity.

SPIEGEL: Still, Angela Merkel's decision at the end of August to open up the borders to Syrians was very unilateral. There was no warning given to, nor consultation with, Germany's neighbors.

Schulz: Certainly Ms. Merkel could have communicated more effectively with the French and the Poles. At that moment, we were facing an acute humanitarian crisis situation that demanded immediate action. But that isn't the core of the problem. We all have to accept accusations that we ignored the refugee crisis for far too long. The first time that I referred to the Mediterranean Sea as Europe's cemetery was in October 2013, when hundreds of people drowned off Lampedusa. Italians, Maltese, Greeks and Spaniards have been pleading for help for years. But nobody cared. The answer was always that we had the Dublin Regulation (which stipulates that all asylum applications must be processed in the country where a refugee first arrives) and that the Italians needed to conform to it.

SPIEGEL: And how can we get Eastern European countries to show more solidarity?

Schulz: At the moment, it's like this: We have committed ourselves to pursue joint policies, but then national governments say, "We aren't bound by that." That is a dramatic situation, because solidarity is a basic principle that cannot be had on an à la carte basis. If we have rules that nobody adheres to, then the community will break apart.

SPIEGEL: Among the German populace, there is little understanding for the fact that Germany is the largest net contributor to the EU (meaning it pays more in than it gets back in subsidies), yet Eastern European member states refuse to accept any refugees in return.

Schulz: There are ways to demand solidarity. One example: The new Polish government would like more EU funds for its farmers. Medium-term financial planning requires unanimity. Those who want something will have to offer something in return -- such as solidarity in the refugee question, for example. That is why the medium-term financial planning is a chance to return to a joint approach.

SPIEGEL: Or to have a falling out.

Schulz: It is more an opportunity to correct mistakes. When we were negotiating the ongoing financial period in 2013, I talked myself hoarse. London and Berlin in particular insisted on reducing the budget. So we -- to the applause of German journalists -- made cuts to central future-oriented areas and slashed the budget for development aid, research and technology. And now? Now we have the problems and need money for Africa, Jordan and Turkey.

SPIEGEL: Money is hardly the most pressing problem. Months ago, the EU agreed on the distribution of 160,000 refugees currently sheltered in Greece and Italy. Thus far, though, only 200 people have been redistributed.

Schulz: That is unfortunately true. We now have two options: We can commence operations at the Hotspots in Italy and Greece and continue to do nothing -- in which case they would soon be overflowing. Or we can show responsibility and organize a distribution system that takes into account the limits of each individual member state. Migrants, for their part, must recognize that, while they have a right to protection, they do not have the right to freely choose the country. In addition, it is clear: Not everybody can come to us.

SPIEGEL: Are quotas -- the commitment to bring a certain number of people from their countries or from refugee camps directly to Europe -- a possible solution?

Schulz: The quota idea is a good one, but there are two problems with it. The first is clear: A quota system would also require all European countries to be prepared to take refugees. And secondly: What happens when the quota has been filled? Would we then simply tell those who are threatened, sorry but we have to send you back?

SPIEGEL: But that is exactly what Chancellor Merkel is negotiating with Turkish President Recep Tayyip Erdogan: Quotas with an upper ceiling.

Schulz: We are negotiating something completely different with Turkey. Turkey is doing an enormous amount in the refugee question, but it can't continue to pay for everything by itself. That is why we have to talk to Turkey about money.

SPIEGEL: The deal, then, is that Turkey would receive billions from the EU and in return is supposed to close off its western borders.

Schulz: That isn't a deal, that is a necessity that is advantageous for Turkey, Europe and, most of all, the refugees. Refugees cost us money too when they come to us. If we improve their living conditions in Turkey, we create an incentive for them to stay there and not to place their fates in the hands of smugglers.

SPIEGEL: Why should Erdogan go along with the plan?

Schulz: Erdogan is an adherent of realpolitik. He knows that international relations are not built on the strength of unilateral demands, but on solutions that are in everybody's best interest. Turkey has in interest in finding agreement on more permissive visa requirements, it wants to be recognized as a safe country of origin and it wants to finally return to constructive EU accession negotiations. We Europeans decide all of those things together.

SPIEGEL: European solidarity is also being tested on another issue. Soon, the question will be addressed as to whether sanctions on Russia should be extended or not. Do sanctions still make sense when we need Russia in the fight against Islamic State?

Schulz: I believe it is wrong to now give Moscow a rebate on Ukraine sanctions because of Syria. Russia must implement the Minsk Protocol and adhere to the cease-fire in eastern Ukraine. That is the benchmark, unless we want to lose what's left of our credibility. That has nothing to do with the refugee crisis.

SPIEGEL: Do the Russians have any interest at all in helping us fight Islamic State terror, particularly after the shooting down of their military jet?

Schulz: It was a Russian airplane that was bombed over the Sinai Peninsula. When the Russians conduct air strikes on IS, they are doing so because they too are threatened by terror.

SPIEGEL: Thus far, though, the Russian air force has hardly conducted any air strikes against IS, focusing instead on those groups fighting against Syrian dictator Bashar Assad. That is hardly a promising foundation for cooperation.

Schulz: That, unfortunately, has been the case so far. We have to change that step-by-step. If we want to defeat Islamic State, we first have to arrive at a cease-fire agreement in Syria. Once that has been achieved, an anti-IS coalition can be assembled, including Russia, Saudi Arabia and Iran. That, however, will be significantly more difficult in the wake of Turkey's downing of the Russian plane.

SPIEGEL: How credible is such a foreign policy? Just recently, Russian President Vladimir Putin was seen as the "bad guy." Now we are trying to win him over as a partner as quickly as we can.

Schulz: Politics is a dynamic process. When I was a young man in the 1970s, Yasser Arafat had just perpetrated various terrorist attacks. Just a few years later, after I had entered European Parliament, the same Yasser Arafat was given the Nobel Peace Prize. 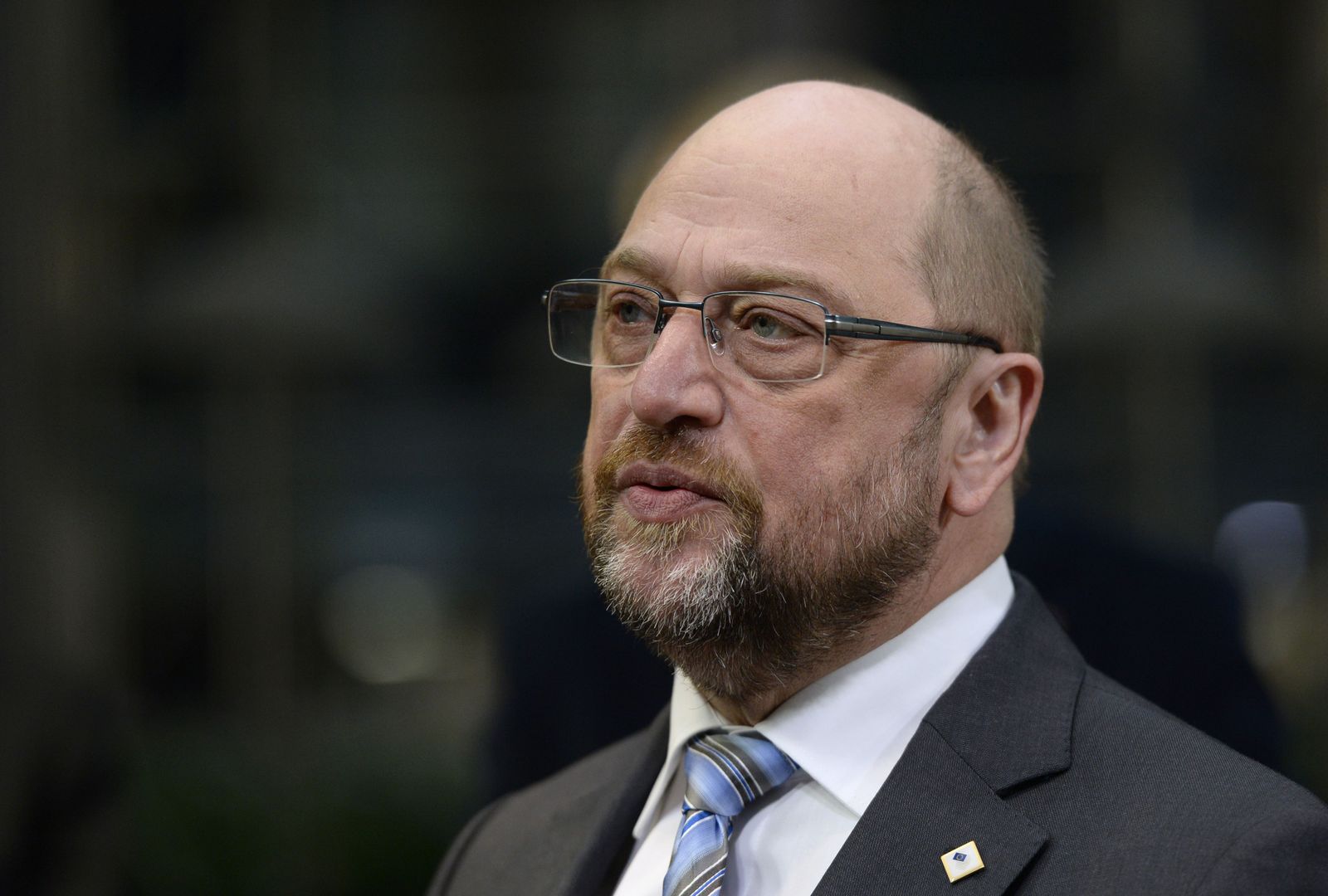