Seán Ó Riain wants you to sing the European Union anthem in Esperanto, the international language. And he's willing to bet that there are a million other EU citizens who agree with him.

"It can strengthen solidarity across Europe and give citizens a sense of pride in our common European endeavour," said Ó Riain. "This can have important political consequences."

In order to fulfill his dream, Ó Riain was one of the first people to register a European Citizens' Initiative (ECI), a program that was launched on April 1. "I filled out the online form between midnight and 1 a.m. on the day it went live," he said.

The new initiative allows EU citizens to petition the European Commission, asking it to consider drafting specific legislation. It's a rigorous procedure, requiring independent international initiative committees to gather 1 million signatures from voting-age citizens across the member states. But it's also a remarkable exercise in direct democracy, since only 12 of the 27 member states allow citizens the same right with their own national legislatures. Done properly, it could provide Europe with something that it desperately needs -- a public sphere.

But done incorrectly, the initiative could be derailed by wacky proposals, or could be subverted completely by moneyed interests. The supporting committee for the Esperanto initiative has some esteemed members, including the German Nobel Prize-winning economist Reinhard Selten, but many EU citizens may be wondering -- is the initiative process really the right way to get me to sing, "Kantu kune amikaro, Ni la gojon festas nun," to the tune of Beethoven's Ninth Symphony? (Those are the first two lines of the European anthem, "Let us sing together, friends, Let us celebrate our joy.")

'One Euro Per Signature'

Fortunately, EU citizens are the ones who will have a chance to decide which proposals deserve their attention. Less fortunate are the costs associated with submitting a serious proposal (other newly filed initiatives include ones on water protection; the establishment of a pan-European educational credential; and a call for a financial transaction tax). Once a proposal is filed, the European Commission has two months to approve or reject it. Once it's approved, committees have only 12 months to get 1 million valid signatures.

To complicate things even more, there must be a minimum number of signatures from at least seven different member states (74,250 from Germany, for example). Carsten Berg, director of the ECI campaign (a coalition of more than 120 European democracy groups and non-governmental organizations), estimates that getting the signatures will cost about €1 million.

"I usually tell organizers that they have to calculate about one euro per signature," Berg said. "That's been the example in other countries with direct democracy initiatives, like Switzerland. Even if you do a lot of online signature collecting, when you add up the costs of advertising, education, translation, verification -- it becomes quite a lot, especially for unknown issues."

One million euros will put the initiative process out of reach for many small, grass-roots organizations, let alone the average citizen who just happens to have a good idea. The experience in other places with this sort of direct democracy shows that the hurdles of time, organization, and money make the initiative process easier for large corporations or well-funded interest groups.

The US state of California, for example, has had a direct citizens' initiative process since 1966, but few initiatives come from small, grass-roots groups. Instead, the short five-month window to collect hundreds of thousands of signatures has resulted in an initiative process dominated by well-funded corporate and political interest groups. Governmental study groups have recommended that California reduce the number of signatures required and lengthen the amount of time for signature collection, should the state wish to see citizens' initiatives that are actually sponsored by citizens.

Greatest Risk from the Commission

"Twelve months is really not enough time," said Berg. "With Switzerland's initiative process you have 18 months to collect signatures, and that's just one country." The EU Commission could help groups with some of those costs, or offer them infrastructure support for collections. But it hasn't made any assistance available.

Organizations are also concerned about the initiative's data collection requirements. Many member states require a great deal of personal data from signatories in order to verify their identities -- not just names, phone numbers, and addresses, but also passport or identity card numbers. Greece, noted Berg, even requires signatories to list fathers' names. "Unless you can guarantee privacy and security to people, and at this point they can't, I think it will be a huge disincentive for citizens to sign anything," Berg said.

Finally, the greatest risk to the initiative may be the Commission itself. The process only binds the Commission to consider proposing legislation. It can choose to look at proposals that have been painstakingly assembled from one million citizens in multiple member states and decide that it has no interest in pursuing them.

Not every expert believes that the initiative process will be a disaster, however. Ulrike Guérot, a senior policy fellow at the European Council on Foreign Relations, says that "the initiative opens a great possibility." She is not very worried about the burden of the regulations.

"I actually do not think that the regulations are too difficult," she said. "There are, indeed, heavy requirements, but this is obviously to avoid misuse."

Guérot added that there will be frustrations: "I can imagine that language barriers will be a hurdle to many." But looking at the bigger picture, she said, may help to see the initiative process in a different light. "If the initiative triggers both a reason and an occasion for European citizens to engage across borders, and in a trans-national way -- and this is precisely the idea, to create a new democratic identity for Europeans, by helping them discover that they share the same problems, concerns, challenges -- then the goal will be fulfilled."

But Guérot's argument about the big picture may be cold comfort to organizations that get mired in the details of the process. The environmental organization Greenpeace offers a cautionary tale. The citizens' initiative process is included in an article in the Lisbon Treaty, which was signed in December 2009. In March 2010, Greenpeace launched an initiative against genetically modified crops, in response to the Commission's approval of the first such crop in 12 years. Greenpeace believes that its initiative met the requirements -- it collected 1 million valid signatures within seven months, and met the minimum threshold for signatures in 12 different member states. The Commission has rejected the Greenpeace initiative, saying it was submitted before the initiative process was formally launched in April 2012. The fight may be over a technicality, but Greenpeace thinks it could be a bad sign for the future of the initiative process.

Of course, the Commission can only consider proposals on issues where it has the power to propose legislation -- which means that many initiatives will be rejected out of hand. But there is a real question about how encouraging the EU will be towards the initiative process. European Commission President José Manuel Barroso doesn't mention it much. Civic organizations, including Democracy International, lobbied the EU constitutional convention for an initiative process for a decade. During that time, many members of the European Council reacted with strong resistance. Even today's strict regulations are weaker than those the European Parliament and Council originally wanted, which included a requirement of 300,000 signatures before the Commission would even study the eligibility of an initiative. And the Commission is still not offering any help with funding or translation to any committees.

Despite these challenges, advocates for direct democracy are optimistic about the initiative process. Maybe they should be -- it's still the first opportunity EU citizens have had to band together and demand action on policy changes that affect them all.

Seán Ó Riain, for one, is pleased about the way the initiative process has begun. "The submission process worked well," he said. His committee has already begun thinking of ways to collect signatures. "There's a national Esperanto association in every member state, so that could work to our advantage," he said. "There's a whole worldwide network of Esperanto speakers to draw on. This could be big." 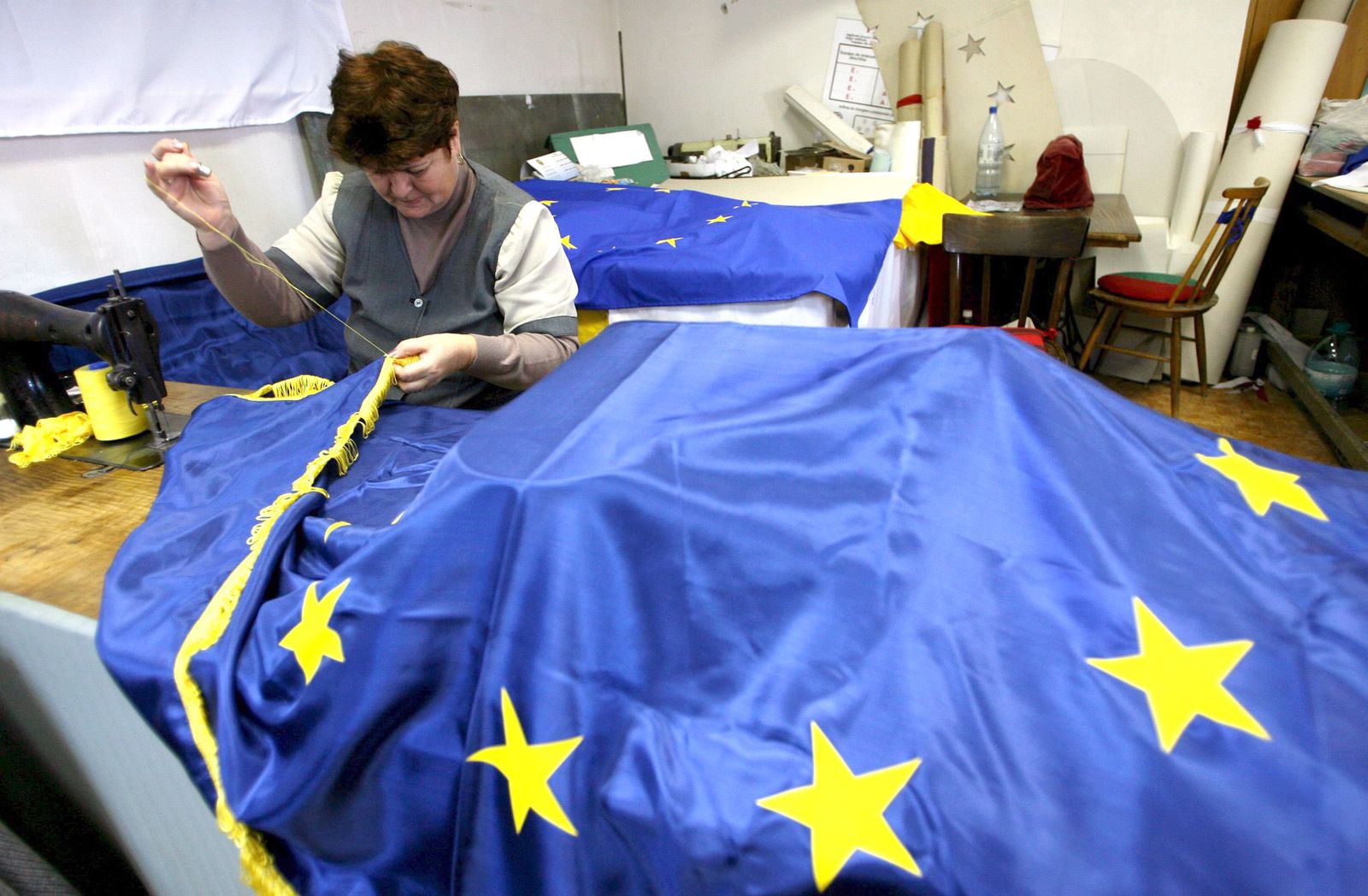 The European Union is allowing citizens more of a say. But will it work?