"We finished first, without winning." That's how Democratic Party head Pier Luigi Bersani on Tuesday summed up the results of the Italian election, one which left his center-left camp with an edge in parliament but without sufficient leverage in the Senate. What he didn't say is that the biggest loser ultimately might not be in Italy at all. The biggest loser could be Europe and its efforts to finally emerge from years of crisis.

Those concerns were highlighted on Tuesday as stock and financial markets around the world made clear their discomfort with the political chaos in Italy that has resulted from the deadlocked vote. And more bad news could be on the horizon. The ratings agency Moody's indicated on Tuesday that it may downgrade Rome's credit rating in the wake of the election.

"Instead of increasing visibility on the country's political direction, Italy's recent elections raised the risk that the structural reform momentum achieved under the government of Mario Monti will stall, if not come to a complete standstill," Moody's wrote in a Tuesday report. The agency said it would downgrade the country from its current Baa2 rating -- just two levels above junk status -- if reform efforts wane.

It is hardly an idle concern. The Five Star Movement of former comedian Beppe Grillo emerged as the strongest single party from the election, primarily on the strength of his disdain for the political class and his unrelenting anti-European Union and anti-austerity rhetoric. Silvio Berlusconi, though he lost 4 million voters relative to his 2008 result, was also surprisingly strong -- due in large part to his own rants against the EU and, in particular, against German Chancellor Angela Merkel.

When leading European politicians finally caught their breaths on Tuesday, reactions -- fed by an unmistakable concern that political stasis in Rome could reignite the euro crisis -- were harsh.

"To a certain degree, I am horrified that two clowns won the election," Peer Steinbrück, Germany's former finance minister and the Social Democratic candidate for chancellor in autumn elections, said on Tuesday evening, referring to Berlusconi and Grillo. He said the vote will "contribute to greater problems in the euro zone." Italian President Giorgio Napolitano, in Germany for a visit, promptly cancelled a planned meeting with Steinbrück as a result of the comment.

But German Foreign Minister Guido Westerwelle likewise gave voice to deep concerns on Tuesday, telling reporters in Berlin "it is now decisive for Italy, because it is such an important country for the whole of Europe, that a stable and effective government can be formed as quickly as possible."

Finance Minister Wolfgang Schäuble added that "the onus is now on political leaders in Italy to … do what the country needs, namely form a stable government that continues on the successful path of reform."

Indeed, several leading Europeans on Tuesday urged Rome to continue on the reform path embarked on by outgoing Prime Minister Mario Monti, the technocrat leader who took over from Silvio Berlusconi in the autumn of 2011. Monti's party, however, experienced nothing short of a debacle in the election, receiving a paltry 10 percent of the vote -- a clear signal that there is little appetite in Italy for further austerity.

"I assume the Italian government, no matter how it may be composed, will stick to its European commitments," Dutch Finance Minister Jeroen Dijsselbloem, who is also head of the Euro Group, said on Tuesday, adding that there was "no rejoicing" following the election. "A stable government is important to the euro zone. To pull Europe from an economic quagmire, stable politics are required, also in Italy," he said.

Spanish Foreign Minister Jose Manuel Garcia-Margallo was less diplomatic. The result, he said was "a jump to nowhere with positive consequences for nobody."

The markets on Tuesday made clear that investors shared such concerns over Italy. The stock index in Rome plunged by 5 percent and trading in some bank shares had to be suspended due to precipitous share-price falls. Interest rates on 10-year sovereign bonds, the canary in the euro-crisis coalmine, rose to 4.83 percent ahead of a Wednesday debt offering. European and global markets also suffered on Tuesday, with Germany's DAX shedding 2.3 percent.

That, though, isn't likely to impress Italy's leading populists. Berlusconi discounted investor concern on Tuesday, saying "markets go their own way. They are independent and also a little crazy." And Grillo? During the campaign, he called bond spreads a "hallucination."

He also seemed to welcome economic upheaval, saying it will force new elections. Any possible coalition pairing Bersani and Berlusconi, he said on Tuesday, would last but "seven, eight months. The economy won't let them escape." 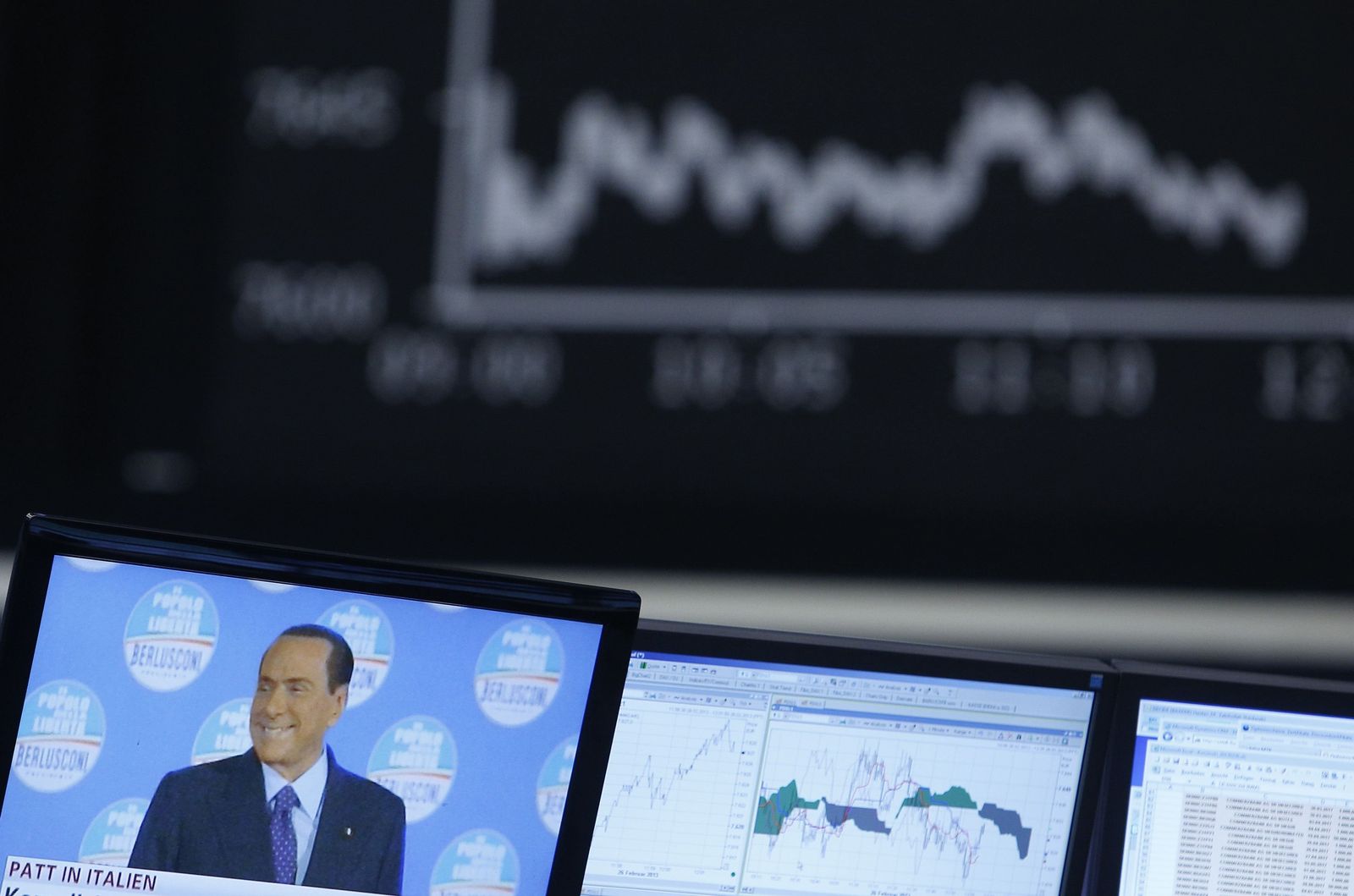