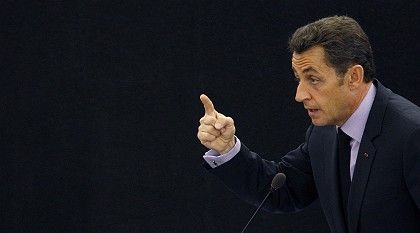 In a speech before the European Parliament on Tuesday, French President Nicolas Sarkozy suggested that European countries establish their own sovereign wealth funds to take ownership stakes in key industries. He went on to suggest that European states should coordinate their industrial policies with each other.

As the financial crisis morphs into a wider economic crisis, Sarkozy stressed the need for European states to sustain their coordinated approach. "The economic crisis is here," said the French president. Although Sarkozy argued strongly for a unified response to the problem, he stressed that this didn't mean that every country needed to pursue the same policy. "We don't all need to do the same thing, but we do need to coordinate amongst ourselves and come to an agreement on certain issues." Sarkozy underlined that it would require concerted action among EU countries to ensure that Europe is a place that continues to build "ships, planes and cars."

In his speech Sarkozy called upon European states to set up sovereign wealth funds to help prop up companies listed on European stock exchanges. Otherwise, he said, there is a danger that tanking stock prices will result in a massive sell-off of European assets to foreigners. "I don't want European citizens to wake up in a few months and discover that European businesses are now owned in capitals outside of Europe." He added that the state funds could later sell their stakes at a profit.

Sarkozy's use of the term "sovereign wealth funds" to describe his proposal was deliberate. Most sovereign wealth funds are controlled by petrocash rich nations, like Russia and the Gulf states, and there are concerns in many European nations that with their amassed wealth, they could go on a shopping spree and snap up Europe's tradition-steeped companies.

The French president also reinforced his appeal for help for European automakers, pointing to the recent bailout of the car industry in the United States. European auto companies cannot be allowed to suffer a competitive disadvantage, Sarkozy argued -- especially at a time when carmakers are being forced to reorganize their production systems in order to comply with climate change targets. "We can't be naïve, we must protect our industry," he said.

He also lamented the absence of an administrative vehicle for coordinating industrial and economic policies within the euro zone. "We don't have any economic government worthy of the name. We can't go on like this," implored Sarkozy.

Such an "economic government," he noted, would have to work closely with the European Central Bank (ECB). "The ECB must be independent but must also be able to hold discussions with an economic government," he said. The euro zone's 15 member states would work alongside the central bank in coordinating economic policy. He emphasized that such coordination would not have to interfere with an independent monetary policy.

Sarkozy has long favored establishing an economic administrative arm for the euro zone. Until now, though, he has largely stood alone. Germany, in particular, has opposed such a move out of concern for the independence of the ECB.