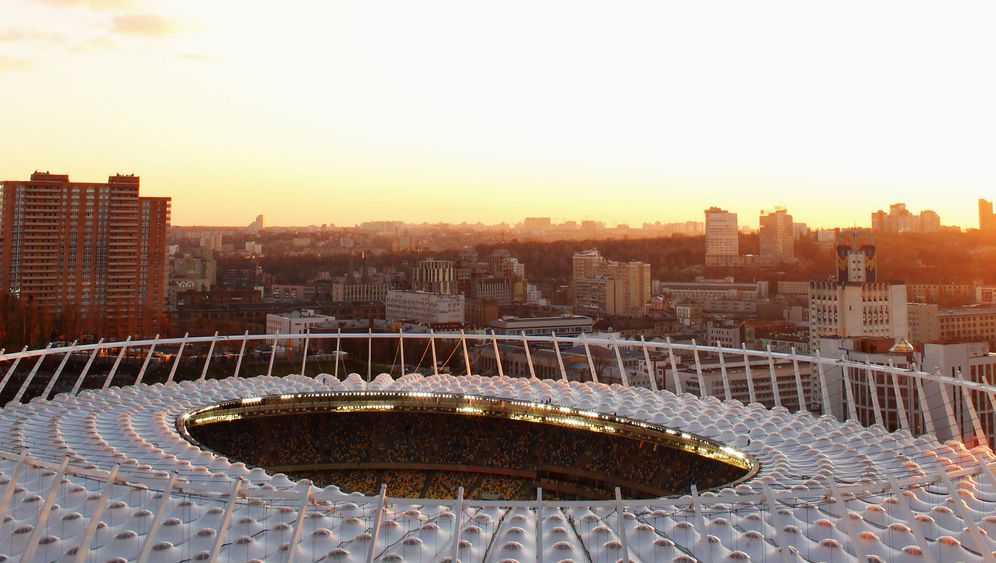 The Slavutich Hotel is a dismal, Communist-era prefabricated structure on the banks of the Dnieper River, which divides the Ukrainian capital, Kiev. Visitors to the city tend to steer clear of the Soviet-era monstrosity, which currently has only one-tenth of its 400 rooms occupied.

Still, the hotel is attracting significantly more attention in other places -- especially in mafia circles. A few weeks back, masked men wielding clubs and shields stormed the hotel's lobby and brought it under the control of the "Lushniki" gang, a criminal syndicate notorious for contract killings whose membership once included the man who assassinated Russian investigative reporter Anna Politkovskaya in 2006. In the hotel, the attackers beat employees and shot a guest.

But the victims of the attack weren't limited to those in the hotel. Another was located more than 1,500 kilometers (900 miles) to the west: TUI, the German travel giant that has rented out more than 14,000 rooms in Ukraine for the 2012 UEFA European Football Championship, which will be staged in Ukraine and Poland from June 8 to July 1. And then there are the tens of thousands of soccer fans who were planning to travel to Ukraine for the tournament. The hotel's new proprietors broke off its contract with TUI and doubled the prices for rooms during the championship.

This strong-armed takeover of the hotel highlights the conflict that has been waged behind the scenes for weeks -- and that TUI, UEFA and Ukraine have been trying to keep out of the news. Indeed, the Slavutich Hotel is just one of many that have broken their contracts with TUI just two months before the tournament is scheduled to kick off. "Dozens of hotels want to set higher prices, or they get out (of their contracts)," said one TUI employee in Kiev.

Caught in the Middle of a Turf War

This squabbling over rooms is just one in a series of scandals to have emerged in the run-up to the European Championships.

TUI is caught in the middle of a turf war in Ukraine. In late January, masked assailants raided the Tourist, a massive 27-story hotel in Kiev, where they stayed until police finally succeeded in driving them off. Guards wearing military fatigues protect the entrances of the Hotel Mir, a TUI partner hotel whose name means "peace," for fear that it might suffer a hostile takeover like the Slavutich Hotel did.

TUI and UEFA, the sport's European governing body, have been trying to reassure potential visitors, saying that there is only "a small number" of problematic hotels. But 11 hotels have already broken their agreements with TUI in Kharkiv alone, a city roughly 500 kilometers east of Kiev that will host three matches, including one in which the German national team will play. The move affects more than one-third (1,139 of 3,204) of the rooms that the travel operator had originally booked. Meanwhile, the Hotel Baden-Baden is now asking for €160 ($210) rather than €65 a room per night. The three-star Hotel Victoria has bumped its rates from €94 to €300.

More than Just a Problem with Hotels

Still, TUI employees based in Kiev believe the company is shying away from filing lawsuits against the renegade hotels given the slim prospects for success in the country's notoriously corrupt court system. Ukraine had been expecting that the up to 1 million soccer fans drawn to the tournament would be a boon to its tourism industry and the country's ailing economy. But now the government fears that exorbitant prices will keep many fans away.

Deputy Prime Minister Boris Kolesnikov warns that the greed of hotel owners could ultimately deprive the entire country of potential revenue. Similarly, Markiyan Lubkivskiy, the official overseeing preparations for the parts of the tournament hosted in Ukraine, has said, "It won't work to try to make enough money for the rest of one's life." But such appeals for moderation have fallen on deaf ears.

Indeed, when it comes to making a quick buck, it would appear that even the government is only slightly less ruthless. Although the tournament's official slogan is "Creating History Together," thousands of cosmopolitan students will not be able to attend its matches. Nina Kutusovskaya, a 19-year-old biology student at the Taras Shevchenko National University of Kiev, speaks fluent English and would have liked to work as a volunteer during the tournament. But, instead, she'll soon be forced to pack her bags.

In late May, Kutusovskaya will have to take the lovingly handmade cloth butterflies out of her drapes and hope "that no drunk fans ruin my wallpaper." The university's administration is forcing students to abandon their dorms for the duration of the tournament. The 10-square-meter (107-square-foot) room that Kutusovskaya shares with a friend for the equivalent of €16 a month will be rented out to customers with deeper pockets for €80.