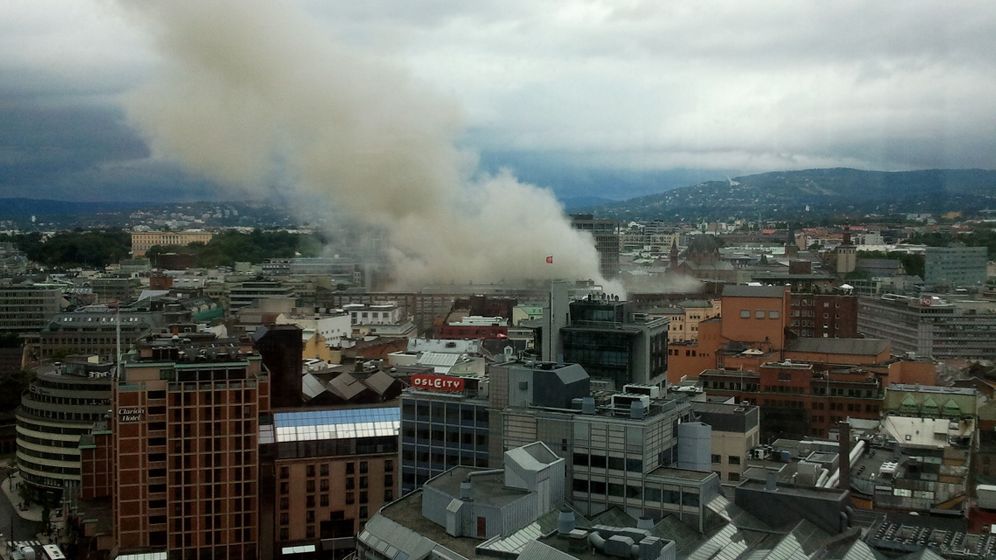 The people of Norway were in a state of shock on Friday evening following twin attacks which have shaken the normally peaceful Scandinavian nation to its core.

A violent explosion in central Oslo on Friday afternoon killed at least seven people and wounded at least 15. That was followed by a shooting incident on the island of Utoya outside the capital which left at least 9 people, and as many as 20, dead.

Speaking after the blast, Prime Minister Jens Stoltenberg said the situation was "very serious." He spoke in a telephone call to the Norwegian TV2 television without revealing his location, having been advised by police to keep his whereabouts secret.

Images from the scene showed streets full of debris from the explosion and buildings with all their windows blown out. Clouds of smoke hung over the city center. Police have closed off streets leading to the site. The Oil and Energy Ministry and the office of Norway's largest tabloid newspaper, VG, were also badly damaged.

Just a few hours after the explosion, it was reported that a shooting had taken place on the island of Utoya at a youth camp organized by the governing Labor Party. Local media reports said that a man in police uniform opened fire. Police said the suspected shooter had been arrested. The man was said to be linked to the bomb attack. Police said the suspect, who was said to be of Nordic appearance, had been seen in Oslo before the explosions, prompting speculation that the man might have been acting alone.

Police confirmed on Friday evening that at least nine or 10 people had been killed in the shooting incident, with some witnesses putting the death toll as high as 20. There were reports that people at the camp had panicked and tried to swim ashore from the island. Prime Minister Stoltenberg had apparently been due to make an appearance at the camp.

"There was a lot of shooting," a young woman at the camp told British television station Sky. "We hid under a bed. It was very terrifying." Around 600 people, mostly teenagers, were thought to be taking part in the camp.

Norwegian Foreign Minister Jonas Gahr Store told the BBC that the country was in "deep shock." He said that the government would have to relocate within Oslo because of the bombings, but insisted that Norway would not abandon its "core values of democracy."

Observers are puzzled as to the timing of the explosion, which did not appear to make sense if the aim was to kill as many people as possible. Friday was a public holiday in Norway, meaning that there were fewer people in government offices than would normally have been the case.

World leaders have condemned the violence. German Chancellor Angela Merkel said she was "appalled" when she heard about the attack in Oslo. "All of us who believe in democracy and peaceful coexistence must strongly condemn such terrorism, whatever its motives," she said in a statement. European Council President Herman Van Rompuy said he was "deeply shocked" by "these acts of cowardice," while US President Barack Obama also expressed his condolences to Norway.

No group initially claimed responsibility for the attack. On Friday evening, the New York Times reported that the terror group Ansar al-Jihad al-Alami (Helpers of the Global Jihad) was claiming responsibilty for the Oslo bombing. "It is difficult to imagine this not being a terror attack," said Norwegian terror expert Tore Bjørgo.

Norway has faced several homegrown terror plots in recent years linked to al-Qaida. Last week, an Islamist cleric in the country was charged for making death threats against Norwegian politicians should he be deported from the country. There are over 400 Norwegian troops currently stationed in Afghanistan as part of NATO operations there.

Al-Qaida has long warned of a revenge attack in Scandinavia ever since a Danish newspaper published caricatures of the Prophet Muhammad over five years ago. In its propaganda, al-Qaida makes little distinction between the Scandinavian countries. There have been several attempted attacks against Muhammad caricaturists in Denmark. Last December, a suicide bomber with ties to radical Islamists blew himself up in the Swedish capital Stockholm, though nobody was injured in the explosion.