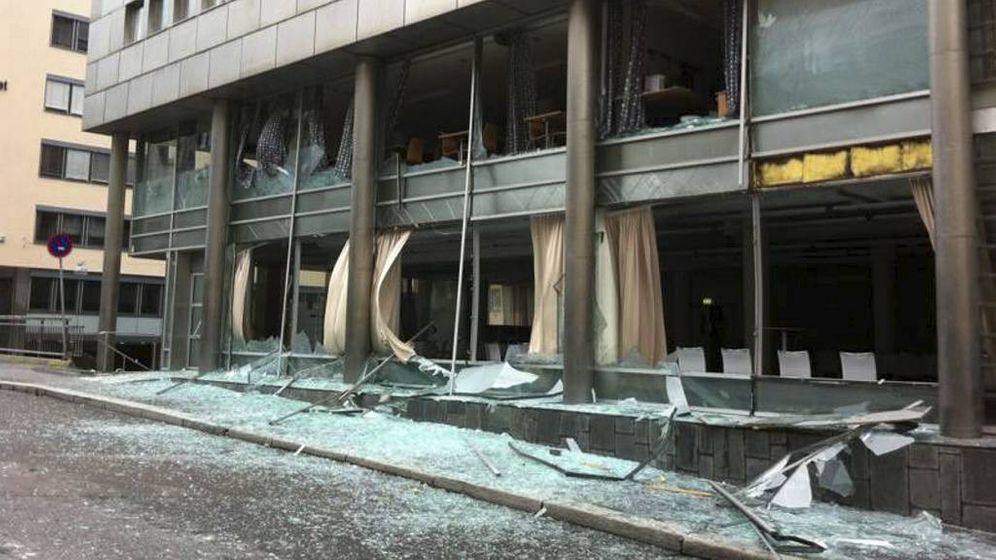 The center of the Norwegian capital Oslo was a scene of devastation on Friday afternoon following a violent explosion which killed at least two people and injured several. Police confimed that the blast was caused by "one or more" bombs and urged people to leave central Oslo.

The explosion blasted windows out of buildings in the city's government quarter. Prime Minister Jens Stoltenberg was safe, however, according to a government spokeswoman. The prime minister was not in the government building when the explosion happened.

"This is very serious," Stoltenberg later told Norwegian TV2 television in a telephone call. He did not disclose his location, explaining that police has advised him against doing so, but said that all government ministers appeared to be safe. It was too early to say if the explosion was a terrorist attack, he said.

Several government buildings were damaged in the explosion, which happened at 3:26 p.m. local time and was heard for kilometers around. The Norwegian newspaper Aftenposten reported chaos in the streets near the site and people covered in blood. "It smells like sulphur," one reporter at the scene said.

It seemed likely that the death toll would continue to rise. One reporter was quoted on the Aftenposten website as saying, "I saw dead people." Senior Norwegian government official Kristian Amundsen told the BBC that people were trapped in the buildings affected by the blast. The situation was the worst his country had seen, he said.

Images from the scene showed streets full of debris from the explosion and buildings with all their windows blown out. Clouds of smoke hung over the city center. Police have closed off streets leading to the site. Oslo police said the office of the broadcaster TV2 was sealed off after a suspicious package was found. The city's main train station was also evacuated by police.

There was at least one wrecked vehicle at the site, leading to speculation that a bomb may have been planted inside. No group has yet claimed responsibility for the explosion. Aftenposten has reported that officials are concerned that there could be additional bombs that have not yet detonated.

The building housing Norway's largest tabloid paper, VG, was also heavily damaged, a journalist from the Norwegian broadcaster NRK reported. She said she saw people lying "in pools of blood on the street." The newspaper's offices have been evacuated. Images shown by NRK showed the ground floor of Norwegian government headquarters -- a 20-storey highrise -- to be completely gutted.

"I was at the site just a few minutes after the explosion and saw countless injured people on the sidewalks and in the area of the government quarter," said Jarle Brenna, a journalist for the VG website.

Several terror experts have speculated that the blast could be the work of terrorists. "It is difficult to imagine this not being a terror attack," said Norwegian terror expert Tore Bjørgo. "This is Norway's greatest symbol of political power."

Norway has faced several homegrown terror plots in recent years linked to al-Qaida. Last week, an Islamist cleric in the country was charged for making death threats against Norwegian politicians should he be deported from the country. There are over 400 Norwegian troops currently stationed in Afghanistan as part of NATO operations there.

Al-Qaida has long warned of a revenge attack in Scandinavia ever since a Danish newspaper published caricatures of the Prophet Muhammad over five years ago. In its propaganda, al-Qaida makes little distinction between the Scandinavian countries. There have been several attempted attacks against Muhammad caricaturists in Denmark. Last December, a suicide bomber with ties to radical Islamists blew himself up in the Swedish capital Stockholm, though nobody was injured in the explosion.