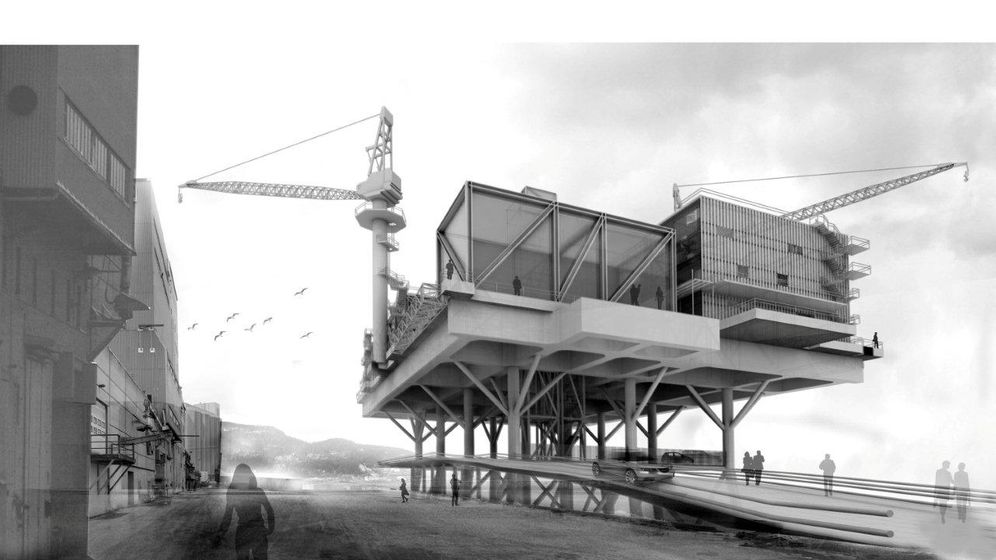 Sverre Max Stenersen says that the sweet smell comes from the dog food factory, but that people get used to it fairly quickly. He adds that Ila, this gruff neighborhood west of downtown Trondheim is actually a nice area. Really. Still, it's hard to trust this blond man, who is sporting a green parka. On this April afternoon, the area looks about as repulsive as it can get.

The brown-green water reflects the factory buildings in front of a grain silo climbing 70 meters (230 feet) into the sky. The inner harbor is empty save for a small coastal ferry and an orange rescue boat. Waves from Trondheimsfjord continually throw up spray over the quay wall. It's only rarely that you see any people. And it's hard to find any protection against the biting wind that whips rain around your ears. "The last two coffee places in the area closed half a year ago," Stenersen says.

Of all places, this is the one that the young Norwegian architect selected for the most exciting project he has ever undertaken. Indeed, he chose it precisely because it is so dead and so starving for a new beginning. Stenersen took the night train here from Oslo to present his idea in its original setting. If he gets his way, an obsolete oil platform will soon rise up out of the choppy waters of Ila's inner harbor to breathe new life into the area.

The oil platform is called Albuskjell 2/4-F, and it is currently located in the Ekofisk oil field in the middle of the North Sea. The platform started extracting oil in the summer of 1979, and at times it was home to up to 100 people. But it hasn't brought up any oil or gas since 1998 because the reservoir is empty. The high-rise-high facility is supposed to disappear from its current home on the sea by 2013 at the latest. "Only the concrete foundations are allowed to remain in place," Stenersen says. "The rest of the platform needs to be dismantled." ConocoPhillips, the platform's owner, says the disassembly process is already underway and that the work is supposed to already be completed in the summer.

Norway's territorial waters are home to roughly 100 major oil platforms. Stenersen figures that about a dozen of them are waiting to be dismantled. There are probably even more, he adds, because ConocoPhillips alone wants to remove nine facilities from those waters.

The fate of old offshore installations has been a major issue at least since the mid-1990s, when Shell's plans to dispose of its Brent Spar oil storage buoy at sea triggered massive protests. But now their disposal is regulated in Annex III ("On the Prevention and Elimination of Pollution from Offshore Sources") of the Convention for the Protection of the Marine Environment of the North-East Atlantic. The treaty is usually referred to as "Ospar" because its precursors were signed in Oslo and Paris.

Ospar's regulations are fairly stringent, in principle requiring that an oil platform be brought to land in its entirety and recycled after it has reached the end of its time in service. Oil companies proudly point to recycling rates of up to 98 percent. But Stenersen doesn't want to see Albuskjell 2/4-F simply cut into pieces and carted off to some scrap heap. Instead, he believes the awe-inspiring platform could actually help revitalize the western part of Trondheim.

Stenersen also hopes it will remind Norwegians of where their wealth comes from. Indeed, in recent years, oil and gas have made the country so prosperous that it turns the rest of debt-plagued Europe green with envy whenever it glances north. A state sovereign wealth fund administers the proceeds, which total around €400 billion ($570 billion). The people managing the oil assets control roughly 1.5 percent of all the world's stocks. Even so, Stenersen adds, hardly any Norwegians have ever seen an offshore platform with their own eyes. Even he hasn't, he admits, saying: "The money is raining down on us, and we don't know where it comes from."

With his project, Stenersen hopes to change all that. His plan involves having huge cranes dismantle the old platform in its current location into its constituent modules. Then the roughly 19,000-metric-ton giant will be reassembled like a gigantic Lego set on the edge of the Trondheimsfjord. One thing that will need adjusting, however, is the legs of the oil platform. At the moment, they hold the platform up in waters roughly 70 meters deep; but they will have to be shortened to match the depth of Trondheim's inner harbor, which is only about nine meters deep.

The city's dreary Ila quarter will surely benefit from the huge newcomer. Plans envision having a huge ramp that both people and cars can use to get up onto the 40-meter-high platform, which has a surface area of 3,500 square meters (approximately 38,000 square feet). There, the architect wants to stack seven stories on top of each other and to install permanent cranes that can allow for any future expansion or modification. "One could have apartments here or scientific institutes," Stenersen says.

"The best thing, though," Stenersen adds, "would be a place where the people of Trondheim could meet." Standing beneath his umbrella in the pouring rain, he is imagining a bustling marketplace like they have in Italy or Spain. "Maybe the thing could be heated with geothermal energy," he says. These are the kind of things you pine for on a stormy, rainy afternoon.

A Plan Stuck in the Fantasy Stage

Still, it's not clear just how realistic the chances are that Stenersen's dream will ever come true. A spokesman for ConocoPhillips says that platform could theoretically be moved to the Trondheimsfjord, but that someone would have to pay for it, and he declines to name a figure for how much the company would want for its steel scrap. Trondheim city officials haven't said anything about the ambitious plan. And Norway's Ministry of Petroleum and Energy hems and haws -- but still refuses to supply an answer.

The only option left to Stenersen is to look around for some donors with deep pockets. In a land sitting on an oil fortune worth €400 billion, one would think his chances are pretty good.