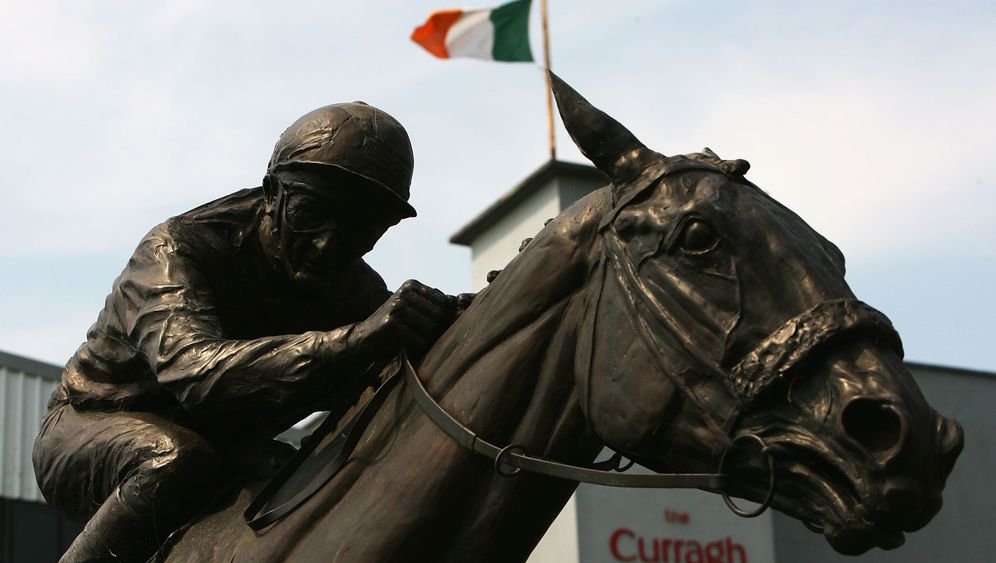 Before the crisis, Conor Dowling's callouts were usually for stray cats and dogs. That was in the good old days, almost three years ago, when Ireland was the booming Celtic Tiger and richer than ever before in its history. When his phone rings now, Dowling, an inspector for the Irish Society for the Prevention of Cruelty to Animals, gets ready to attach the horse trailer to his car. "70 percent of calls are about horses," he says. A stallion roaming across a street or galloping alongside a motorway. Or an abandoned racehorse found grazing on someone's lawn.

"We have a huge problem," says Dowling. His stables are full of horses that no one wants and it is becoming increasingly difficult to find new owners for them. "Hardly anyone dares say it aloud but we are going to have to put down a lot of these animals."

Ireland, which escaped decades of chronic poverty to enjoy an unprecedented boom, has had to apply for an EU bailout to stave off financial collapse. The plight of Ireland's horses illustrates the changing fortunes of this nation on the brink.

During the boom years, many Irish people indulged themselves. Entrepreneurs threw up new housing estates all over the island. Some took helicopters to fly from one building site to another. Then the crash came. More than 33,000 brand new homes and apartments stand empty in so-called "ghost estates" because no one can afford to buy them any more.

The damage done by real estate magnates and bankers threatens to push the country into the abyss. Crisis managers from the EU and the International Monetary Fund have flown to Dublin to take over the reins from Irish politicians. The nation faces rigorous austerity measures that will affect it for decades to come.

But the real estate and debt disaster has had a consequence that has so far attracted little attention: Animal welfare experts estimate that around 20,000 horses in the country are no longer wanted. Some of them are now roaming around the country after being abandoned by their owners.

They even include thoroughbreds that until recently were still being trained for racing. Many horses have been passed onto people who lack the ability, space and financial resources to take proper care of them. Scores of them are now grazing on pastures and are likely to die of hunger this winter, animal inspectors fear.

"The grass has lost all its nutrients by now," says Orla Aungier, manager of the Dublin Society for the Prevention of Cruelty to Animals. If no one provides the increasingly thin animals with hay, they will have virtually nothing to eat and will die in a matter of months.

Last year, 14 horses starved to death near Dublin. "It was a terrible sight," says Aungier. Her organization had to shoot or put to sleep 49 horses this year, more than ever before. They were emaciated, injured, sick or they had been mistreated. She found one horse with its entrails hanging out of a wound. The recession, says Aungier, has led to a dramatic deterioration in the way people treat horses.

During the boom, many of the 4.5 million Irish celebrated their prosperity by saddling up. Per capita, this nation of horse lovers owns the highest proportion of horses in Europe. Ordinary people clubbed together to buy thoroughbred racehorses to earn some money on the side. The animals became speculative assets, like real estate.

Things went well for a long time. Irish breeders were among the most successful in the world. The best foals would fetch up to €1 million ($1.3 million). Ordinary farms transformed themselves into stud farms and breeders turned out thoroughbred after thoroughbred, like lottery players, in the hope that they had the winning ticket.

'Endangering Our Reputation as a Horse Nation'

When the crash came, only the top breeders reduced the number of births. The others went on as before, and now, with the economy in the doldrums, they can't sell their animals. Many can't even afford to keep the horses. "It is a disgrace," says Aungier. "What's happening here is endangering our reputation as a horse nation."

At an auction at the end of September, rich foreigners were still paying up to €300,000 ($405,000) for top-quality thoroughbreds. But for the overwhelming majority of second-class and third-class horses, the market has collapsed. Owners lack the financial resources to feed them and for many there is only one solution, according to a study by University College Dublin -- they should be "humanely destroyed."

The country is even discussing setting up a national horse culling program, and an amnesty for all overstretched horse owners who blatantly breach animal protection laws. Owners of unwanted horses might be able to surrender them for disposal at no cost to themselves, says the author of the UCD study, Joe Collins, a vet. No decision has been taken yet. "But it is evident that something must be done soon," he says.

Only the Best-Fed Horses Are Slaughtered

A horse slaughterhouse in Kilkenny processed more than 3,000 horses last year, five times more than in 2005. Most of the horse steaks are exported to France.

But only well-nourished horses whose health has been comprehensively logged are allowed to be slaughtered. One wrong drug and the meat is labelled as unsellable. Contrary to EU rules, most Irish horses don't carry implanted microchips containing their most important data. So their remains can't even be processed into dog food. The absence of microchips also makes it impossible to track where an abandoned horse came from. That makes it tempting for troubled owners just to dump their horses by the roadside because it would cost €300 to have the animal put down and disposed of by a vet.

At the moment, the Irish government has other concerns. Hundreds of thousands of people stand to lose their jobs as a result of spending cuts, and an early election has been called for January.

At Dunsink, a townland near Finglas in North Dublin, some 140 ponies and mixed-blood horses graze peacefully next to the motorway on a former waste dump covered with thin grass. Their manes are matted and their hoofs badly neglected. The foals skipping around have slim prospects of surviving the winter.

In Ballymun, one of Dublin's poorest districts, owning horses is part of the local tradition. Children often ride around on them without saddles and the young riders stage impromptu races on the tarmac roads. Others hitch the horses up to two-wheeled carriages and whip them up to top speed. It's called "flashing.'" It doesn't seem to matter whether the horses' joints can stand up to the punishment. The police rarely intervene.

Market forces are worsening the plight of the horses. It is far cheaper to buy a new horse than to take a sick or injured one to the vet. At Dublin's Smithfield Market, on every first Sunday in the month, horses are now being swapped for mobile phones. Or sold for as little as €20.

Correction: An earlier version of this story incorrectly reported that over 20,000 abandoned horses were roaming Ireland. The error has since been corrected.