Germany's European policy is about to undergo a transformation as significant as Ostpolitik --the country's improvement of relations with the Soviet bloc -- was in the early 1970s. While that policy was characterized by the slogan "change through rapprochement," Berlin's new approach might be dubbed "more justice through more Europe."

In both cases, it is a question of overcoming a divide, between the East and the West in the 1970s and between north and south today. Politicians tirelessly insist that Europe is a community of fate. It has been that way since the establishment of the European Union. The EU is an idea that grew out of the physical and moral devastation following World War II. Ostpolitik was an idea devoted to defusing the Cold War and perforating the Iron Curtain.

Unlike earlier nations and empires that celebrated their origins in myths and heroic victories, the EU is a transnational governmental institution that emerged from the agony of defeat and consternation over the Holocaust. But now that war and peace is no longer the overriding issue, what does the European community of fate signify as a new generational experience? It is the existential threat posed by the financial and euro crisis that is making Europeans realize that they do not live in Germany or France, but in Europe. For the first time, Europe's young people are experiencing their own "European fate." Better educated than ever and possessing high expectations, they are confronting a decline in the labor markets triggered by the threat of national bankruptcies and the economic crisis. Today one in five Europeans under 25 is unemployed.

A New Age of Risky Confusion

In those places where they have set up their tent cities and raised their voices, they are demanding social justice. In Spain and Portugal, as well as in Tunisia, Egypt and Israel ( unlike Great Britain), they are voicing their demands in a way as nonviolent as it is powerful. Europe and its youth are united in their rage over politicians who are willing to spend unimaginable sums of money to rescue banks, even as they gamble away the futures of their countries' youth. If the hopes of Europe's young people fall victim to the euro crisis, what can the future hold for a Europe whose population is getting older and older?

News programs offer new visual material for the dawning of a new age of risky confusion -- the "world risk society" -- on an almost daily basis. The headlines have been interchangeable for some time: Insecurity Over the Future of the Global Economy, EU Bailout Fund in Jeopardy, Merkel Attends Crisis Meeting with Sarkozy, Rating Agency Announces Downgrade of US Debt. Does the global financial crisis signal the deterioration of the old center? Ironically, it is authoritarian China that is playing the moral apostle on the financial front, with its sharp criticism of both democratic America and the EU.

There is one thing the financial crisis has undoubtedly achieved: Everyone (experts and politicians included) has been catapulted into a world that no one understands anymore. As far as the political reactions are concerned, there are two extreme scenarios that can be juxtaposed. The first is a Hegelian scenario, in which, given the threats that global risk capitalism engenders, the "ruse of reason" is afforded an historic opportunity. This is the cosmopolitan imperative: cooperate or fail, succeed together or fail individually.

At the same time, the inability to control financial risks (along with climate change and migration movements) presents a Carl Schmitt scenario, a strategic power game, which opens the door to ethnic and nationalist policy.

The community of fate is inescapable in both models, because, no matter what we do, global risk capitalism creates new existential divisions and bonds across national, ethnic, religious and political boundaries. How can Europe even prevail in this environment? Paradoxically, the success of the EU is also one of its biggest obstacles. People have come to take many of its achievements for granted, so much so that that perhaps they would only notice them if they ceased to exist. One only need imagine an EU in which passport controls are reintroduced at borders, there are no longer reliable food safety regulations everywhere, freedom of speech and of the press no longer exist under today's standards (which Hungary is already violating, thereby exposing itself to strict scrutiny), and Europeans traveling to Budapest, Copenhagen or Prague, or even Paris, Madrid and Rome, are forced to exchange money and keep track of exchange rates. The notion of Europe as our home has become second nature to us. Perhaps this explains why we are prepared to jeopardize its existence so carelessly.

We must recognize and acknowledge the reality that Germany has become a part of the European community of fate -- in exactly the way former German Chancellor Willy Brandt described during the first session of parliament following German reunification: "Let us hope that being German and being European are now one and the same, today and forever."

Does the Hegelian idea that reason ultimately prevails throughout history, despite many diversions, still apply? Or is Carl Schmitt's belief that hostility among nations must invariably prevail more fitting to conditions in the world today?

Unlike the community of fate between two rivals that exists between the United States and China, Europe's community of fate is based on shared laws, a shared currency and shared borders, but also on a "never again!" principle. Instead of invoking a noble past, the EU attempts to ensure that the past will never repeat itself. Instead of becoming a super-state or a mechanism that represents enlightened national interests in the best of cases, the EU has taken on a third form. Its most important role is to orchestrate. It facilitates the networking of commitments and entities that include sovereign states, as well as transnational organizations, municipal and regional governments and the organizations of civil society.

An Accumulation of Impositions

Within this framework, the bailout funds for southern European countries have engendered a logic of conflict between donor and debtor nations. The donor nations must implement domestic austerity programs and, for this reason, are exerting political pressure on the debtor nations at a level exceeding the pain threshold. In contrast, the debtor nations see themselves subject to an EU dictate that violates their national autonomy and dignity. Both stir up hatred of Europe, because everyone sees Europe as an accumulation of impositions.

And then there is the perceived external threat. Critics of Islam, which claim that Muslims are abusing the West's values of freedom, managed to connect xenophobia with enlightenment. Suddenly it was possible to be opposed to the encroachment of certain immigrants, all in the name of enlightenment. As a result, three destructive processes are overlapping and being reinforced in Europe: xenophobia, Islamophobia and anti-European sentiments.

Many envision the end of politics when they think about politics. How can anyone be so blind? In big and small ways, and at the national, European and especially the global level, Hegel, the believer in reason, and Schmitt, who sees enemies everywhere, are at odds.

When it comes to the eternal crisis called Europe, this conflict over the model of the future raises the following questions: To what extent does the revolution among outraged youth actually transcend national borders and promote solidarity? To what extent does the feeling of being left behind lead to a European generational experience and new European policy initiatives? How are workers, the unions and the center of European society behaving? Which of the major parties, in Germany, for example, has the courage to explain to citizens what Europe as a homeland is worth to them?

Merkel adheres to the Hegelian idea by preferring the detours of reason. To use the metaphor of dance: two steps backward, one step to the side, then a magical, lightning-quick about-face, softened by a tiny step forward -- in much the same way as the coalition government in Berlin is hopping, stumbling and tumbling its way forward, dancing to music that neither the Germans nor the other Europeans can hear or comprehend. While former Chancellor Helmut Kohl warned against a German Europe and sought a European Germany, Merkel advocates a German euro-nationalism, putting her faith in the ability of Berlin's regulatory and economic policy to heal Europe's wounds.

But in light of the financial crisis, European policy today should play the same role as the Ostpolitik of the 1970s did in divided Germany: a unification policy without borders. Why was the enormously expensive reunification with East Germany self-evident, and why, on the other hand, is the economic integration of debtor nations like Greece and Portugal frowned upon? It isn't just a question of paying the piper. In fact, the real challenge is to rethink and reshape Europe's future and its position in the world.

The introduction of euro bonds would not be a betrayal of German interests. The road to a union characterized by solidarity, much like the recognition of the Oder-Neisse border between a unified Germany and Poland, is indeed in Germany's well-considered interest. It is an expression of European and German realpolitik. Why shouldn't Europe introduce a financial transaction tax, which would establish a financial scope for a social and environmental Europe, which in turn would promise workers security through Europe, and in doing so address the greatest concerns of young Europeans?

The concept of more justice through more Europe contains an appeal in terms of a transnational community of solidarity. "Be outraged, Europeans." Just as many demonized Brandt's talk of rapprochement with the communist bloc as treason, today's call for "more Europe!" is a blow in the face of national self-awareness.

Merkel's back-and-forth and forward-and-backward approach could also create an opportunity for a future project involving the Social Democrats and the Green Party. As soon as the SPD and the Greens have explained that a social Europe is more than an introverted tightwad, but rather -- using Hegel's argument -- an historic necessity, even the SPD will regain stature and win elections. This, of course, is predicated upon its having the courage to declare Europe to be its main project, just as Ostpolitik was more than 40 years ago. 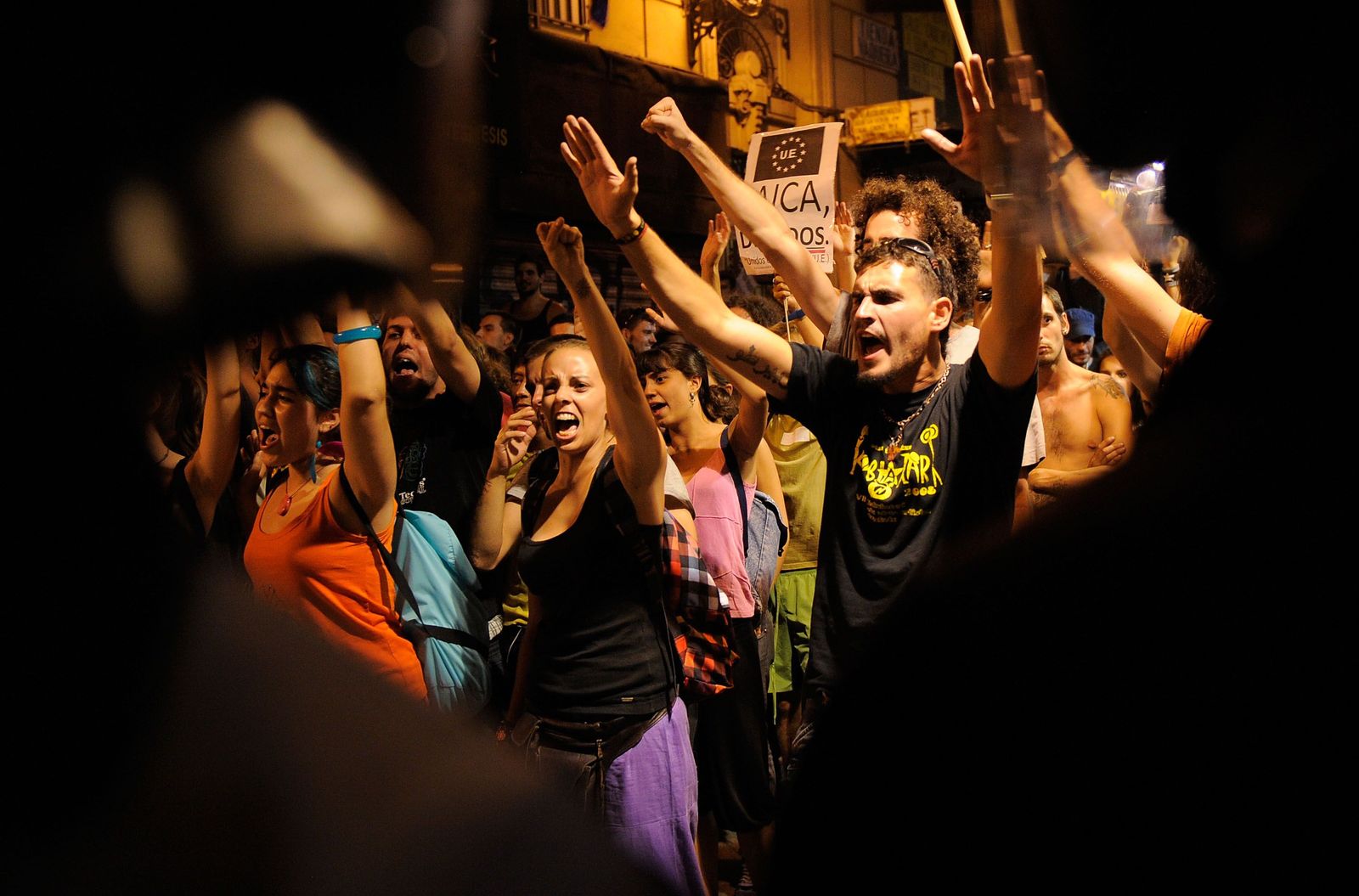 Young people in Spain at an August protest: One in five Europeans under the age of 25 are jobless.