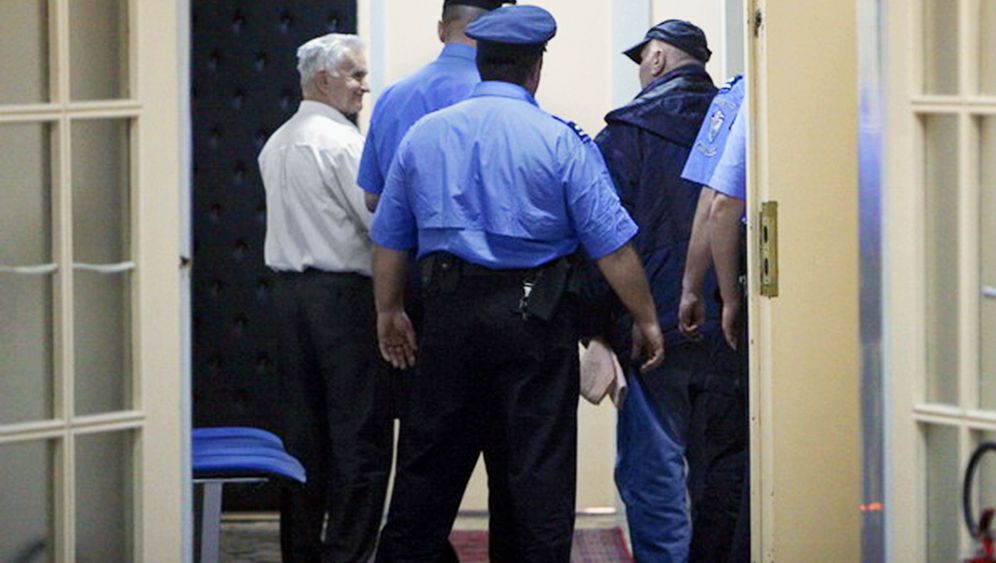 The man who was led away by police in Belgrade last Thursday was wearing a baseball cap and dragging his feet. He no longer resembled the man he was in Srebrenica.

The image of Ratko Mladic that has burned itself into our collective memory more than all others was taken on July 12, 1995. It depicts the then head of the Bosnian Serb army with the arms of his uniform rolled up and raising his glass for a toast. He was clearly in a celebratory mood. Standing at his side, also with his glass raised, is Lieutenant Colonel Thom Karremans, commandant of the Dutch United Nations peacekeepers in Srebrenica.

Karremans would later characterize the capture of Srebrenica under the command of General Mladic as a "correct attack," even though it was already known by then that almost 8,000 Muslim men and boys had been executed in those July days in the eastern Bosnian enclave. The killers were members of Bosnian Serb units, operating under the eyes of the Dutch UN protective forces and within sight of American U-2 spy planes.

Now at least General Mladic can be held accountable for the massacre in and around Srebrenica. Last Thursday, the 68-year-old veteran was arrested in the Bosnian village of Lazarevo, 100 kilometers (62 miles) north of the Serbian capital Belgrade. Mladic faces indictments before the war crimes tribunal in The Hague for genocide, crimes against humanity and war crimes during the Bosnian conflict, from 1992 to 1995.

Ironically, It Is the Dutch

The most-wanted presumed war criminal on the continent has been apprehended, a man who investigators believe was the military commander in charge of the most horrific massacre in Europe since the end of World War II. Ironically, it is the Dutch who, after showering their helpless UN peacekeepers with comfort and medals after their return from Srebrenica, will now play host to Mladic almost 16 years later. The former general is expected to be brought to a prison in the seaside resort town of Scheveningen outside The Hague this week, after a Belgrade court ordered the transfer last Friday. On Tuesday, a Serbian court denied a Mladic appeal aimed an blocking the transfer, clearing the way for him to be flown to the Netherlands.

Former Serbian President Slobodan Milosevic died in pretrial detention in Scheveningen in 2006, five years after his arrest. The Bosnian Serb leader Radovan Karadzic is still incarcerated there, and has been on trial since 2009. In a statement made through his attorneys, Karadzic said that he was sorry that his former military commander would soon join him in Scheveningen, and that he regrets "that General Mladic has lost his freedom."

Two decades after the eruption of the Yugoslav wars of succession, which brought devastation and hundreds of thousands of deaths to the Balkans, things finally seem to be looking up for the Serbs, once the most powerful ethnic group in the country of "fraternity and unity," the collapse of which they sought to prevent with brutal wars of aggression starting in 1991. To this day, Serbia is paying for its role in those wars with diplomatic marginalization, most notably by the European Union.

"This removes a heavy burden from Serbia and closes a page of our unfortunate history," said Serbian President Boris Tadic, shortly after Mladic was arrested. But with the somber expression on his face as he announced the good news, Tadic could just as easily have been speaking at a funeral.

Was Tadic thinking about what had happened to former Prime Minister Zoran Djindjic, who was murdered in March 2003, two weeks after announcing his intention to extradite Mladic? Or was the Serbian president anticipating the convulsions Mladic's arrest would trigger in the power structure? The president promised that the government would now look into where and with whose help the general, who many Serbs still celebrate as a hero, remained in hiding for one-and-a-half decades.

One of the targets of Tadic's ominous threat was Vojislav Kostunica, a former supporter of Milosevic and the current leader of the opposition Democratic Party of Serbia. At the end of her mandate, Carla Del Ponte, the former chief prosecutor on the Hague court, said: "Kostunica never wanted to arrest Mladic. At the most, he wanted to convince him to turn himself in." The fact that Aca Tomic, the former head of military intelligence, was arrested at the end of January complicates things even further. Tomic was a close associate of Kostunica and is suspected of having hidden Mladic for years.

Current President Boris Tadic can expect to face problems of his own. As the former defense minister, Tadic was once the commander-in-chief of the army, at a time when Mladic was at large and, with the friendly support of old comrades-in-arms, moved from one hiding place to the next, making fools of the rest of the world like some con artist. Even after becoming president, Tadic, labeled as "pro-Western," did not try to deny rumors that Mladic was dead or had escaped to Moscow.

Last year the Serbian government raised the reward for information leading to Mladic's capture to €10 million. That money will now remain in the government's coffers, because the fugitive was caught "within the context of the normal operational work of the Serbian security agencies," the Justice Ministry announced. According to a senior politician in Belgrade, Mladic had threatened early on to exact revenge on any confidant, including his most remote relatives, who might betray him.

Jogging Through the Streets

It is believed that no one provided the crucial information that led to Mladic's arrest. Perhaps this is true, because it was known that Mladic had lived undisturbed for years in his house in Belgrade's diplomatic district, and that the fugitive was seen at the bakery, jogging through city streets and watching football matches from the VIP box at Partizan Stadium. According to statements by his former bodyguard Brabislav Puhalo, the general moved about freely in Belgrade until 2001 and was even received at the Interior Ministry.

Mladic later moved temporarily to military convalescent homes, used various apartments in a newer section of Belgrade, and eventually bought a farmhouse near Valjevo, where he raised goats and set up 60 beehives. His hiding places were paid for by businesspeople as well as by secret army and intelligence service funds. In addition, Mladic's son Darko and two Serbian officers were able to openly withdraw the retired general's pension payments from the bank until 2005.

The fact that it remained relatively calm on the streets of Belgrade last week -- unlike in 2008 following the arrest of Radovan Karadzic -- may reflect the public's displeasure after 20 years of isolation. Nevertheless, European Union High Representative for Foreign Affairs Catherine Ashton uttered nothing but meager words of satisfaction after it had become clear that the pressure on Serbia had worked. Ashton was scheduled to arrive in Belgrade on the day of Mladic's arrest. And Serge Brammertz, the chief prosecutor in The Hague, had criticized Serbia's hunt for Mladic as "inadequate" in his May 17 report.

What the Arrest Means for Serbia

It still remains unclear how much was known about Mladic's game of hide-and-seek in the West, where much applause for aspiring EU member Serbia can now be heard from the battlements of Fortress Europe. It is especially unclear how much the Americans knew.

In her book "Peace and Punishment," Florence Hartmann, the spokeswoman for former Hague prosecutor Del Ponte, describes the consternation of investigators in 2006, when they discovered why their years of cooperation with the CIA had been so unsuccessful. The US agents operating in Serbia since 2002 had initially sent their information about Mladic's hiding places to CIA headquarters in Langley, Virginia. According to Hartmann, the reports were first processed in Langley, and then only those parts were forwarded to the tribunal that supported the claim that Mladic wasn't in Serbia at all.

Because Hartmann had used classified documents of the tribunal for her sensational revelations and had revealed confidential information, she was ordered to pay a fine of €7,000. However, Hartmann is not alone in her assertion that the Americans were playing a mysterious double game.

William Stuebner, the former deputy mission chief of the Organization for Security and Cooperation in Europe (OSCE) in Bosnia-Herzegovina, went on record as saying that for a full 18 months after charges were filed against Mladic, the general continued to live undisturbed in the sector of Bosnia controlled by the Americans. Stuebner also served as the intermediary between the Hague tribunal and the NATO-led forces in Bosnia.

Unfit to Be Questioned

According to Stuebner, when the peacekeepers finally decided to search Mladic's underground command headquarters in Han Pjesak in 2004, it was not only announced in advance, but also promised that certain parts of the complex would not be searched at all.

At the time, Mladic was still vigorous, if choleric. Sitting in his tiny office between a small couch and a desk, he liked to joke that he too, like Palestinian leader Yasser Arafat, was ready for the Nobel Peace Prize. Indeed, for many it is hard to believe that today, following two strokes, Mladic is infirm and allegedly not fit to be questioned. Recently, he was even hardly able to remember his own alias, Milorad Komadic.

Mladic was seen as a model of will power. Born in 1943 in Bozinovic, 50 kilometers south of Sarajevo -- the city he would later order bombarded for 42 months -- he made a career for himself in the Yugoslav People's Army. A devoted communist and the son of a partisan killed in World War II, Mladic excelled in sports and weaponry. By the time then Serbian President Milosevic tapped him to carry out his war policy, Mladic could already looked back on a rapid climb up the career ladder.

He became head of the general staff of the Bosnian Serb army on May 12, 1992. Under Mladic's leadership, the Bosnian Serbs bombed their way from one victory to the next, sometimes controlling as much as 70 percent of Bosnian territory. The Hague War Crimes Tribunal has hundreds of documents and pieces of testimony proving that Mladic not only received his pay, but also his orders from Belgrade.

Belgrade Could Face Billions in Claims

This is not without significance for the upcoming Mladic trial in The Hague. One of the issues in the current trial of Momcilo Perisic, the general chief of staff of the Yugoslav army during the capture of Srebrenica, is whether Perisic and Mladic planned and executed the taking of Srebrenica together. If the court can prove that Belgrade, contrary to all of its previous claims, intervened militarily in the Bosnian war, Serbia could face billions in claims from family members of those killed or from disabled veterans.

Thus, even though the presumed mass murderers Karadzic and Mladic have now been caught -- the former after spending years masquerading as a quack doctor and the latter while raising honeybees -- the final chapter of the Balkan tragedy has not yet been written.

While Mladic awaits his transfer to The Hague, the successor to the party of his former patron Milosevic is applying for acceptance into the Socialist International -- with the support of Germany's Social Democrats. In Bosnia-Herzegovina, still under international administration almost 20 years after a war erupted there, Serbian leaders are threatening with secession. And northern Kosovo, with its majority Serb population, is orienting itself ever closer to Belgrade.

The borders between peoples and states have always been drawn with blood, at least according to Mladic, who spouted such sentences during a meeting in his Bosnian hideout after the war. Now that the general has been apprehended, it will be up to others to decide on the future of the Serbs. 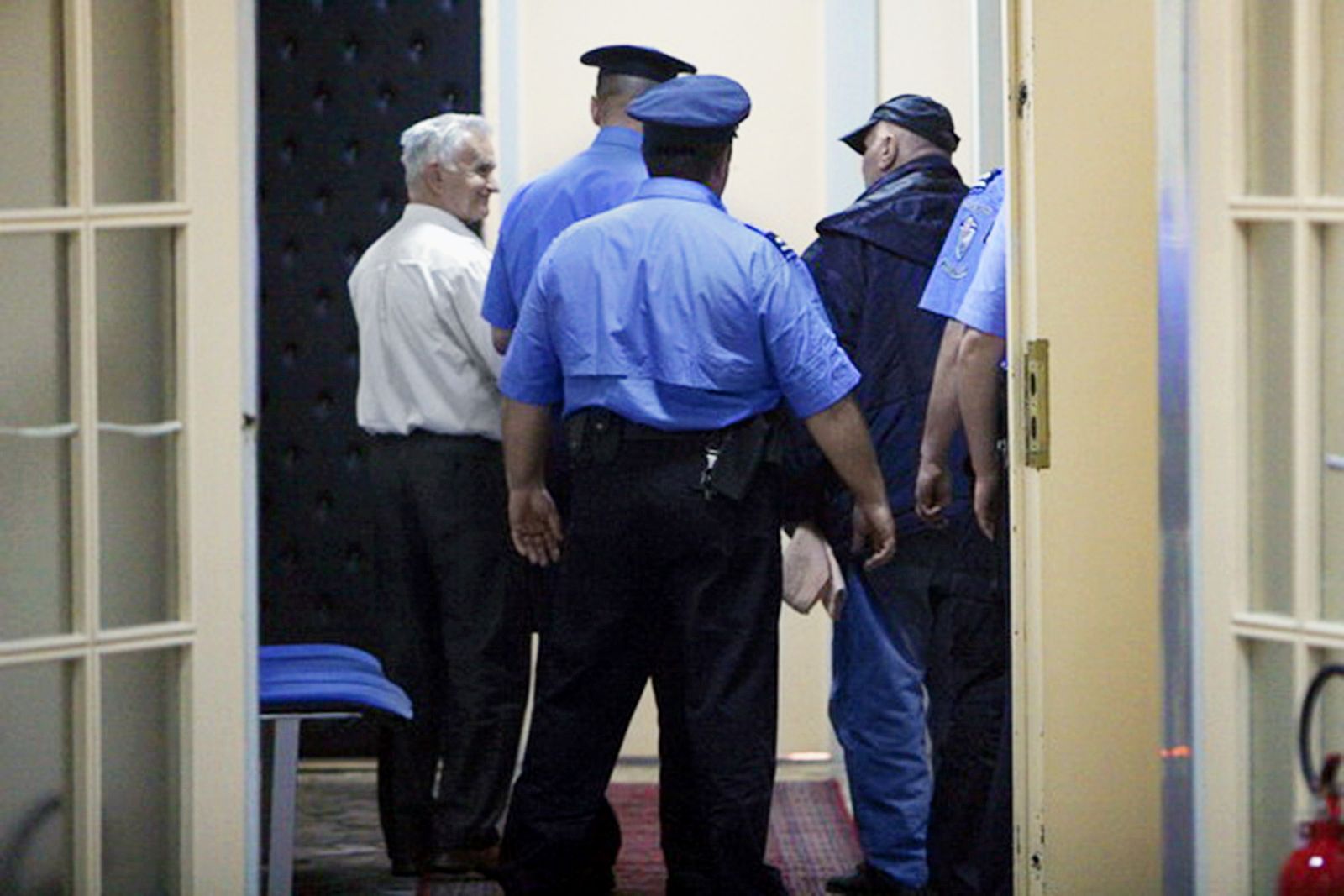 Former Bosnian Serb military chief Ratko Mladic was arrested in Serbia last week following 16 years on the lam. He stands accused of war crimes during the Bosnian war in the 1990s and is thought to have orchestrated the massacre of thousands of Muslim men and boys in Srebrenica. 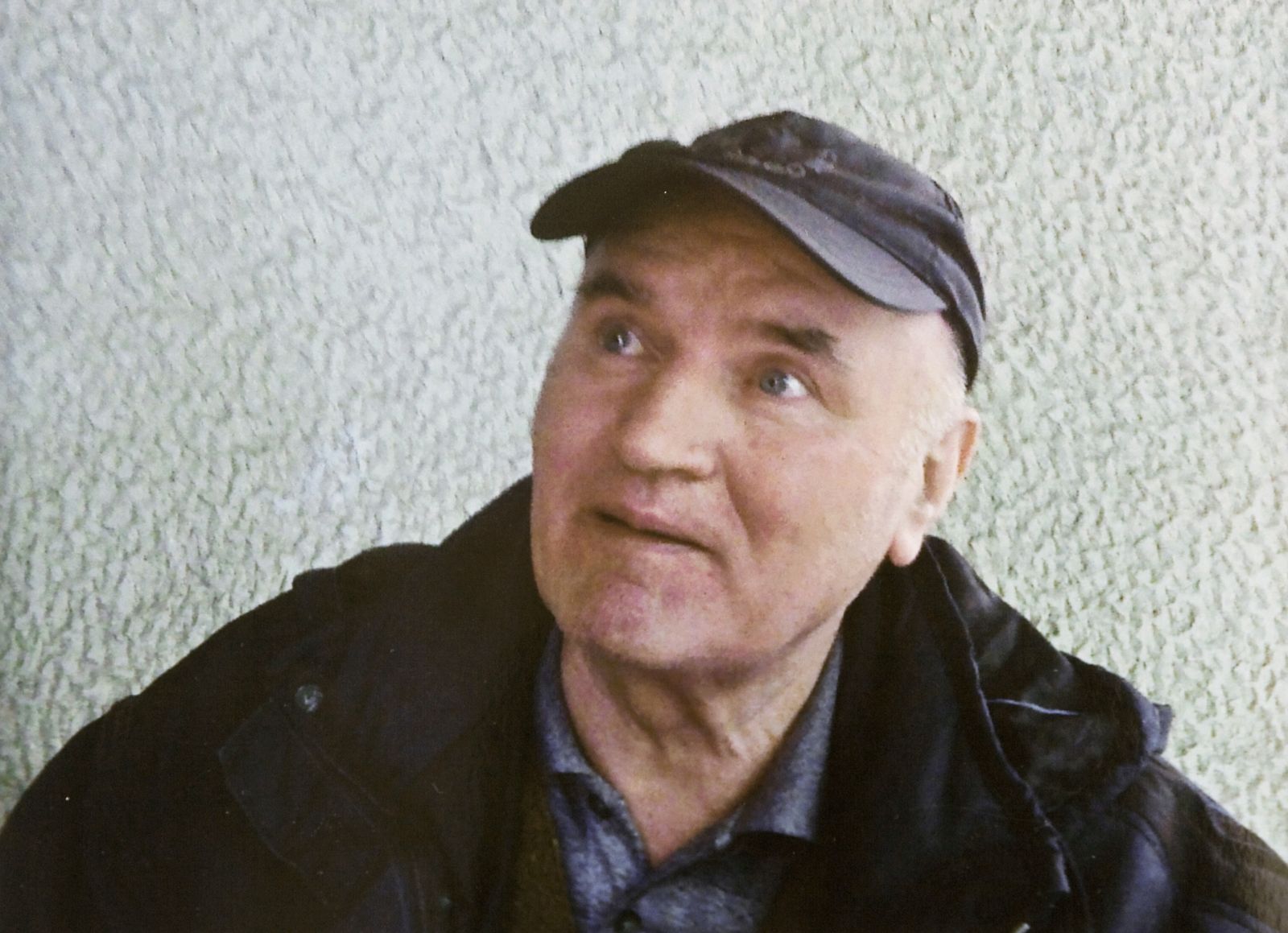 Mladic is likely to be sent to The Hague war crimes tribunal this week to face charges of genocide and crimes against humanity.