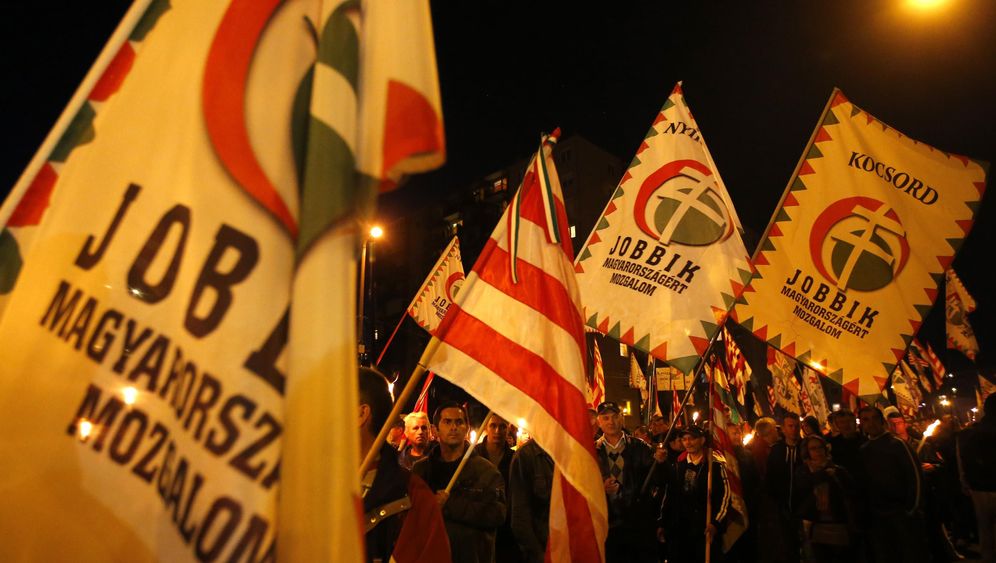 Opposing protests by both the far-right and members of the Roma minority on Wednesday in Hungary highlighted growing tensions in the country, which continues to struggle through a recession and long-term economic crisis.

Bearing banners and burning torches, more than 1,000 supporters of the far-right opposition Jobbik party rallied at housing projects in the northeastern city of Miskolc where many Roma live. The radical nationalist party blames the Roma community for a number of Hungary's social problems, including crime and a lack of public security.

Although the nationalist party had called for the protest, uniformed members of the banned paramilitary group Magyar Gárda, or the Hungarian Guard Movement, were also present among the protesters, who reportedly shouted anti-Roma slurs.

"Those who don't work shouldn't bring children into this world," Jobbik parliamentarian Zsolt Egyed told the crowd. "We must act now to save our future and free Hungary from the gypsy crime."

Amid fears of clashes after a Roma protest in a different part of the city earlier in the day, several thousand Hungarian police in riot gear secured the city and the protest at the Avas projects, home to some 40,000 residents. A number of Roma from poor villages surrounding the former communist industrial city moved to the housing area as part of a controversial welfare program some years ago, but many have been unable to find work.

At the Roma demonstration earlier in the day, several hundred members of the minority group rejected the characterization that they are to blame for Hungary's problems and called for an end to discrimination. "We want peace, justice and a Hungary without Nazis," one banner read.

Nearly one-tenth of Hungary's population of 10 million are Roma. Amid a difficult recession in the country, Jobbik has targeted the Roma community as a scapegoat. The conservative government in Budapest has called for tough austerity measures to slash its budget deficit, but Jobbik, which holds 45 of 386 seats in parliament, has said these cuts have made it impossible to ensure public safety in parts of the country.

In response, Roma leaders told news agency Reuters that law enforcement isn't the real issue. Instead, they appealed for greater integration of Roma within a Hungarian society that is often intolerantof the minority population.

"I won't lie to you, there is an integration problem, but what we need is a lot of social workers, not police," said Gabor Varadi, chief of the local Roma Minority Government.