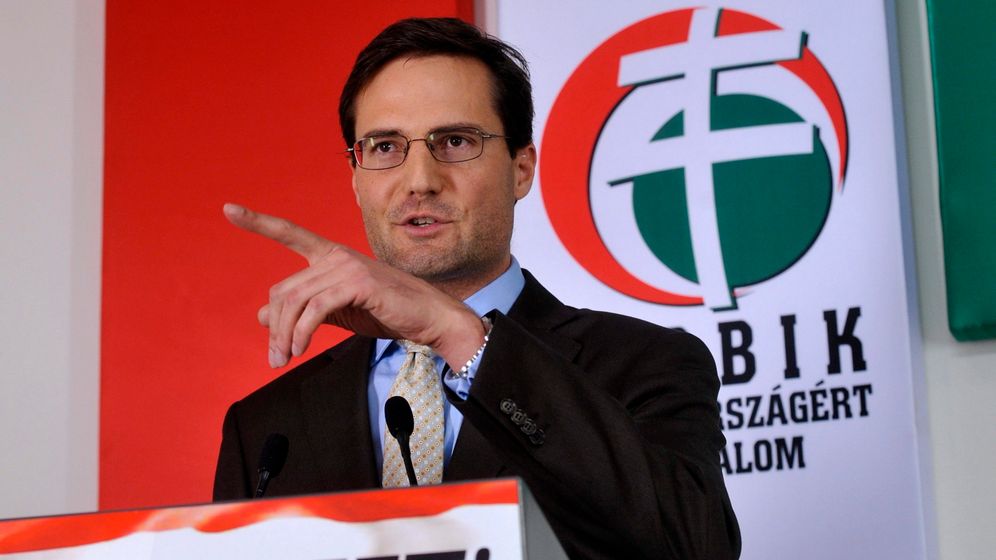 Conversations with the right-wing extremist Hungarian politician Márton Gyöngyösi regularly devolve into tiring marathons of relativization. He's not an anti-Semite, he insists, but the Jews … ; he's not against the Roma, but the Gypsies … ; he's not an extremist in favor of dictatorships, but liberal democracy … has failed.

The 33-year-old economist and former tax advisor is not just some random right-winger, though. He is the deputy parliamentary floor leader for the Jobbik party, which won 17 percent of the vote in Hungary's 2010 elections. Gyöngyösi's parents work for Hungarian trade associations abroad and as he was growing up, he spent time in Egypt, Afghanistan, India and Iraq. Jobbik made him the party's foreign policy spokesman.

Gyöngyösi often chuckles in satisfaction at his evasive answers. He sees himself as something of a clever head diplomat for his party.

But on Monday evening, Gyöngyösi for once chose clarity in comments to the Hungarian parliament. During a debate over Israel's military offensive against Hamas in the Gaza Strip, Gyöngyösi demanded that "all Jews living in Hungary be registered" and that "Jews, particularly those in parliament and the government, be evaluated for the potential danger they pose to Hungary." In a comment directed at Zsolt Németh, a state secretary in the Foreign Ministry, he said: "I think you owe Hungary such a compilation."

Németh, the long-serving foreign policy expert from the conservative governing party Fidesz, neither condemned nor showed any indication of dismay at the comments. "The number of Jews in Hungarian government," he said, "really has nothing to do with the serious conflict in the Middle East."

"That was pure national socialism in parliament," commented Budapest historian Krisztián Ungváry. Indeed, it was the first time Jobbik openly identified itself with the racist dogma of the Nazis. Other right-wing parties in Europe have likewise held their racial hatred cards close to their chests.

Gyöngyösi's comments triggered indignation and disgust from representatives of Jewish organizations, politicians and civil rights activists on Tuesday. Several hundred people wearing Jewish stars gathered on Tuesday afternoon to protest "creeping Fascism" in Hungary's parliament. Slomó Köves, head of the Unified Hungarian Jewish Congregation, pledged to take legal action against Gyöngyösi. It would not be the first time the Jobbik politician found himself on the wrong end of a lawsuit. Last spring, Attila Mesterházy, head of the Socialist Party, filed suit against Gyöngyösi because he denied the Holocaust during an interview.

Officially, Jobbik politicians have thus far vehemently refuted any ideological proximity to neo-Nazism. But the denials have been half-hearted. On its Internet television channel N1, for example, the party once praised Adolf Hitler as one of the "greatest statesmen in the 20th century." In the spring, a Jobbik representative marked in parliament the anniversary of the alleged Jewish ritual murder of a 14-year-old Christian girl in the village of Tiszaeszlár, involving accusations against Jews in the settlement of murder, which set off weeks of pogroms in 1882-1883. In the summer, the viciously extremist and anti-Semitic European Parliamentarian Csanád Szegedi was expelled from Jobbik when it was discovered that he had Jewish ancestors.

Kristián Ungváry is not surprised by Gyöngyösi's comments. He has long been arguing that Jobbik is a neo-national socialist party in the tradition of the Arrow Cross (the national socialist, World War II-era Hungarian party) and says that the primary problem is the silence their extremism is met with by the governing coalition. "The hair-raising scandal is the limitless cowardice displayed in not reacting to such comments," Ungváry says. "There are always Nazis everywhere, particularly in Eastern Europe, and we have to live with that fact. But you have to distance yourself from them and reprimand them. And that didn't happen."

Only after Jewish groups protested did the government release a statement on Tuesday in which the governing parties sharply condemned Gyöngyösi's statements in parliament and pledged decisiveness in the fight against extremism, racism and anti-Semitism. Still, the document read like an obligatory mea culpa made necessary by State Secretary Németh's silence. Bloggers at the most widely read Hungarian Internet portal index.hu pointed out that the decisive paragraph in the statement had already been used several times almost word for word in response to similar incidents.

In reality, Fidesz has moved ever closer to the positions of the right-wing extremist Jobbik party, partly to lure voters from the right and partly out of conviction. In September, Prime Minister Victor Orbán held a blood-and-soil speech on Hungarian values that bordered on right-wing extremism in the southern Hungarian village of Ópusztaszer on the occasion of a memorial dedication. In May, Hungarian Parliamentary President László Kövér took part in a memorial for the writer József Nyírö, who was a leading cultural ideologist for the Arrow Cross. In Hungary's current national curriculum for its schools, the works of several anti-Semitic authors are listed as recommended reading.

The Jobbik party too has released a kind of correction to the comments by Gyöngyösi, in which the word "Jew" is replaced by "Israeli." He only meant Jews with dual citizenship -- those who hold both Hungarian and Israeli passports -- Gyöngyösi says in the party statement. He asked for forgiveness from his Jewish fellow citizens for the misunderstanding.

Fidesz parliamentary floor leader Antal Rogán has also initiated the introduction of fines and other penalties for future comments similar to those delivered by Gyöngyösi.

The Jobbik party appears unmoved. It is now demanding that Hungarian politicians be checked to determine if they also possess Israeli citizenship. In addition, they want a list of places in Hungary where "Israeli capital" is invested and the size of those investments.

Finally, Jobbik is demanding that a certain pact with Germany and Poland be made public. Party head Gábor Vona is convinced of the existence of the secret treaty. In it, he says, the three countries have committed themselves to providing a home "for 500,000 Jews in an emergency."