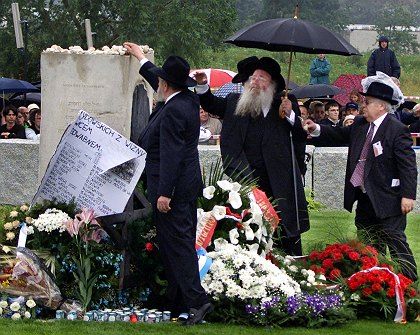 A group of rabbis places stones on top of the memorial monument in Jedwabne. Gross's 2001 book on the subject opened up the debate on Polish anti-Semitism.

A new book probing the murder of Jews in Poland after the end of World War II has not only unleashed a storm of controversy, it may land its author in jail. The Krakow Prosecutors Office is considering bringing charges against the Polish-American historian Jan Tomasz Gross for his book "Fear: Anti-Semitism in Poland after Auschwitz." The charge? Slandering the Polish nation.

The book has stirred a huge debate in the country since the Polish language version went on sale last Friday. While some academics, clerics and politicians have slammed the book for what they see as generalizations about the attacks that were carried out on Jews in post-war Poland, others have defended it for its contribution to the debate about Poland's past.

Gross' book focuses on the 1946 Kielce pogrom in which 40 Jews were killed. He claims that such cases demonstrate a widespread wish in Polish society to rid the country of Jews. He argues that this was motivated by anti-Semitism and by people wishing to avoid disputes with returning Jewish neighbors over property.

According to the Polish Institute of National Remembrance, which investigates both Nazi and Communist crimes, between 600 and 3,000 of the approximately 300,000 Jews who survived the Holocaust were subsequently killed in Poland. Gross, a professor at Princeton University, says around 200,000 Jews decided to leave the country after anti-Semitic attacks.

The author is now under investigation by the public prosecutors in Krakow, home to his publishers Znak. They are looking into whether the book broke a law that makes slandering the Polish nation a crime. Statute 132 was passed by the government of former Prime Minister Jaroslaw Kaczynski in 2006 and provides a three-year prison term for anyone "publicly accusing the Polish nation of participating in, organizing or being responsible for Nazi or Communist crimes."

Gross says he is shocked at the investigation. "I find it so inappropriate to put books on trial or burn them," he told SPIEGEL ONLINE. "They should be discussed in a completely different forum."

The prosecutors have 30 days to make a decision but they are expected to make an announcement sooner than that. Gross is pretty confident things won't go as far as a prosecution. After all, the law itself is soon to be reviewed by the country's constitutional court after human rights activists complained about it.

Even if Gross does not end up in court, the book has unleashed a storm of controversy in Poland, with many right-wing commentators lashing out at its conclusions. Gross suspects that such criticism comes mostly from those who haven't yet read the book. "I think the discussion will slowly develop in a more substantive direction once people read it," he said hopefully.

The uproar isn't doing sales any harm. According to the publishers, 20,000 copies have already been sold since the book was published on Jan. 11, with the books flying off the shelves so fast that they had to rush to get another batch printed.

One of Gross' fiercest critics is Marek Jan Chodakiewicz, an historian based at the Institute of World Politics in Washington. In his book "After the Holocaust: Polish-Jewish Conflict in the Wake of World War II," Chodakiewicz sees the murder of Jews within the context of the Soviet-imposed communist dictatorship. He wrote an editorial in the daily Rzeczpospolita, published last Friday, which accused Gross of picking out the facts to back up his theory. But Gross dismisses Chodakiewicz as "not much of an historian" and a "right-wing apologist." 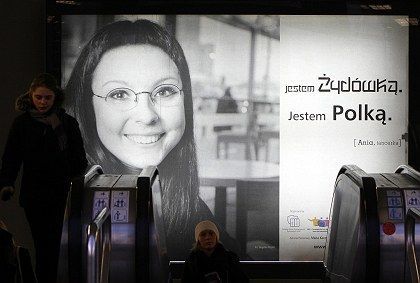 The book has likewise ruffled feathers in Poland's conservative establishment. The Archbishop of Krakow, Stanislaw Dziwisz, who has been described as the late Pope John Paul II's right-hand man, wrote a letter to the chairman of the Polish publishers to complain about the book. He said that they should propagate historical truth and not "awake anti-Polish and anti-Semitic demons." The archbishop said that the book had not taken into account the political realities in Poland of the time and he has also said that he does not want to meet with Gross who is currently in Poland promoting the book.

Meanwhile, the ultra-conservative League of Polish Families, which had been a junior coalition partner in the last Polish government, could not resist putting in its two cents' worth and called for Gross to be made a "persona non-grata" in the country.

The publishers have dismissed these complaints. "We should talk about these difficult issues," Znak spokesman Tomasz Miedzik told SPIEGEL ONLINE. "We have the freedom to ask difficult questions about our history and we should do that."

Gross, who was born in Warsaw in 1947, emigrated to the United States with his family in 1968. His previous book "Neighbors" likewise sparked controversy when it was published in Poland in 2001. It dealt with the massacre of Jews by Polish inhabitants of the town of Jedwabne in 1941. Gross concluded that the Jews in the town had perished at the hands of their own Polish neighbors rather than the Nazis, as had been previously assumed.

Many journalists and academics have rushed to defend Gross' book, even if some have disagreed with its central thesis, because they welcome the debate it has ignited about Poland's past. "The book has attacked the Polish myths, and for this reason it should be read and discussed," Miedzink says.

Marcin Zaremba, a historian at Warsaw University, said that he agreed with the argument that Poles had their share in the Holocaust. "Anti-Semitism was a kind of cultural code which Poles used at the time," he told Polish Radio.

Polish rabbi Burt Schuman said that he welcomed the debate, although he felt it was unfair to depict the country as anti-Semitic. He told Bloomberg that what was happening now was "harming our goal of reconciliation."

Writing in the left-liberal daily Gazeta Wyborcza on Monday, the influential Polish columnist Marek Beylin called for a "sincere debate about the dark secrets of the Polish past." While he criticizes Gross' book for not stressing the differences between the Nazi anti-Semitism of the Holocaust and Polish anti-Semitism, he praises the "challenge that Gross mounts to our efforts to come to terms with our past."

Beylin argues that the book's "blistering arguments and confrontational language" have done more to ignite a debate than all the well-measured historical tomes have managed to do in the past.

And he questions whether the criticism of the book isn't a sign of increased Polish nationalism. "Has the (former Kaczynski government's) propaganda that there are enemies trying to destroy Poland and the Polish identity made the public indifferent to Poles' past trespasses?" he asks.