In the summer of 2008, anxieties were spreading fast. In a dispatch dated Aug. 15, the US Embassy in Riga reported back to Washington that the war between Georgia and Russia was dominating discussions in Latvia. According to the dispatch, Latvian politicians were talking about how Russian tanks had rolled into a small country again, and how -- even though it was so far away -- they were thinking "this could easily be them." It went on to say that: "Latvians are beginning to worry if membership in (NATO and the EU) provides them the assurances of their security that they had hoped for."

Estonia, Latvia and Lithuania lie on the eastern edge of NATO. Although the western members of the alliance can also sympathize with the Baltic states' worries, nobody wants to have hardened fronts between East and West any more. "We are not returning back to the cold war," wrote the US ambassador to NATO, in a report classified secret, after meeting with the ambassadors of the three Baltic states in Brussels on Sept. 24, 2008. No one wanted to pick a fight with Russia. Nevertheless, Estonia, Latvia and Lithuania called for a contingency plan to be put in place, a military strategy for the event that war broke out in their region. The negotiations would prove to be a risky balancing act.

In several October 2008 papers that do not officially exist (so-called "non-papers"), Lithuania's Defense Ministry and Foreign Ministry spelled out in very concrete terms what they hoped to get: American combat troops on their soil, beefed-up anti-aircraft and anti-tank capabilities, better coastal defenses and annual exercises with the US military on the Baltic states' territory, preferably beginning in 2009. In essence, Lithuania wanted NATO to enlarge its "footprint" there as well as to develop a contingency plan. On Oct. 17, the US Mission to NATO cabled the Lithuanians' wish list to Washington.

In a meeting with US Secretary of State Condoleezza Rice on Oct. 9, 2008, Latvian Foreign Minister Maris Riekstins stressed how the war in Georgia had made very clear just how prepared Russia was to attack its neighbors. Rice tried to calm him down, but Riekstins could not be easily placated. He said there was no "hysteria" in regard to Russia, but pointed out that the Russian military had been conducting exercises just 100 kilometers (60 miles) from Baltic territory.

Turning Up the Pressure

Still, the Americans remained noncommittal. They first wanted to establish a consensus within NATO itself, but there was some resistance within the alliance, particularly from Germany. The US Embassy in Berlin wrote: "Germany continues to regard proposed NATO contingency planning to defend the Balts against possible Russian aggression as counterproductive and unnecessary." Indeed, the Germans didn't want to do anything that might jeopardize chances of integrating Russia more closely into NATO.

US President Barack Obama also had his own reservations. Since Obama took office, improving relations with Moscow had become a higher priority for US foreign policy.

But the pressure from the Baltic states just grew stronger. When NATO Secretary General Anders Fogh Rasmussen visited Estonia in early October 2009, the conversation kept returning to the matter of emergency planning, which, according to one American dispatch, was the most important issue for Estonia. Rasmussen assured his hosts that he would bring the issue up for further discussion within NATO, but an agreement was made to keep quiet about the issue to the outside world.

The Americans noted that it wouldn't be possible to put off a decision for much longer. In a comprehensive memo dated Oct. 20, 2009, US Ambassador to NATO Ivo Daalder asks Washington to come up with a set stance on the issue of emergency planning. He pointed out that both Obama and Secretary of State Hillary Clinton had already voiced their support for doing so.

Still, there continued to be a certain problem, which Daalder described in these terms: "The Baltic states clearly believe that the Russian Federation represents a future security risk and desire a contingency plan to address that risk. And therein lies the problem. While the exact content of MC 161 (editor's note: NATO's assessment of future threats) cannot be discussed in this message, post-Cold War NATO has consistently said that it no longer views Russia as a threat. … As we saw during the debates over the Russia-Georgia war, many Allies will take great pains to avoid even the suggestion that the Alliance and Russia are on course toward a new Cold War. Countries such as Germany … argue that the Alliance needs to find a way to work cooperatively with Moscow."

Under the Eagle's Wings

But the Germans also pointed out a possible way out of the dilemma. Daalder referred to a German suggestion that took advantage of the fact that the contingency plan for Poland was due to be revised. It was possible that the defense of the Baltic states could be included as part of the defense of Poland, Daalder wrote. The idea had originally been suggested to him by Germany's ambassador to NATO in a conversation, he added.

The US ambassador also made clear that the security needs of the three Baltic states was no minor issue. As he saw it, the Baltic states would only endorse more Russian-friendly NATO policies if the alliance partners first guaranteed that they would swiftly provide protection from Moscow in the event of an attack.

In a second cable, Daalder asked Washington to speed up its decision-making process so that it could reach a final decision by Monday, Dec. 7, 2009. Doing so would give the United States and Germany's ambassador to NATO time to promote the solution ahead of a meeting of NATO leaders, he wrote. It almost sounded like an ultimatum.

In the end, Daalder's pressure paid off, and Washington decided to back the German proposal. Now the Americans were willing to expand the contingency plan for Poland -- codenamed "Eagle Guardian" after the bird on Poland's national coat of arms -- to include the Baltic states.

As Daadler's deputy reported back to Washington on Dec. 16, the decision was welcomed at NATO headquarters in Brussels. Daalder had also reportedly pointed out that the issue should only be discussed within NATO and that it should under no circumstances be allowed to become a matter of public debate.

Not everyone was enthusiastic about the decision, however. The Poles expressed their reservations. Poland's deputy defense minister told a senior American diplomat in Warsaw that his government would prefer a plan that only involved Poland. The piggyback solution for the Baltic states shouldn't be allowed to delay completion of "Eagle Guardian," he said.

On Jan. 22, 2010, NATO's Military Committee, its highest military authority, approved the new contingency plan. Nobody was supposed to find out, however.

In a memo classified "secret" written on Jan. 26 and forwarded to all American liaison offices in NATO member countries, the State Department called for the matter to be kept in strict secrecy. "The United States believes strongly that such planning should not be discussed publicly. These military plans are classified at the NATO SECRET level," the memo read. "The Alliance has many public diplomacy tools at its disposal. Contingency planning is not one of them," continued the cable, which was signed by Clinton. A public discussion would provide insight into NATO's planning processes, the memo argued, and would only serve to increase tensions between Russia and NATO.

The memo also gave the diplomats additional important instructions, including one on what kind of language to use. If there were media inquiries about the issue, American diplomats should tell journalists that: "NATO planning is an internal process designed to make the Alliance as prepared as possible for future contingencies. It is not 'aimed' at any other country." 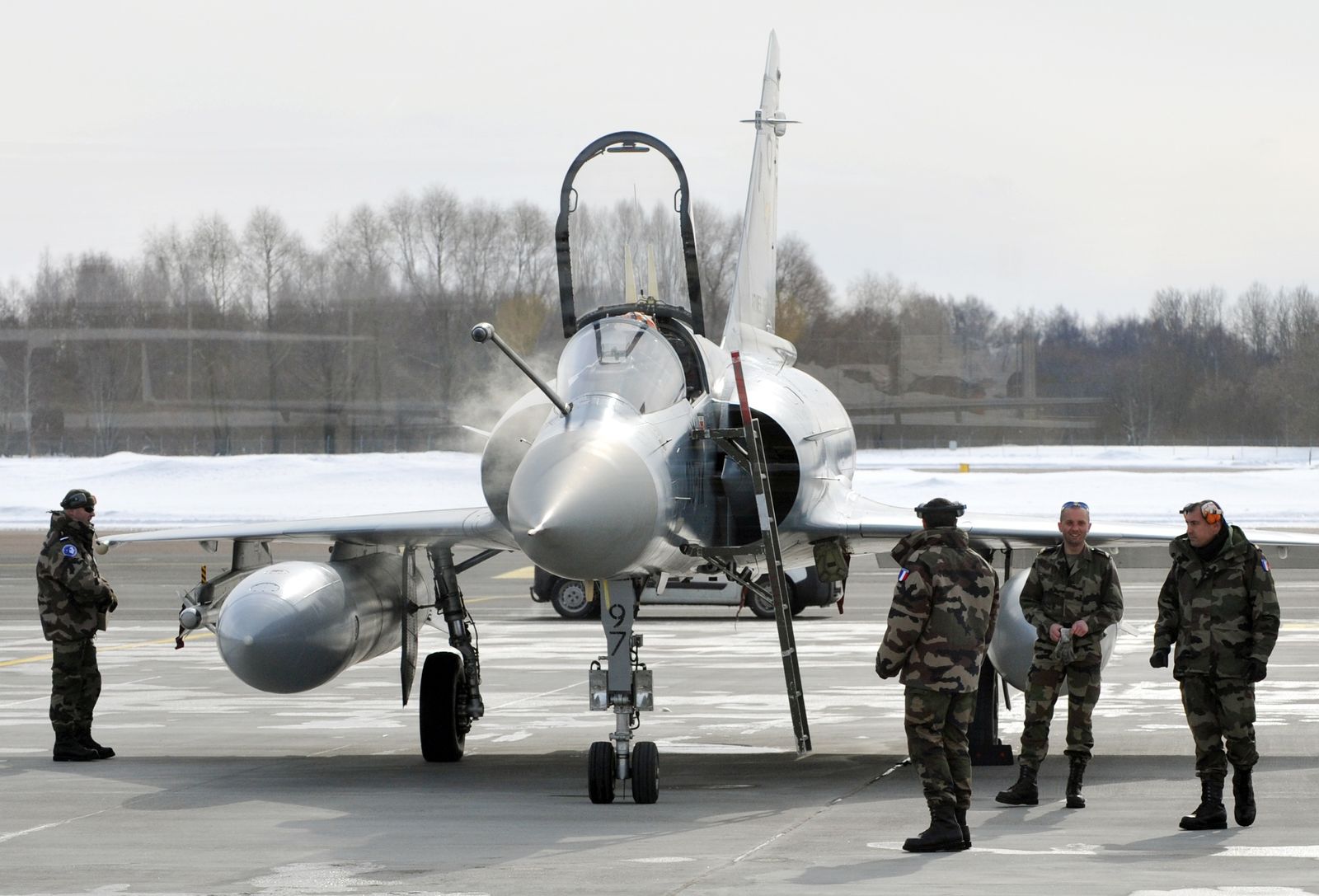