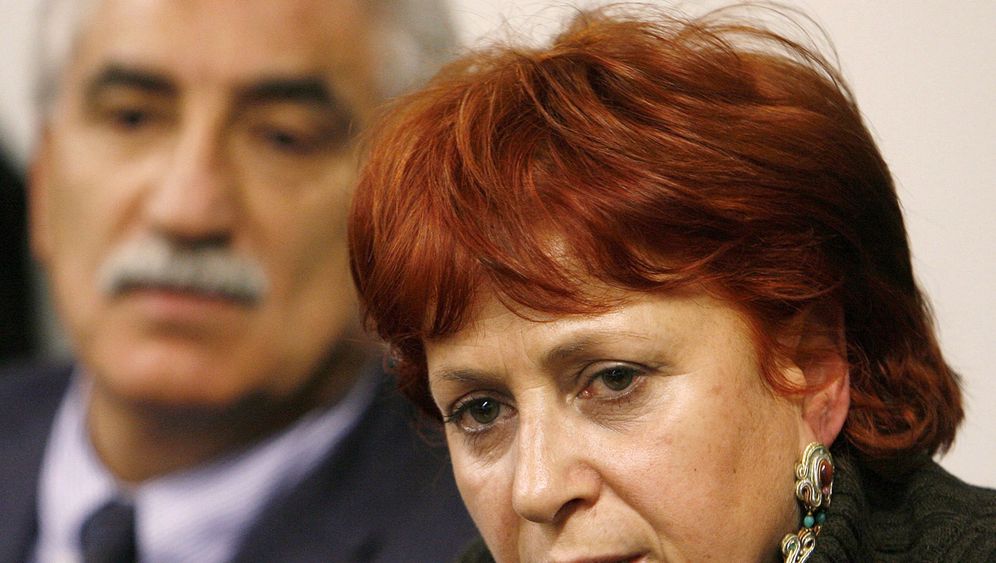 He's had to tolerate her at his trials for years. Many prosecutors have taken on former Italian Prime Minister Silvio Berlusconi in court, but none of them have been as persistent or tough as Milan state prosecutor Ilda Boccassini, a 63-year-old mother of two who refuses to give interviews.

When the media mogul laments the "red robes," "communist justice" and the "Soviets" who are out to destroy him, Boccassini is surely leading the pack in his mind.

The TV stations he owns, along with his newspaper Il Giornale, have devoted themselves to investigative pieces on Boccassini, secretly filming her at the supermarket or revealing her "extravagant" clothing purchases, such as a silk scarf for €300 ($392), or stockings for €21.

They even unearthed a "scandal" from way back in 1982, when the young lawyer was allegedly discovered "exchanging affections" with a youthful journalist in front of the Milan Palace of Justice. Because the journalist wrote for Lotta Continua, a far-left newspaper whose name translates loosely to "the fight goes on," there was an official investigation into the incident. The conclusion was that the incident had nothing to do with Boccassini's job. Still, years later, the account of the woman known as Ilda La Rossa, or "Ilda the Red," was ample fodder to titillate Berlusconi-supporting readers of Il Giornale.

The Naples native, who has had the nickname since her youth because of her red hair, remains unfazed by the campaigns against her. Boccassini knows "no fear," her friends say. She simply ignores much of the abuse, but she has been known to sue in cases of concrete slander.

The latest example was that of her purported mission to "turn the country upside down" and pursue Berlusconi for "political and ideological reasons," accusations for which Il Giornale was found guilty of defamation and ordered to pay Boccassini €100,000 in damages.

Boccassini's idol was Mafia hunter Giovanni Falcone. After the magistrate was killed by a Mafia bomb in 1992, she asked to be transferred to Sicily so she help could track the killers down. She was there when "boss of the bosses" Toto Riina was convicted. Then came the big Mafia trials, followed by the Mani Pulite, or "clean hands" legal campaign back in Milan, which took on Italy's corrupt political elite.

It was in this way that she eventually stumbled onto a defendant named Berlusconi, who she would come to encounter many times thereafter. Now, she and a colleague are slated to present the prosecutors' case against Berlusconi and plea for a jail sentence for the former Italian leader on charges of abuse of office and soliciting sex from an underage prostitute. According to the prosecutors, the billionaire regularly held "evening events for the purposes of prostitution." Dinner would be served with "erotic bunga-bunga dances," and for dessert there was sex between male guests (including Berlusconi) and young women who were either paid or provided with lavish gifts. Berlusconi maintains that the case is nonsense, and he has denied ever having slept with Karima el-Marough, who went by the stagename "Ruby the Heartbreaker," and is at the center of the case.

The first verdict in the case is expected within the month, which is poor timing for Berlusconi, given the possibility that Italy's next election campaign could be underway again soon after last month's election left the country in a political deadlock. But the 76-year-old's political advisors have revealed that he is gaining in polls, which is apparently buoying Berlusconi's hopes politically. Reports are even circulating that Berlusconi would like to see Italians vote again in June. Of course, a conviction on charges surrouding sex with a minor wouldn't exactly help his campaign.

Berlusconi is also expecting to face legal proceedings in other cases. He will likely appeal a March 7 jail sentence issued against him for illegally publishing a wiretapped conversation, an offense most Italians are unlikely to take very seriously. But a corruption investigation underway in Naples could prove more problematic. A former senator there alleges that Berlusconi bribed him with €3 million ($3.9 million) in 2006 to become a member of his People of Freedom (PdL) party, a move that caused the center-left coalition of then-Prime Minister Romano Prodi to collapse.

Worse yet for Berlusconi could be an appeals decision in a trial relating to television rights for his media company Mediaset. In that case, the former prime minister was sentenced to four years in jail in the first instance. A second ruling, which is expected to confirm the first verdict, is likely to be handed down this month. If a third and final appeal in the case were to be rejected before the statute of limitations is up in 2014, it would be catastrophic for Berlusconi's political career. He would be banned from political office for five years.

Prosecutors believe Berlusconi is currently using every procedural trick and ruse he can find to delay the problematic Ruby and Mediaset trials. That isn't surprising given what is at stake. First, he demanded that his court dates be postponed because he was too busy with his political pursuits. When that didn't work, he fell ill. His personal physician told the court last week that an eye infection had rendered him unfit for trial, and he would need a week to recover.

Along with the prosecutors in the Mediaset trial, Ilda Boccassini immediately requested that a court-appointed doctor be allowed to examine Berlusconi. He declared the politician was healthy enough to stand trial, a diagnosis that triggered an absurd protest from Berlusconi's camp.

Fabrizio Cicchitto, who heads Berlsuconi's parliamentary group, even thundered against the "Nazi doctor" and "Stalinist prosecutors." Berlusconi now plans to mobilize his supporters for protests.