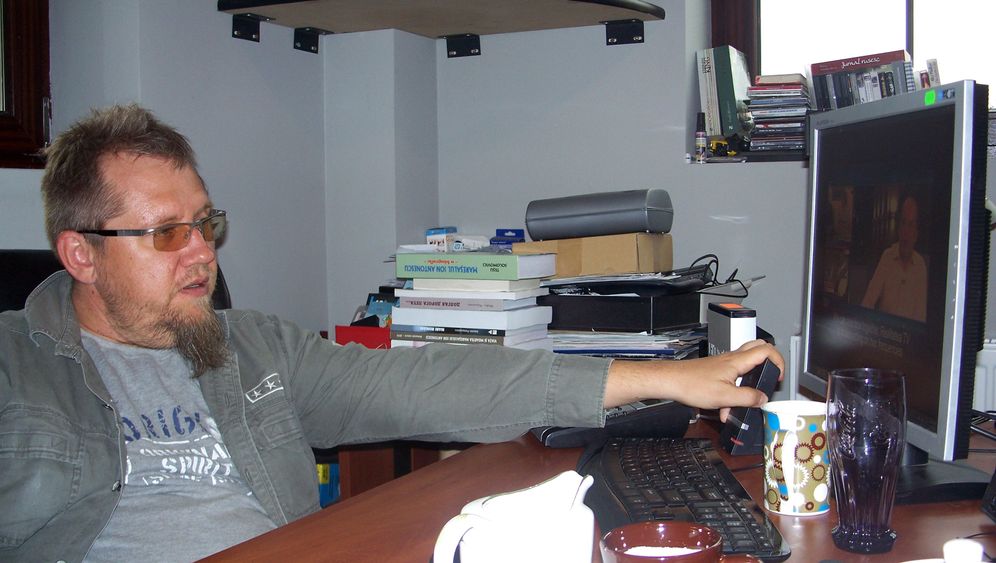 "Hello, Mr. President," filmmaker Florin Iepan shouts. "I would like to introduce you to somebody." The man he is speaking to is Romania's former President Emil Constantinescu, who was in office from 1996 to 2000. He's wearing an elegant white suit and leaving a conference room. "I know what this is about," he says reluctantly. "But I have already expressed my regrets publicly."

"But perhaps you can say something to this man personally," Iepan says. "He came from Odessa just for this." Constantinescu looks at the old man with sympathy and then quickly turns away. "Perhaps another time," he says.

The man is 87-year-old Michail Zaslawski, the sole survivor of one of the biggest crimes committed by Romania during World War II -- the Odessa, Ukraine massacre of Oct. 22-24, 1941. In this short stretch of time, the Romanian army, which was occupying the area as an ally of Nazi Germany, rounded up some 23,000 Jews from around the city and killed them, shooting many and burning others alive in warehouses. Soldiers lobbed grenades at people who tried to flee.

Zaslawski's parents, three sisters and brother -- his entire family -- were murdered. The massacre was in reprisal for a bomb attack by Soviets on the Romanian military headquarters, and was personally ordered by the then pro-fascist dictator Ion Antonescu.

The scene where former Romanian President Constantinescu declines to express his sympathies or even offer his hand to Zaslawski for his loss took place in Bucharest in October 2011, around the time of the 70th anniversary of the massacre. It is one among many such moments in Iepan's documentary film "Odessa," which explores how Romania's political and intellectual elite refuse to address their country's involvement in the Holocaust, not to mention engage in a public debate about who was responsible and how it ought to be remembered.

'A Taboo in Society'

"Odessa" is less of a classic documentary than the documentation of the political campaign that its director has been leading from the western Romanian city of Timisoara for the last three years. In the film, Iepan pointedly confronts his country's political and intellectual leaders, along with the public, about the country's silence about the anti-Semitic crimes of Romania during World War II -- and films their reactions. He confronts politicians in public spaces, disturbs intellectuals at their homes, events or receptions -- and asks them uncomfortable questions about the Odessa massacre. The film also contains footage of multiple radio and television appearances made by the director. Last autumn, he invited Zaslawski to share his story with him during a one-week stay in Bucharest and filmed most of the discussions.

Out of this collection of uncomfortable moments Iepan has created a 1.5-hour film he hopes to show at events and festivals across Romania, where he also plans to record their reactions for a follow-up film. A shorter version of the original film for an international audience will air early next year on German public broadcaster MDR, which helped finance the project along with arts funding from the German state of Hesse.

In Romania, "Odessa" is a unique attempt to come to terms with the past -- with pre-programmed controversies. "The Odessa massacre and similar crimes, which the so-called 'heroic Romanian army' committed in World War II, are still essentially a taboo in society -- also among historians," says historian and Holocaust researcher Lucian Natasa of the University of Cluj. His colleague Victor Eskenasy, who now lives in Frankfurt and works as a journalist, goes even further: "Ever since Romania was admitted to NATO and the European Union, its politicians have been returning to their old traditions, attitudes and convictions. Denial of the Holocaust is once again back in style."

Iepan says up until just a few years ago, he himself knew almost nothing about the Holocaust in Romania. That changed by coincidence: In 2006, public television TVR broadcast the history-themed show "Great Romania." Viewers had the chance to vote on the 10 most consequential Romanian figures in the country's history. Dictator Ion Antonescu placed was on the list of nominees -- without editorial reservations. The show hired Iepan to produce a short film profile on Antonescu.

While doing research for the TVR program, Iepan for the first time read details about the crimes Antonescu's dictatorship committed -- including the Odessa massacre. He learned that Antonescu's Romania was the only country other than Nazi Germany that operated its own concentration camps, in Transnistria. According to the US Holocaust Memorial Museum, between 150,000 and 250,000 Romanian and Ukrainian Jews died at the hands of Romanian and German authorities. It was because of those deaths and other reasons that Antonescu stood trial in 1946 for war crimes and was subsequently convicted and executed.

Iepan's short film painted a negative portrait of the dictator, yet at the end of the TV program he was still voted No. Six on the list of the greatest Romanians. It's no wonder, either: Under the country's last Communist leader, Nicolae Ceausescu, the regime undertook a cautious rehabilitation of Antonescu's image. After 1989, he was temporarily exalted as an official national hero. Parliament honored him in 1991 with a moment of silence. Later streets, plazas and cemeteries were named after Antonescu, and memorials were built for the dictator, although such practices have since been banned by the government. It wasn't until 2004, after the release of a report by a presidential commission of historians, that the Romanian state first officially admitted to its role in the Holocaust. And yet many still see Antonescu as a hero.

Iepan was appalled by the results of the TV show, and he couldn't let the issue go. At first he wanted to make a conventional documentary film about the Odessa massacre, but as his work progressed he came up with a new plan. "It became clear to me that interest in such documentary films in current Romanian society is very limited, that I'd be relegated to a broadcast time in the middle of the night and my film would have had no resonance. That's why I decided to go in front of the camera myself."

Iepan was still careful to avoid the image of presenting himself as some self-righteous hero out to expose historical wrongdoings. "It's not me who is important," he says, "but rather the way it came about. I want to tell the story of the massacre and of Michael Zaslawski in public and continue filming reactions as long as it takes for the word 'Odessa' to remain in the public consciousness as a synonym for the anti-Semitic crimes committed by Romania."

"And I would like a Romanian head of state to go to Odessa, take Michael Zaslawski's hand and in the name of our people ask for forgiveness."

But the chances that 87-year-old Zaslawski will ever experience that apology are slim. Romania's current president, Traian Basescu, has so far refused to make any statements on the issue. One of his former advisors, Hungarian-Jewish politician and human rights attorney Peter Eckstein-Kovacs sought in vain to convince Basescu to make some kind of gesture towards Zaslawski. "For Romania, Odessa and the history of the massacre is unfortunately very, very far removed," says Eckstein-Kovacs.

Zaslwaski himself doesn't believe he will ever receive an apology from Romania. "People there try to keep questions about the Holocaust under wraps," he says, describing the impression he got from his visit to Bucharest one year ago. Today, he lives in modest surroudnings in Odessa, where he spent his entire life working in a mill. The trip he took to Romania was his first to the country whose army had murdered his family.

"When I was in Bucharest, I was told that a Romanian president had already once apologized to the Jewish people for the crimes," he says. "It sounded so incidental. That really hurt my feelings."