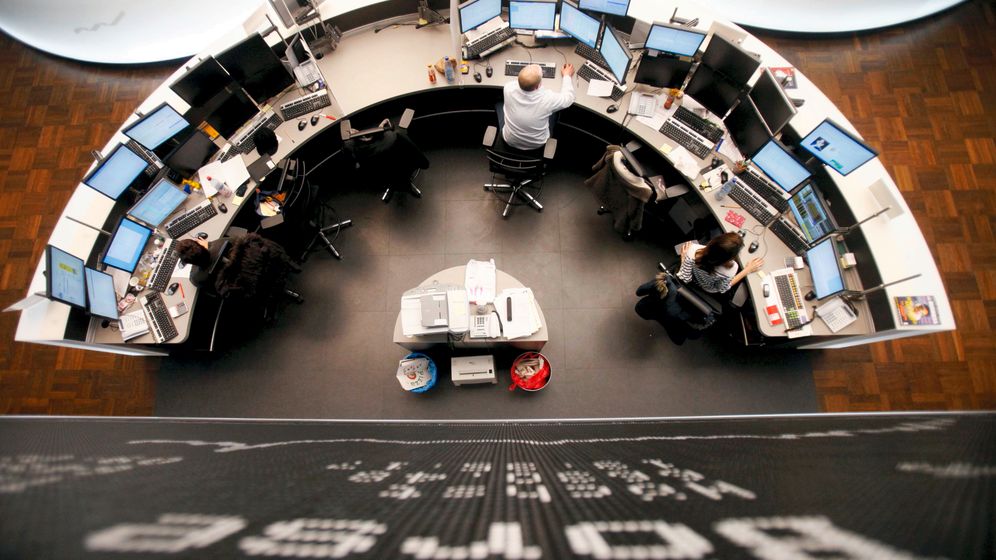 Photo Gallery: The March of the Lobbyists

When European Union Commissioner Algirdas Šemeta meets with representatives of the financial industry, he likes to confront them with impressive numbers. Two-thirds of all Europeans support finally imposing a tax on the people who caused the financial crisis, he says. "We owe it to our citizens to deliver results."

But his plans failed last Tuesday at a meeting of the 27 EU finance ministers. German Finance Minister Wolfgang Schäuble, a strong advocate of the transaction tax, had unsuccessfully warned his counterparts, saying: "We are risking the legitimacy of the European model of democracy."

Speaking directly after Schäuble, Luxembourg Finance Minister Luc Frieden showed why the lobbyists, and not democracy, were going to win out on that day. "We have to think about the competitiveness of the financial industry," he said. The small country between the Mosel and Sauer Rivers earns 24 percent of its gross domestic product with banking products.

"There are many good reasons to exempt the investment industry from a tax on the financial sector," the Association of the Luxembourg Fund Industry had told the country's finance minister before the meeting. In addition to Luxembourg, the Maltese finance minister also voiced concerns. The banking system is the blood veins of the global economy and must be treated with caution, he said.

Josef Ackermann, the outgoing CEO of Deutsche Bank, recently made a big show of thanking British Prime Minister David Cameron, who had called a financial transaction tax "simply madness" and warned that it could lead to the loss of up to 500,000 jobs. The banks, Ackermann said, need London's resistance to prevent such a tax from being put in place.

Lenders Have Adjusted to Idea

Nevertheless, lenders have already long since adjusted to the idea that their transactions in the financial markets will be taxed in the future. At the very latest, financial institutions came to understand that the unwanted tax would come, in one form or other, when French President Nicolas Sarkozy had a related law ratified in the French parliament within the course of just a few weeks and Chancellor Angela Merkel also voiced her support for a transaction tax. The only question is in what form it will come.

The banks are pushing for the smallest possible solution, using Great Britain as a role model, while the European Commission and Germany want to include as many financial products as possible. If they have their way, €57 billion ($75 billion) could be flowing into government coffers by as early as 2014.

To see why, one must look no further than the meager successes of the British stock exchange tax, which only applies to share transactions, which constitute a tiny portion of all financial transactions. Since the introduction of the "Stamp Duty Reserve Tax" of 0.5 percent on the sale price in 1986, many share transactions are no longer being handled on the exchange. Instead, they are traded directly between two parties in the form of a so-called Contract for Difference (CFD).

These CFDs precisely reflect the changes in the price of a stock, but they are not subject to any stock exchange tax. Ironically, a tax is now ensuring that backroom deals are flourishing while the underlying securities are no longer being publicly traded on the exchange.

French Tax Will Only Generate €1 Billion

The French, who have established a financial tax based on the British model, will have similar experiences. Starting at the end of August, transactions involving the shares of major French companies will be taxed. Insiders expect to see the emergence of untaxed financial constructs that precisely reflect changes in the share prices of Total, Renault and other major corporations traded in Paris. In addition, the new tax is only expected to generate about €1 billion in revenues a year.

The plans espoused by Schäuble and the European Commission are much more extensive. They aim to tax not only the trade in stocks, but also all other securities. Derivatives in particular, which derive their value from commodities, real estate indices or changes in the price of shares in companies like German telecommunications giant Deutsche Telekom, will no longer be able to fall through the cracks. Beginning in early 2014, these transactions, which are partly blamed for the global financial crisis, will have to be registered in Europe for the first time. Only then will it be possible to tax them.

For regulatory reasons alone, economists like Hans-Werner Sinn support a transaction tax -- although Sinn is opposed to individual nations going it alone. "There has long been a trend toward increasingly absurd financial instruments that make no economic sense," says Sinn, the head of the influential Munich-based Institute for Economic Research (ifo).

For years, the brightest minds went to the financial industry, only to engage in zero-sum games or even harmful transactions. "A tax could make pointless financial transactions more expensive and unattractive, so that, in the long term, the smartest people would turn to more productive work," Sinn says.

To prevent business from shifting to London or other countries, the tax will be based on the so-called residency principle. This means that banks, as well as hedge funds, insurance companies and investment firms, would also have to pay the tax on deals executed in London or Honolulu. Only when both the buyer and the seller are not from EU countries would the tax not apply.

And what if an American bank in New York, acting on behalf of an EU citizen, purchased the stock of another US bank? That transaction would also be subject to the European tax.

This has a lot of investment banks deeply concerned in the United States. Because they enter into many trading deals with one another, they would be especially burdened by the tax, or else they would have to give up these deals in the future. Computer-based high-frequency trading in particular would be strongly limited. However, this would also substantially reduce risks in the financial markets.

The banks know that they can expect to receive little applause and sympathy from politicians and their voters. To avert criticism, they recently dispatched representatives of the fund industry, which is somewhat inconspicuous, to campaign against the tax.

Their national association presented a horrifying calculation, according to which a German who puts away €100 a month into a voluntary state-subsidized private pension program here called the "Riester" supplement would pay about €14,000 in financial transaction taxes over the course of 40 years.

At the Finance Ministry in Berlin, such scenarios are viewed as the malicious calculations of lobbyists. Officials there point out that the initial issuance of stocks and bonds would remain tax-exempt, and that high taxes would only be payable when sellers constantly reallocate their portfolios. But this is precisely what "was never in the interest of the customer," says Gerhard Schick, the Green Party's financial policy spokesman in the Bundestag, Germany's federal parliament.

It is considered certain -- and desirable -- that a general tax would change practices in the financial industry. The European Commission, the EU's executive, forecasts that 15 percent of securities and 75 of derivative deals would be eliminated in the future because, with the new tax, they would simply not be profitable anymore.

Critics of the financial system, like London economist Paul Woolley, view this as the most important benefit of a financial transaction tax. "It's critical that we increase the cost of potentially dangerous transactions that are also highly questionable from a social standpoint."

These issues will continue to be addressed in negotiations in Brussels in the next few months. Because the British are determined not to participate, Schäuble is still aiming for a solution among the 17 euro zone countries. If necessary, the tax could also be introduced in a coalition of the willing consisting of at least nine countries. For Tax Commissioner Šemeta, the work ahead is clearly laid out. "We must find a compromise," he says.