There are very few people who can speak passionately about statistics and use words like "logical beauty," "great purity" and "pure poetry" when talking about ordinary numbers. But when Nikolaos Logothetis, 57, expounds on numbers, it sounds like a love poem.

"The science of statistics has its own language," says Logothetis, a tall, thin Greek with a carefully trimmed beard and professorial glasses. "We only have to listen attentively to what it has to say, if we want to understand the ills afflicting our country." This is a remarkable statement to make in Greece, which currently has the reputation of being the home of fudged and forged statistics.

It's a sultry July evening in Athens, and Logothetis is sitting in an exclusive restaurant on the city's Kolonaki Square. The mathematician and aesthete became the deputy head of the newly-created, independent Hellenic Statistical Authority (ELSTAT) just a few hours earlier. He has loosened his tie, ordered an after-work beer and, in polished Oxford English, given a short lecture on numbers.

Today was his first day of work at the agency. Logothetis is proud of this fresh start and he plans to introduce radical reforms. "In the future, we will only be accountable to the parliament," he says. "There will no longer be directives from the government. We want to finally be able to work as an independent scientific institution."

"Greek statistics" has become something of a running joke in Brussels and Strasbourg. The term stands for tricks, political manipulation and creative accounting. It stands for the entire Greek tragedy, for the numbers-juggling that drove the country to the brink of bankruptcy, and for the statistical pipe dreams of Logothetis' predecessors -- one of whom has already fled abroad.

But Logothetis doesn't want to talk about the mistakes of the past. He would rather talk about the future. He wants to be one of the men who get Greece's numbers back in order. He wants to make a clean sweep. "If there is even a hint of political influence," he says, "I'll hand in my notice, I promise you that."

There is apparently a sea change underway in Greece these days, the Mediterranean country where, according to one government official, "virtually everyone cheats, and virtually everyone evades taxes." The Greeks, out of necessity, are about to embark on a kind of cultural revolution. The money that has been pledged to save them from collapse comes with stringent conditions.

The so-called troika of the European Union (EU), the International Monetary Fund (IMF) and the European Central Bank (ECB) has been in the country again since Monday of last week. The three auditors are to decide again if the efforts made to date by the government of Greek Prime Minister George Papandreou have been sufficient to warrant the transfer of an additional €9 billion ($11.7 billion) out of a total bailout package of €110 billion over three years, which the euro zone countries and the IMF have pledged to provide. The Dane Poul Thomsen, the Belgian Servaas Deroose and the German Klaus Masuch have taken up residence in the luxurious Grande Bretagne hotel in Athens. The three Europeans have the Greeks trembling with fear because, during their two-week inspection tour through the ministries and agencies, all doors and books have to be opened to the men in dark suits. "We Greeks have long since lost all sovereignty," says one hotel manager. "They are the real rulers in this country."

Uncovering Fraud on a Grand Scale

In addition to Logothetis, the statistician, there is a second man who stands for a possible fresh start in Athens and the desire for change: Ioannis Kapeleris, the head of Greece's financial crimes squad, the SDOE, which was founded in December to combat tax evasion.

Kapeleris, 50, is currently the busiest worker in the Papandreou administration. His workday begins every morning at 7 a.m., in a vast room decorated with Byzantine icons, where three phones continuously ring. This is where he receives his visitors: tired from lack of sleep, smoking, gripping a coffee mug in one hand and wearing a partially unbuttoned shirt.

"Take a look at this," he says, and pulls out a printed Excel table from a pile of documents in front of him. "Here you can see how many cases of tax fraud the Greek state was able to document in the Athens tourist sector in June 2009. Five hundred and six. And do you know how many we found in June 2010? Four thousand, three hundred and forty."

Another table lists the names of doctors, who are considered in Greece to be particularly corrupt. "In May we uncovered 4,357 cases of tax evasion among our doctors," says Kapeleris. "In May of last year it was only 24."

His staff have become very creative when it comes to tracking down tax offenders: They use police helicopters to fly over Athens' affluent suburbs and make films of homes owned by doctors, lawyers and businesspeople. They use satellite pictures by Google Earth to locate country villas, swimming pools and properties. And these tactics have revealed that the suburbs didn't have 324 swimming pools, as was reported, but rather 16,974.

Tax fraud investigators spent a number of weeks on nightclub parking lots in Athens and noted down the registration numbers of luxury sedans. Their investigation revealed that approximately 6,000 car owners have vehicles worth €100,000, but only reported to the tax authorities that they have an annual income of €10,000.

"We are making it increasingly difficult to cheat," says Kapeleris. "And we are making sure that not just the small fish but also the big fish get caught in the net."

The socialist PASOK government has called on the SDOE to drum up at least €1.2 billion in 2010, as outlined in Prime Minister Papandreou's austerity program. In the first six months of this year, however, investigators have already taken in over €1.8 billion in back taxes and fines.

An interim report by the IMF acknowledges "impressive improvements" that have been observed in trimming the government's budget -- although this primarily referred to severe cutbacks to salaries and pensions.

But the auditors will most likely continue to exert pressure on Papandreou. Athens urgently needs to curb skyrocketing costs in the Greek health system, liberalize the labor and energy markets and privatize loss-making state-owned companies -- primarily Hellenic Railways, which owes nearly €10 billion, making it the most debt-ridden railway in Europe.

Privatizations and cutbacks in the public sector -- in Greece, such measures are guaranteed to lead to conflicts. Over the past week, truck and tank truck drivers protested efforts to liberalize their profession in line with EU regulations. The sale of coveted truck licenses has, up to now, ensured that they can retire with ample pensions, but now authorities want to do away with these costly concessions and open up the trucking market.

Was this a sign of much worse conflicts looming on the horizon? The chaos at Greek filling stations that thousands of tank truck drivers unleashed in the middle of the high season provided merely a small taste of the wave of strikes that is expected to roll across Greece over the coming weeks.

Kostas Papantoniou, 59, a civil servant and the vice president of the powerful civil servants' union, predicts that the government will face far more unpleasant times. "They say that Greek civil servants are too expensive and too numerous," says Papantoniou, "but that hardly corresponds with reality. Eighty percent of us earn between €700 and €1,400 a month net. Would you call that privileged?"

There is no doubt, however, that permanent positions in the public sector are often awarded very generously, all too often in the wake of elections. Up until last week, nobody could say precisely how many jobs were concerned. Then the government launched a detailed census on the Internet and had teachers, police officers and firefighters fill out an online form, providing for the first time a clear picture of the number of people on state payrolls. Since last Friday, they now know that it is 768,000. The planned cutbacks in salaries and bonuses will hit many of them extremely hard.

Among the angriest civil servants are those who intend to retire this year. They are actually entitled to a one-off payment from the civil servants' retirement fund that they have paid into for decades -- on average €40,000. But to avoid further burdening the budget, the socialist government has temporarily put a stop to these payments. The idea is to ensure that there is the maximum amount of money possible in the public coffers when they are inspected by the IMF and EU auditors.

By delaying these payments, though, the state is surreptitiously accumulating new debts, argues Athens business journalist George Kyrtsos. "While the government is paying its debts abroad on time, domestic payments are simply being postponed," he says. "This can't work in the long run."

For months now, some 4,000 former employees of the recently privatized Olympic Airlines have been waiting for severance payments from the state. The state has also withheld reimbursements of value-added tax for companies. The amazingly reduced government budget that the Papandreou government intends to use to impress the European Union and the IMF could once again be attributed to very Greek and very creative accounting -- and turn out to be yet another example of the notorious "Greek statistics." 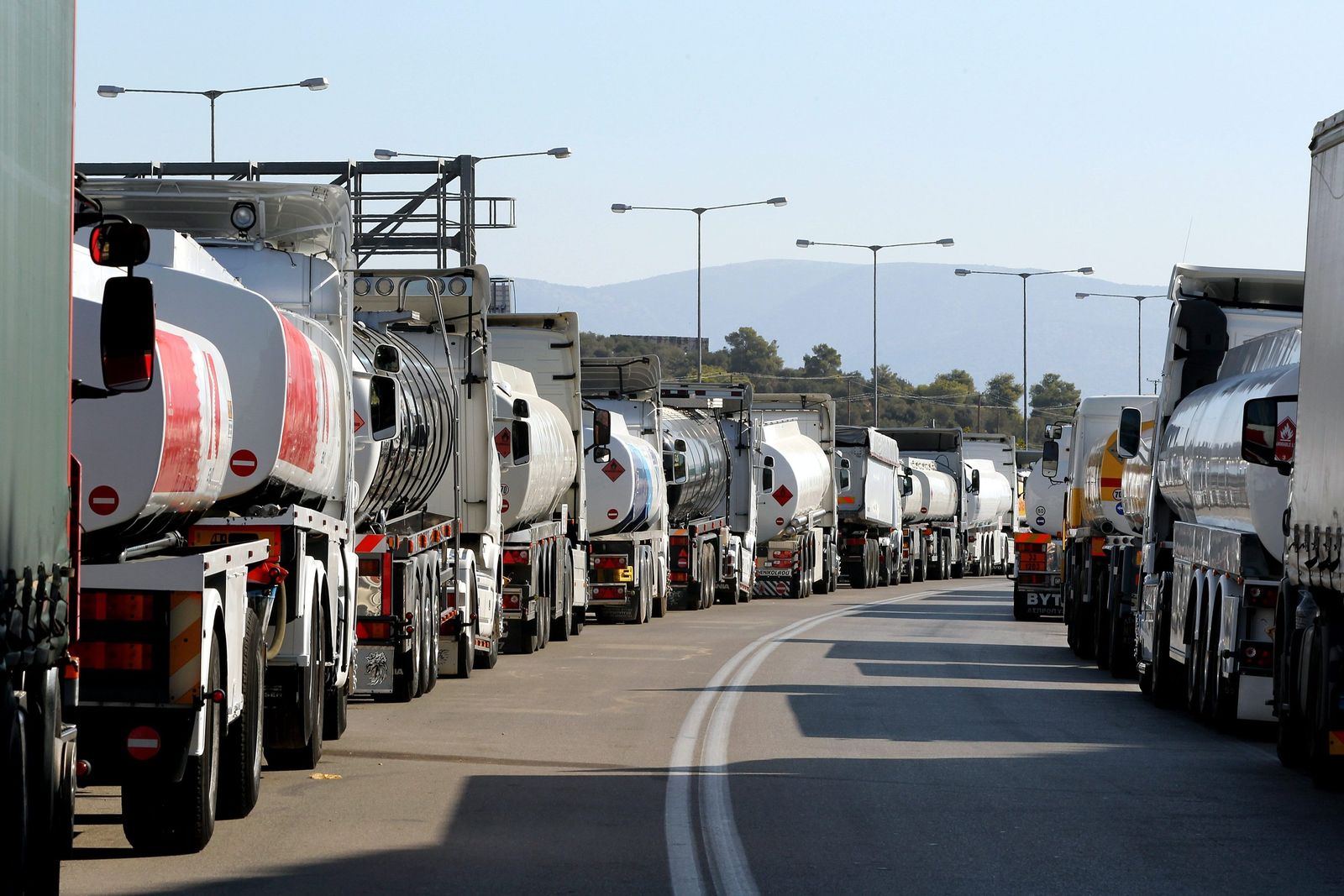